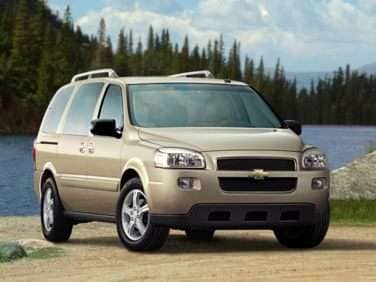 All About Chevrolet Uplander

The Chevrolet Uplander is a four-door, seven passenger minivan. The minivan has become a much maligned vehicle over the course of the past decade. Once hailed as a major innovation due to its high passenger capacity and good interior storage, minivans have had their role usurped by the proliferation of crossover SUV’s which offer better driving dynamics and similar utility. The Chevrolet Uplander, introduced in 2005 in order to replace two of their aging van platforms, is itself a victim of this new market, as General Motors has decided to move away from minivans almost entirely and eliminate the Uplander from its product lineup.

2008 is the final year for the Chevrolet Uplander, and while the van has undergone a number of drive train changes since its inception, the overall styling and feel of the van have remained the same. From the front, the Uplander resembles a slightly truncated version of the vehicle that it replaced, the Venture, which itself can trace its styling lineage back to the early 90’s. The Uplander has a rounded, boxy shape which fits in well with the look of the SUV’s offered by Chevrolet - although the low stance, large greenhouse and dual sliding side doors give it away as a minivan.

There are two trims available for the 7 passenger Uplander. The LS is outfitted with a 3.9 liter V6 engine that produces 240 horsepower, coupled with a 4-speed automatic transmission. This new base engine addresses some of the concerns that had previously been voiced regarding the heavy Uplander feeling underpowered. Inside, the Uplander LS benefits from OnStar, air conditioning, and a driver information center, as well as power seats and door locks. Upgrading to the LT trim gives buyers rear-seat climate controls, second row bucket seats and an upgraded entertainment system. The LS can be had in an extended wheelbase version of the van, while the LT is exclusively available in this length. A cargo version of the Uplander can also be had for those who want to avoid the costs associated with running a full-sized panel van. The Uplander’s feature set is rounded out by power sliding doors, optional Stabilitrak stability control and traction control. A Flex Fuel version of the 3.9 liter V6 is also available.

The front-wheel drive Uplander has good acceleration, but when it comes time to take corners at speed, drivers are instantly reminded that they are in a tall, long minivan that isn’t designed to be taken to the races. While the ride is comfortable, this smoothness has come at the price of road feel and stiffness, meaning that the Uplander is not nearly as pleasant to drive as some of the car-based crossovers that it competes with. Fuel economy is decent but unimpressive, with 16 miles per gallon in town and 23 on the highway. A large fuel tank means that parents can go for over 600 miles between soccer games and school plays before they have to stop and fill up.

One of the primary features that attracts buyers to the Uplander is price. For just over $20,000, Chevrolet offers a reliable, somewhat stylish alternative to higher-priced crossovers and fuel-hungry sport utility vehicles. Unfortunately, the Uplander has lost the battle to these same competitors, and after 2008 there will no longer be a minivan for sale in Chevrolet showrooms.