Introduced just three years ago, the Trax is Chevy’s entry in the hot subcompact crossover segment. What’s a subcompact crossover? Well, you could call it a tall hatchback or a tiny SUV. It’s a segment that didn’t exist until very recently and now includes the likes of the Kia Soul, Honda HR-V, Jeep Renegade, Nissan Juke, Mazda CX-3 and a sibling of the Trax, the Buick Encore. All are built from subcompact car platforms; the Chevrolet Sonic sedan forms the basis of the Trax, sharing an engine, transmission, suspension, brakes, steering and other bits. Last year, sales of the Trax increased at a faster clip than Chevrolet’s larger SUVs, which include the Equinox, Traverse, Tahoe and Suburban.

The 2017 Chevrolet Trax receives a well-deserved facelift. The Trax’s front-end appearance is updated with a new dual-port grille, bringing it into alignment with those of the Malibu, Traverse and Equinox. Also new are halogen wraparound headlamps and available LED daytime running lamps that give the Trax a wider look. Out back, available sculpted LED taillamps add some flair.

For 2017, the Trax is available in base LS, volume-selling LT, and a new range-topping Premier trim that replaces last year’s LTZ model.

One of the nicer elements of the update of the 2017 Chevrolet Trax is its new, Malibu-inspired dual-cockpit dash layout. Attractive, easy-to-read analog gauges replace last year's motorcycle-like units and there's a new driver information display. Materials are upgraded with more soft-touch surfaces and French stitching. Push-button start is available for the first time. Tall, supportive buckets give the driver and front passenger good sightlines via an airy greenhouse. Front seat headroom and legroom are generous and ingress and egress are a snap.

Key to the Trax's appeal to younger buyers is a new standard MyLink infotainment system with six speakers and a 7-inch color touchscreen. All models feature standard Bluetooth and OnStar 4G LTE connectivity for in-car WiFi for up to seven onboard devices. MyLink is also compatible with Android Auto and Apple CarPlay to bring the familiarity of the user's cellphone screen to the in-dash display. SiriusXM Satellite Radio is also standard on LT and Premier models. There are also now two USB ports for charging or streaming content. Best of all, a volume knob returns to the dash, eliminating the need to find the exact spot onscreen for tapping up or down for volume in a moving, bouncing vehicle.

One of the reasons we love SUVs and crossovers is because many of us live in our cars. Here, the Trax doesn't disappoint with lots of cubbies and bins within reach. There are four, count 'em, four cupholders in the center console, which has to be some kind of record for a vehicle this size. Pictured is the slide-out storage drawer under the passenger seat of LT and Premier models. In addition to a decent-size glovebox and a handy bin at the front of the console near the dual USB and 12-volt charge ports, there is also a flip-out coin holder above the driver's left knee that's big enough to hold a phone.

There's room for big stuff, too. Standard on all Trax models is a front passenger seat that can be folded flat. This is great for hauling long items such as 2x4s from the lumber yard, ladders, or skis and such that you want to carry inside the vehicle instead of on the roof.

The Trax offers 18.7 cubic feet of cargo space with the rear seat up and 48.4 with the rear seat down. While that's not much more on paper than the Sonic hatchback the Trax is based on, it's a more useful space because it's tall and square. The liftover height is just about perfect because you don't have to stoop down or reach up to load and unload stuff. A cargo cover is standard and keeps items out of sight. There's also room for small items like a camera or tablet in the spare tire well under the floor. Rear seat up, the Trax offers about as much cargo space as a Kia Soul or Jeep Renegade, more than a Mazda CX-3 or Nissan Juke, and less than a Honda HR-V.

The Trax's back seat also offers decent headroom and legroom, provided the front seats are not moved to the full rear position. The seatback is split 60/40 like most SUVs, but folding requires the bottom cushion to be lifted slightly and flipped down vertically in back of the front seat to permit the rear seatback to fold flat. When no one is seated back there, the rear seat headrests can be pushed down nearly flush with the tops of the rear seat to aid rearward visibility for the driver. One cool rear-seat feature standard on LT and Premier models is a 110-volt outlet at the back of the front console for charging laptops and such.

At $23,995, the 2017 Chevrolet Trax LS with all-wheel drive is the least expensive Chevy you can buy -- car, truck or SUV -- with four driven wheels. That's a big advantage for folks from areas that experience winter weather who are looking for inexpensive transportation. The system defaults to front-wheel drive under normal traction conditions, enaging the tractive capability of the rear wheels only when needed to save fuel. Included on AWD Trax models are 4-wheel disc brakes, upgrading from the standard front-disc/rear-drum setup used on all front-wheel drive versions.

The Trax's standard and only available engine is a 138-hp 1.4-liter turbocharged 4-cylinder. While this engine feels peppy in the 400-lb-lighter Chevy Sonic, its performance in the Trax crossover is, at best, measured. A higher-output version of this engine with direct fuel injection and 153 horsepower is available in the Buick Encore, Trax's corporate sibling, but not in the less-expensive Chevy. Around-town response is decent with the 6-speed automatic transmission, but merging and passing maneuvers need to be planned out in advance. EPA estimates for the FWD Trax are 25 mpg city/33 mpg hwy. The heavier AWD versions drop to 24/30. In a week of mixed driving of an AWD model, we saw an observed 27 mpg.

In addition to standard anti-lock brakes, traction and stability control, plus dual front, front-seat side, front-seat knee and front- and rear-seat overhead airbags, the Trax gets updated safety systems for 2017. A backup camera with trajectory lines that display in the 7-inch infotainment screen is standard on all models. Premier models now come standard with blind spot and rear cross-traffic alerts as well as sonar-based rear parking sensors. Optional are forward collision and lane departure warning systems.

Never mind those hulking SUVs. Spanning just 167.2 inches nose to tail, the diminutive Trax takes up about a half-foot less parking space than a subcompact Chevy Sonic sedan. Easy-effort steering with a tight 35.4-foot turning circle makes it a breeze to maneuver in an urban landscape. It's a small SUV that will fit easily in most any garage and can park just about anywhere you want to.

Making Tracks in the Trax

Making Tracks in the Trax

At the end of the day, the Chevy Trax is an agreeable MINI suv that handles most chores pretty well. Its steering effort is light around town, yet delivers good precision on the highway. Likewise, brake pedal response is decisive and easy to modulate. For a vehicle with a high center of gravity and only 100.6 inches between the front and rear wheels, the Trax rides well and doesn't get all tipsy at the sign of the first turn. The narrow stance and tall profile do contribute to some susceptibility to crosswinds, but overall, the Trax is stable on the highway. Small enough to make parking and maneuvering tight spaces a breeze, yet big enough to carry four adults (five in a pinch) and the odd trappings of civilization from the big box store without busting any budgets, the Trax is credible evidence of why subcompact crossovers are gaining so much favor. 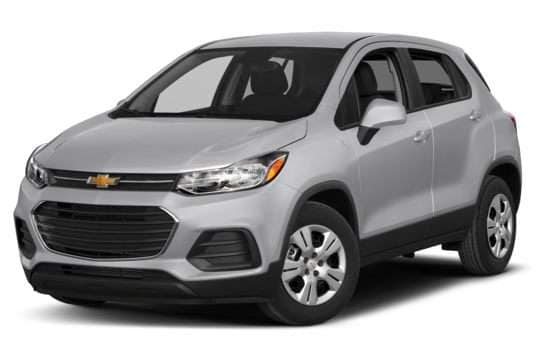