Tiny SUVs are all the rage and the Chevrolet Trax is one of the most popular vehicles in the rapidly growing class. With an attractive starting MSRP, ample interior space, and top-notch safety ratings, Chevrolet’s subcompact crossover offers broad appeal. The Trax delivers a generous suite of features at the base level, with keyless entry, a standard rear-vision camera, and a touchscreen infotainment system packed with connectivity.

The production Chevrolet Trax was first shown at the 2013 North American International Auto Show in Detroit. It was only offered outside the United States in the 2013 and 2014 model years. Chevrolet added the Trax to the US lineup for 2015, due largely to the success of the more upscale Buick Encore.

The Trax has enjoyed a warm reception from US buyers: More than 63,000 were sold in its introductory year, and nearly 30,000 have left dealer lots in the first half of 2016. Trax sales have cooled a bit of late, as buyers await the redesigned 2017 model’s sales debut in the fall. While this may seem like a remarkably quick refresh, coming just two years after the US debut, remember that the Trax was first shown in 2013.

In addition to the Encore, the Trax’s primary competition includes the Jeep Renegade, Honda HR-V, Nissan Juke, Fiat 500X, and Mazda CX-3. The Jeep Renegade is the segment’s current sales leader. If you want to drive a vehicle that shows the sporty potential of tiny crossovers, take a spin in the BMW X1.

All Trax models feature power lumbar support in the driver’s seat. The LTZ adds front seat heaters and six-way power adjustment in the driver’s seat, along with leatherette upholstery, a leather-wrapped steering wheel, rear park assist, and an upgraded seven-speaker Bose audio system with a subwoofer and amplifier. (The Bose system is optional in the Trax LT.) Exterior LTZ features include foglamps and 18-inch alloy wheels, wrapped with 215/55R-18 all- season tires.

The Trax is pleasantly designed, yet hard to differentiate from the crowd. If it weren’t for the identifiable corporate Chevrolet grille and familiar golden Bowtie emblem, it would be tough to tell the Trax apart. While Chevrolet’s sedans have regained distinctive design over their most recent updates, Trax's side profile is a tad on the soft side, other than its aggressive fender bulges. The right color combinations make all the difference and the Midnight Edition option package brings its share of sizzle at a reasonable price.

It’s been said many times that American’s don’t have a fondness for hatchbacks or station wagons, yet each year it seems the crossover is more and more popular. With gas prices (relatively) low, crossover sales have taken off, with the new class of subcompact crossovers gaining the sales that subcompact and compact hatchbacks and sedans have lost. When you get down to it, the crossover is simply a tall hatch with increased interior volume.

A surprisingly spacious and accommodating interior is one of the Trax’s most compelling attributes. The bucket seats are handsome, and the storage opportunities are ample. The rear seat provides 39.2 inches of headroom, 55.3 inches of shoulder room, and 39.9 inches of legroom. A rear-seat center armrest is standard, and so are literature pockets in the front seatbacks.

If your regular routine includes more than your share of hauling stuff, you’ll be pleased with the Trax’s ability to swallow cargo. There’s 31.5 cubic feet of cargo area behind the second row. The 60/40 rear seat folds flat to provide a total of 63.7 cubic feet of cargo area. The Mazda CX-3 provides only 12.4 and 44.5 cubic feet, by comparison. The 2WD Honda HR-V is a bit closer, at 24.3/58.8 respectively.

The dashboard tech and infotainment system in the 2016 Trax are shared with the Chevy Sonic. They represent the Trax's biggest shortcoming. While the motorcycle-inspired dash is acceptable in the Sonic and Spark, given their low MSRP ($13,000 and $14,345 respectively), it’s a disappointment in the Trax, given its starting price of $20,300. The monochrome digital info screen looks (and feels) out of place.

The touchscreen that offers a high-level of value in the budget-priced Spark leaves a bit to be desired in the Trax. Navigation is provided via the BringGo smartphone app, which requires an in-app purchase ($49.99–$59.99) after a 30-day free trial.

Thankfully, the Trax’s dash and infotainment system will be upgraded in the 2017 model year. On a positive note, OnStar Basic is provided for five years in the 2016 Trax, and the OnStar Guidance Plan is offered free-of-charge for the first six months. Also, a 4G LTE hotspot is standard.

The 2016 Chevy Trax is equipped with a turbocharged 1.4-liter EcoTec 4-cylinder engine mated to a 6-speed automatic transmission. A manual transmission is not offered. With just 138 horsepower and 148 lb.-ft. of torque on tap, the Trax is no speed demon. The 0–60 MPH highway merge takes 9.4 seconds with front-wheel drive (FWD) and 9.7 seconds with all-wheel drive (AWD).

The official EPA fuel economy ratings are 26 MPG city/34 MPG highway with FWD and 24 MPG city/31 MPG highway with AWD. These numbers put the Trax near the top of the class, which is led by the 35 MPG (highway) FWD Honda HR-V and Mazda CX-5. Our tester lived up to the official numbers over a week’s worth of testing in mixed summer conditions. The turbocharged Trax is designed to run on regular unleaded gasoline. Tiny turbos are begging to be tweaked, and a higher horsepower 91 octane tune might be advantageous, but is not offered from the factory.

A short wheelbase and high ride height often induce a certain amount of hoppiness in small crossovers and the Trax is not immune to the laws of physics. When the pavement is smooth, all is good. When the road surface gets bumpy, you’ll feel it. Of all the subcompact crossovers, I prefer the Mazda CX-3’s road manners the most. You’ll want to test it and the Trax back-to-back.

The Trax is at the front of the pack when it comes to safety, with a five-star overall safety rating from the National Highway Traffic Safety Administration (NHTSA). The Insurance Institute for Highway Safety (IIHS) gives the Trax a Good rating in all five crashworthiness tests, as well. There are 10 airbags.

How Does the Trax Stack Up?

How Does the Trax Stack Up?

The 2016 Chevrolet Trax feels most at home in the ‘burbs and in town, where its diminutive dimensions are ideal for maneuvering through traffic and into tight spaces. It has neither the off-road pretensions of the Jeep Renegade Trailhawk nor the sportiness of the Fiat 500X, Nissan Juke, or Mazda CX-3. The closest competition is the Honda HR-V, which is based on the Honda Fit platform, as well as the Trax’s more elegant corporate cousin, the Buick Encore.

While the Mazda CX-3 compares favorably in fuel economy, it falls far short of the Trax when it comes to cruising range. The AWD CX-3's 11.9-gallon fuel tank is a fraction of the Trax’s generous 18.8-gallon tank.

As an entry-level subcompact crossover, the Trax fits the bill, though it may not stir the soul. The Midnight Edition option package adds a welcome jolt of visual appeal as we await the all-new 2017 Trax.

The 2016 Trax is covered by a comprehensive set of warranties, including a 5-year/60,000-mile Powertrain/Drivetrain Limited Warranty, along with Roadside Assistance and Courtesy Transportation. The Bumper-to-Bumper Limited Warranty is 3 years/36,000 miles, and 2 years/24,000 miles of Scheduled Maintenance is included.

The name “Trax” is a nod to the Chevrolet Tracker, a rebadged Suzuki Sidekick, which was sold between 1989 and 2004. The Tracker was initially offered under General Motors' short-lived Geo import-fighter brand, which was merged into Chevrolet in 1997. The unibody Sidekick/Tracker was built in Canada for the North American market and was regarded as a competent off-roader and better suited to on-road use than the body-on-frame Suzuki Samurai.

The Trax is also offered with a 1.7-liter turbodiesel 4-cylinder engine in Europe. The turbodiesel delivers considerably more power and efficiency, with 50 percent more torque and nearly 25 percent better fuel economy. Unfortunately, Chevrolet hasn't announced any plans to offer a turbodiesel Trax in the United States. 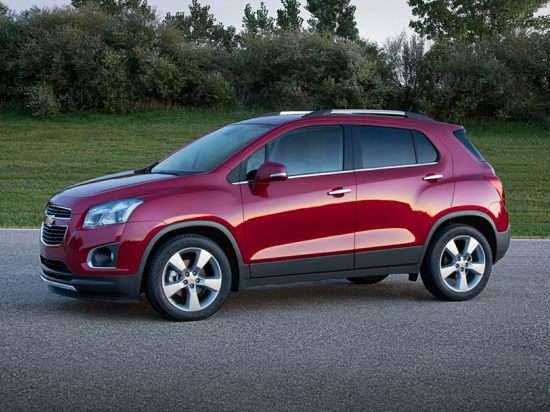