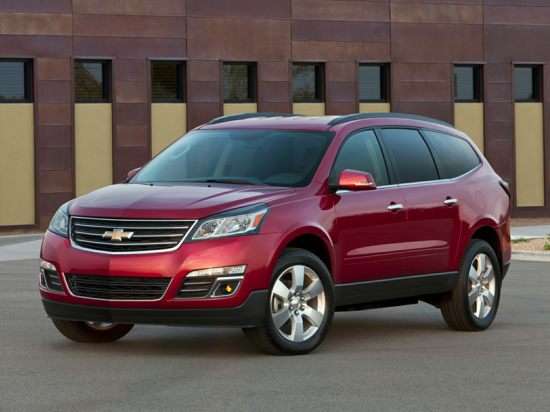 Changes for the 2014 Chevrolet Traverse:

Equipped with 8-passenger seating, the Traverse LS is equipped with everything a family might need in a crossover SUV.

The Traverse LTZ adds leather, heated and ventilated front seats, a heated steering wheel, and several safety technologies. A set of 20-inch aluminum wheels is standard for this model.

Options, depending on trim level, include a navigation system, a surround sound audio system, a rear-seat entertainment system, a Dual SkyScape sunroof, and upgraded safety features.

Regardless of trim level or drivetrain choice, the EPA rates the 2014 Traverse to return 19 mpg in combined driving.

As this summary is written, the Insurance Institute for Highway Safety (IIHS) has not rated the 2014 Traverse. Last year, this model received the highest rating of “Good” in the moderate overlap frontal-impact, side-impact, rear-impact, and roof crush strength tests.

Bluetooth connectivity, a color touchscreen radio with a USB port and an auxiliary audio input jack, and a reversing camera are standard. The Traverse LT adds a front center airbag, and is available with Chevrolet MyLink technology.

The Traverse LTZ gets safety upgrades in the form of Forward Collision Alert, Side Blind Zone Alert, Lane Departure Warning, and Rear Cross Traffic Alert. These systems are optional for the Traverse 2LT model.

Navigation and a rear-seat entertainment system are also offered on the 2014 Traverse.