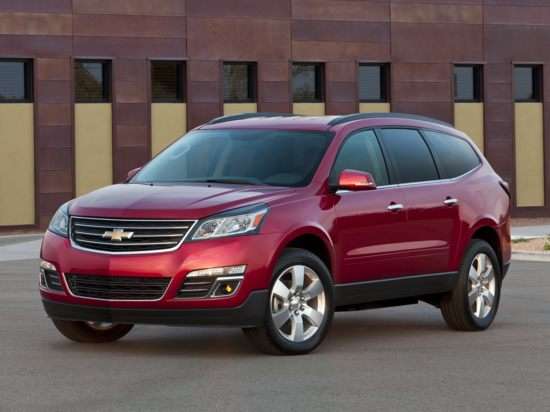 Changes for the 2013 Chevrolet Traverse:

More athletic looks and a more refined driving experience are among the key changes to the 2013 Chevrolet Traverse, long one of the most popular choices among today’s three-row full-size crossovers. The new appearance is most noticeable up front, where the 2013 Chevrolet Traverse’s horizontal grille, restyled lighting treatments, and additional chrome accents provide it with a stronger resemblance to the brand’s car lineup.

In the cabin, designers relied on new, soft-touch materials, contrast stitching, and chrome and silver accents to create a more premium environment that’s also highlighted by a revised center stack—all the better to show off the new MyLink infotainment system offered in the 2013 Chevrolet Traverse. GM’s industry-first front-center air bag also makes its debut in the vehicle, which further benefits from a retuned transmission and suspension that deliver better shift feel and more car-like ride and handling, respectively.

Batting leadoff for the 2013 Chevrolet Traverse team is the LS model, equipped with a Color Touch radio with 6.5-inch color display and AM/FM/CD/HD/USB playback capability along with air conditioning, Bluetooth calling technology, premium cloth seating for eight, a rear-vision camera, and both power windows and power programmable door locks. The exterior of the 2013 Chevrolet Traverse LS is notable for its dual-cavity halogen headlamps, power-adjustable outside mirrors (with integrated blind-spot mirrors), 17-inch wheels, and chrome door handles.

Stepping up to the 2013 Chevrolet Traverse LT, drivers actually get a choice between 1LT and 2LT configurations. Both see upscale interior enhancements like the front-center air-bag system, an eight-way power-adjustable driver’s seat, a leather-wrapped steering wheel, remote vehicle start and a Rear Park Assist feature, and the 2LT model also adds the MyLink connectivity/infotainment system (with premium audio and 10 speakers from Bose), automatic tri-zone climate control, a universal home remote, heated front seats, and an auto-dimming inside mirror.

1LT and 2LT editions see some subtle exterior changes as well, including the addition of 18-inch wheels and heated, power-adjustable outside mirrors; with the 2013 Chevrolet Traverse 2LT, those mirrors also include an auto-dimming function, and drivers enjoy a power liftgate, too.

The 2013 Chevrolet Traverse LTZ is the range-topper, expanding on the features provided by the 2LT model with a memory package for mirrors and seating, an eight-way-power-adjustable passenger’s seat, heated and cooled front-row seats, leather-appointed seat trim, a heated steering wheel, and both Side Blind Zone Alert and Rear Cross Traffic Alert. Chrome accent moldings distinguish the exterior of the 2013 Chevrolet Traverse LTZ, as do its 20-inch aluminum wheels.

The 2013 Chevy Traverse is offered in both front- and all-wheel-drive, and with seven- or eight-passenger seating, depending on model.

A 3.6-liter direct-injected V6, with variable valve timing, is the engine for all models of the 2013 Chevrolet Traverse, but it’s a bit more powerful when configured with the dual exhaust. In that setup, the engine makes 288 hp and 270 lb.-ft. of torque; singe-exhaust models of the 2013 Chevrolet Traverse rely on 281 hp and 266 lb.-ft. of torque. Gear changes come courtesy of a six-speed automatic transmission.

With 5-star ratings for both frontal- and side-crash occupant protection, along with a 4-star result in rollover testing, the 2013 Chevrolet Traverse was awarded a 5-star overall safety score from the National Highway Traffic Safety Administration. The Insurance Institute for Highway Safety (IIHS) also has recognized the 2013 Chevrolet Traverse as a Top Safety Pick, with “Good” grades (the highest rating) for safety performance in front moderate-overlap, side-impact and rear-crash testing, as well as in an evaluation of roof strength for rollover scenarios.

Among the signature technologies offered by the 2013 Chevrolet Traverse are: