Introduction
By Brian Chee
If you have to drive an SUV, you may as well drive a fast one.
And if you don’t want to pay to play – or if you kinda like that whole sleeper car thing – Chevy has a super version of their mass production TrailBlazer that will surely look good in your driveway. Fancy that. buy a 2006 Chevrolet TrailBlazer SS later on this year and you get to make the wife and kids happy – you bought an affordable SUV – and still get to keep a little of your manhood!

Hooray. While the sound of a super TrailBlazer may not ring out as the neighborhood bad boy, it’s likely fast enough and cool enough to win more than a few recruits – especially in the great middle of the nation. Along with the 2006 Malibu SS and Malibu Maxx SS, the TrailBlazer SS brings the Chevrolet SS total to eight, creating a mix that includes cars and trucks with at least some performance heritage.

The idea of marketing high performance variants of commonplace cars is an interesting one that has been around for a while with mostly positive results.

Sad but true – Chevrolet TrailBlazer SS just doesn't strike the same chord as a Jeep Grand Cherokee SRT-8. And maybe, on the road, it isn't supposed to – but special performance cars such as these really earn their keep in marketing dollars and the reflected glow of their sex appeal.

Here's hoping that the TrailBlazer SS, ahem, blazes away in the minds of shoppers. With more performance, exterior sex appeal and interior upgrades, it is certainly improved over its mainstream equivalent. In the end, the question that burns is this: Can I beat that annoying teenager off the line with my new Trailblazer SS with its Corvette-derived LS2 6.0-liter V8 engine?

Production of the 2006 Chevrolet TrailBlazer SS is scheduled to begin in the fall of 2005. Pricing has not been announced, but if the top trim of the Chevrolet TrailBlazer has a sticker price of a little more than $31,000, you can likely bank on the SS version selling for just under $40,000. At that price, it stands a chance of attracting people who want some sport with their suburban lifestyles, but don’t want to shell out more than $40,000 for a performance/luxury import.

The Chevrolet TrailBlazer SS gets a big power spike, thanks to a Corvette-derived LS2 6.0-liter V8 engine, which GM says will generate 391 horsepower and about 385 lb.-ft. of torque. GM also estimates that the Nürburgring-tuned TrailBlazer SS will accelerate from zero to 60 mph in 5.7 seconds. It’s possible to get the Trailblazer SS in either rear-wheel drive or all-wheel drive, and stabilitrak will be standard on the TrailBlazer SS along with a rear –self-leveling suspension. That kind of a performance suspension, with a lowered ride height, makes the TrailBlazer SS look cool and run hot. Also hot is the TrailBlazer SS's composite intake manifold, used in other mid-size trucks and adapted to this engine to help produce balanced torque and horsepower. The Chevrolet TrailBlazer SS comes with 20-inch polished aluminum wheels and four-wheel disc brakes with 12.8-inch rotors at the front.

By adding more power, along with interior and exterior upgrades, Chevrolet has added some nice spice to the TrailBlazer. As a marketing device, it may well infuse this SUV with some eager buyer enthusiasm. And if the price isn't too much more, the SS could make an ordinary ride a little extraordinary. 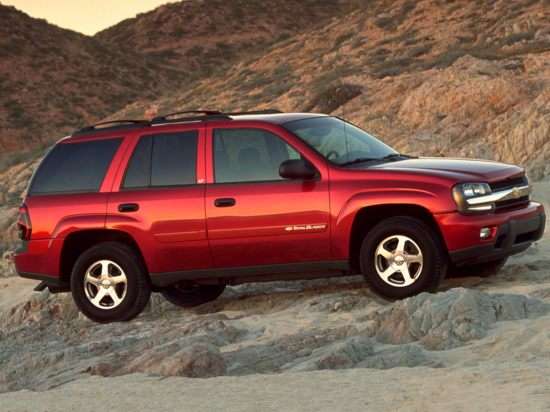