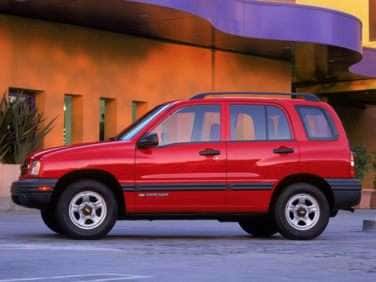 All About Chevrolet Tracker

The Chevrolet Tracker made waves when it was introduced in 1989 as the Geo Tracker. The Tracker was amongst the first of the popular ‘cute-utes’, sport-utility vehicles that were almost toy-like in size but which offered big fun to anyone looking for off-road adventure. Built by Suzuki and sold by that company as the Sidekick, the Tracker became renowned in the 4x4 community for its ease of maintenance, short wheelbase and light weight that made it capable of treading where larger SUV’s would only get stuck. Re-badged as a Chevrolet in 1998, the second generation of the Tracker appeared on the scene in 1999 with a more modern appearance and several key mechanical changes.

The 2004 Chevrolet Tracker differs significantly from the hardy Tracker of old in that it has been ‘civilized’ by General Motors in order to provide a smoother, more car-like ride. Rack and pinion steering, which offer a much better feel for the road combined with greater control help to make the Tracker pleasant to drive around town and on the highway but less rugged on the trail where this delicate setup can be easily damaged by rough terrain. The Tracker’s suspension has also been softened for reasons of comfort, again impacting the vehicle’s ability to navigate more difficult off-road conditions.

Of course, there are a few other positive attributes to be found in the newer version of this sport-utility vehicle. The Tracker now comes exclusively with a 2.5 liter V6 engine which produces 165 horsepower and 163 lb-ft of torque. This is an improvement over the departed 2.0 liter 4-cylinder engine, but the V6 also has to cart around the extra weight of a four-door body style – the only version of the Tracker available for 2004. A 4-speed automatic transmission is also standard.

The Tracker can be ordered with or without four-wheel drive, and while the extra traction is welcome, both fuel economy and handling take a hit when the vehicle is so equipped. Four-wheel drive is not intended to be used on dry pavement, and its use generally limits the turning radius and cornering ability of the Tracker due to the vehicle’s short wheelbase. This same wheelbase can make the SUV feel unsettled at high speeds, and the chassis of the vehicle clearly is not meant to be pushed to the limit on the freeway.

The inside of the Tracker provides decent cargo space behind the rear seats, which fold down if more room is required. Unfortunately, the dated design definitely shows its years when compared against newer SUV’s like the CR-V and the RAV4, which both offer not only more interior room but also higher quality construction and nicer, more modern features.

The 2004 Chevrolet Tracker has traded in the off-road ability that made it unique for the average road manners that now see it coming in behind most of the competition. It is hard to recommend the Tracker to anyone looking for more than the most basic of SUV’s for occasional weekend fun. The Chevrolet Tracker ended production in 2004.