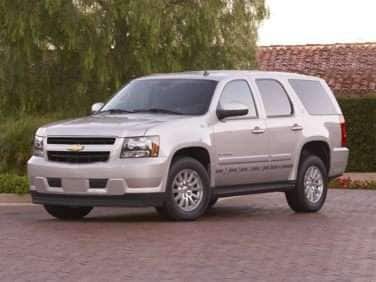 All About Chevrolet Tahoe Hybrid

The Chevy Tahoe Hybrid is powered by a dual displacement 3-liter/6-liter gasoline engine paired to two 60 kW electric motors. Though the Tahoe Hybrid will run on all six liters under full load, it can shut off half the cylinders when they’re not needed to conserve power. A 300-volt nickel-metal hydride battery pack, which is located under the rear seat of the vehicle, completes the drivetrain, which provides a combined output of 379 horsepower. The Chevy Tahoe Hybrid was designed to run on full electric power for a limited range at low speeds, on full gasoline power when necessary, or, ideally, a combination, using General Motors’ two-mode hybrid technology that monitors the truck’s driving conditions to determine and engage the most efficient source of power. General Motors says the Tahoe Hybrid can travel on full electric power at up to 30 miles per hour. A regenerative braking function helps the Tahoe Hybrid retain kinetic energy by capturing and feeding energy that would otherwise be lost through deceleration back to the batter. The Tahoe Hybrid comes standard as a rear-wheel-drive vehicle, with a towing capacity of 6200 pounds, although buyers can upgrade to a four-wheel-drive configuration, which can tow 5900 pounds. Both the rear-wheel-drive and four-wheel-drive versions of the Tahoe Hybrid earned Environmental Protection Agency ratings of 20 miles per gallon city, 23 miles per gallon highway, and 21 miles per gallon combined. The Tahoe Hybrid can accelerate from 0-60 in 8.2 seconds.