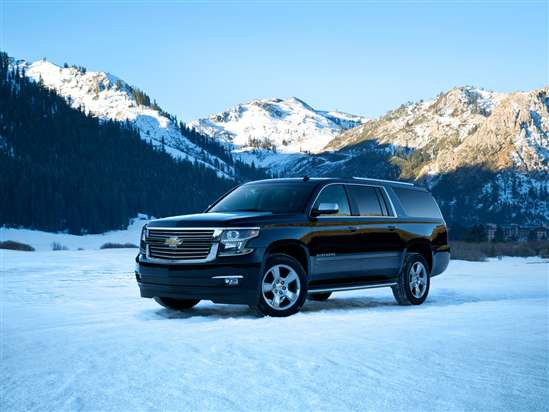 Changes for the 2015 Chevrolet Suburban:

America’s favorite bus for the ‘burbs is completely redesigned for 2015, adding more fuel-efficient yet more powerful engines, offering the latest safety and infotainment technologies, and improving utility with fold-flat rear seats, a change made at the expense of maximum cargo volume.

The 2015 Chevy Suburban is sold in LS, LT, and LTZ trim levels with a choice between rear-wheel and all-wheel drive. Load a Suburban LTZ with all the options, and the price eclipses $77,500.

A new, direct-injected, 5.3-liter V-8 engine is standard in every Suburban, and it features Active Fuel Management cylinder deactivation technology to improve fuel economy by a claimed 10 percent over the previous version of the SUV. Plus, Chevrolet throws in 2 years or 24,000 miles of free scheduled maintenance with every 2015 Suburban.

A 6-speed automatic transmission with a Tow/Haul Mode and automatic grade braking is standard, delivering the power to the Suburban’s rear wheels. Four-wheel drive is optional. When properly equipped, a Suburban tows 8,100 lbs.

Additional improvements for the 2015 model year include new electric steering, DuraLife brake rotors designed to last up to 80,000 miles, and a next-generation Magentic Ride Control suspension for the LTZ model.

Go ahead and get your Suburban with 4WD, because according to the EPA it’ll get 18 mpg in combined driving, just like the 2WD model.

The NHTSA gives the redesigned 2015 Suburban a 4-star overall crash-test rating. Note that regardless of whether you’ve selected 2WD or 4WD, this big Chevy earns a middling 3-star rollover resistance rating. The Insurance Institute for Highway Safety (IIHS) had not performed crash tests on the new Suburban as this summary was written.

In the event that your Suburban does collide with another object, the OnStar Automatic Crash Response service will automatically dial out to rescuers in order to speed assistance – as long as the subscription is active. A new front-center airbag design protects the driver and front passenger from crash forces originating at the opposite side of the SUV from where they are seated.

Chevrolet also loads the Suburban with available safety systems in the form of blind spot, rear cross traffic, lane change, lane departure, and forward collision warning systems, which work in tandem with a Safety Alert Seat designed to grab even more of a driver’s attention. The available adaptive cruise control system is equipped with Crash Imminent Braking in order to reduce speed prior to an unavoidable accident.