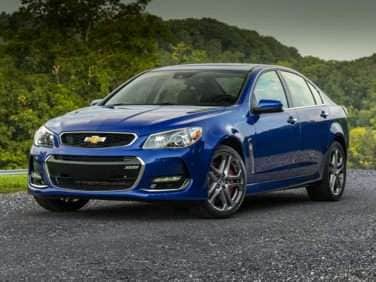 All About Chevrolet SS

The Chevrolet SS is a full-size passenger car manufactured by Holden, a General Motors brand that is sold only outside the United States. The Chevy SS, in its original markets, is also known as the Holden VF Calais and the Holden VF Ute. The Chevy SS is produced in a General Motors assembly facility in Elizabeth, South Australia. All versions of the vehicle (both Holden and Chevrolet brands) went into production in 2013 for release as a 2014 model year car. The Chevrolet SS made its debut in Daytona Beach, Florida, during Speed Week in February of 2013, and although the Chevy SS was also shown at the Canadian International Auto Show in Toronto in 2013, General Motors has stated that the car will not be sold in Canada. United States sales of the Chevy SS will be limited to selected Chevy dealerships that have had particular success in selling the high-performance Corvette and Camaro, due to limited production and availability of the SS. General Motors has already announced that the vehicle will be cancelled in 2017.

The Chevrolet SS is a front-engine, rear-wheel-drive vehicle, and it is available only as a four-door sedan (although the Holden brand also offers a two-door coupe and a five-door station wagon outside of the United States). It is considered a premium vehicle in the Chevrolet lineup, and is positioned above the Chevy Impala in terms of price and performance. General Motors is also positioning the Chevy SS as a replacement for Pontiac’s G8 premium sedan, which was discontinued when all Pontiac production was shut down in 2010 and the brand was canceled.

Powering the Chevrolet SS is a 6.2-liter V8 gasoline engine, and it’s the first time a Chevy rear-wheel-drive sedan has featured a V8 engine in 17 years. The drivetrain in the Chevy SS is shared with the Corvette, and produces an output of 415 horsepower. The drivetrain is completed with a six-speed automatic transmission with steering wheel-mounted paddle shifters so the driver can shift manually, and the car also comes equipped with a clutch-type limited slip differential. There is no true manual transmission option for the vehicle, however. The Chevy SS boasts a 0-60 acceleration time of five seconds flat. The vehicle earned Environmental Protection Agency fuel economy ratings of 14 miles per gallon city, 21 miles per gallon highway, and 17 miles per gallon combined.

The Chevy SS has space to seat five occupants, and is available in only one trim level with limited add-on options. The cabin comes fitted with an eight-inch touchscreen display in the center console, for the Chevrolet MyLink system that includes navigation, dual-zone climate control, Bluetooth wireless integration, Pandora internet radio, Sirius XM satellite radio, and HD radio. To aid driver safety, there is a head-up display projected on the windshield. Other standard features include 19-inch wheels, four-piston Brembo brake calipers with 14-inch front rotors, keyless entry, automatic park assist, a blind spot monitoring system, lane departure warning, electronic power steering, and front collision warning. The cabin is outfitted with high-bolstered leather seats with suede trim and leather dashboard and door panel covering. The only options on the Chevrolet SS are a full-size spare tire and a sunroof.