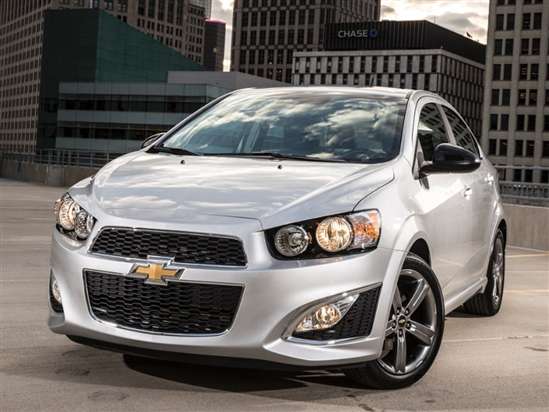 Changes for the 2015 Chevrolet Sonic:

The Sonic is now a mobile Wi-Fi hotspot, thanks to its standard next-generation OnStar system with 4G LTE connectivity. Other news includes a standard turbocharged engine for the Sonic LTZ and a new Blue Velvet paint color.

A 138-horsepower, 1.8-liter 4-cylinder engine is standard in the Sonic LS and LT, paired with a choice between a 6-speed manual and a 6-speed automatic transmission.

For a more responsive powertrain, Sonic LT buyers can upgrade to a turbocharged 1.4-liter 4-cylinder engine that’s standard for the LTZ and RS. It makes the same 138 horsepower, but lower in the rev range where it is more accessible. The turbocharged engine also generates more torque down low where it helps the Sonic feel quite energetic. This engine, too, is available with a 6-speed manual or 6-speed automatic transmission.

The Sonic’s standard engine is rated to get between 28 mpg and 30 mpg in combined driving, depending on the transmission you select, while the available turbocharged engine gets between 31 mpg and 33 mpg. Because of performance-oriented enhancements, the Sonic RS isn’t quite as economical, ranging from 28 mpg to 30 mpg, with the manual proving stingier with each gallon of gas.

Among the heaviest cars in its class, the Sonic also helps protect its occupants with a 5-star overall crash-test rating according to the NHTSA.

The Insurance Institute for Highway Safety (IIHS) also gives the Sonic high marks, the car earning the top score in all except the small overlap frontal-impact test, which is designed to measure how well a vehicle protects the driver in the event a vehicle collides with a tree, a pole, or oncoming traffic on the left front corner of the vehicle. In that test, the Sonic earns a “Marginal” rating.

Hey kids, ever wished your new car could double as a mobile Wi-Fi hotspot? Chevy’s got your new set of wheels. Here’s the deal, though, once you’ve gone through the first 3 gigs of free data, you’re gonna need to pay for it.

The fun doesn’t stop there, though. You can get a Chevrolet MyLink infotainment system for the Sonic, even the cheapest LS model. It’s got a 7-inch color touchscreen and offers smartphone pairing, and if it’s an iPhone you can use the Siri Eyes Free system to make calls, access music and apps, listen to and compose text messages, and more. Plus, MyLink allows you to upgrade the system with an affordable BringGo navigation app that provides Local Search via Google, and a TuneIn app delivering access to radio stations all around the world.

Also, don’t forget that MyLink includes a reversing camera, and that the Sonic is equipped with six free months of standard OnStar services, including Automatic Crash Response, which automatically summons help following a collision, even if you’re knocked out.