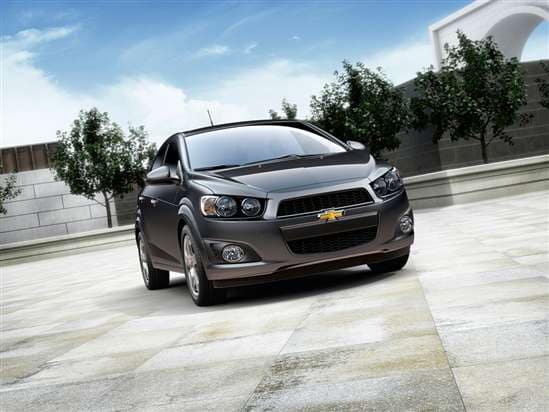 Changes for the 2014 Chevrolet Sonic:

Chevrolet adds safety equipment to the 2014 Sonic including an optional reversing camera and an Advanced Safety Package that includes a lane departure warning system and a Forward Collision Alert system. In 2014, Chevrolet will promote Sonic LT models equipped with fog lights, a power sunroof, and a Chevrolet MyLink radio. Three new colors are also available.

A 138-horsepower, 1.8-liter 4-cylinder engine is standard for all Sonic models except for the RS. A 5-speed manual transmission is standard, and a 6-speed automatic transmission is optional, each delivering power to the car’s front wheels.

When equipped with the turbocharged engine, the Sonic LT and LTZ come standard with a 5-speed manual gearbox, while the Sonic RS has a 6-speed manual transmission. All three models are offered with an optional 6-speed automatic.

As this summary is written, the Insurance Institute for Highway Safety (IIHS) has not rated the 2014 Sonic. Last year, the Sonic received the highest rating of “Good” in the moderate offset frontal-impact test, the side-impact test, the rear-impact injury prevention test, and the roof crush strength test.