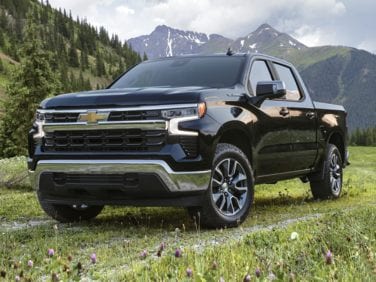 All About Chevrolet Silverado 1500

The Chevrolet Silverado 1500 is a two-door, three-passenger regular cab pickup truck, and a four-door, up to six-passenger extended cab or crew cab pickup truck. Silverado is a nameplate long associated with Chevrolet pickup trucks. For over 30 years, at least some variation of their pickups has borne this particular moniker. The C/K line of Chevy trucks was renamed Silverado across the board in 1999 when both GMC and Chevrolet unveiled their new pickup truck platform. Since that time, the Silverado has appeared in a number of guises, ranging from factory hot rods to trail-blazing off road vehicles. In 2007, the entire vehicle was redesigned, with significant improvements made to almost every aspect of the truck.

The 2008 model is largely unchanged from the one of the previous year, and since the 2007 Silverado was heavily praised by both customers and the general automotive press, this is not a bad thing. From the outside, the Silverado bears a refreshed, chunkier, and more utilitarian appearance that accentuates its image as a hard-working truck. The vehicle’s platform is also longer and wider than the model it replaced, adding much needed space both in the interior and in the cargo area. When it comes to body styles, buyers can choose from a single cab, an extended cab with wide-opening rear doors, or a full four door crew cab that offers enough seating for six passengers.

Things have changed underneath the hood as well. In 2007 the base V8 engine was upgraded from 295 horsepower and 335 lb-feet of torque to 315 horsepower and additional 3 lb-feet of torque, and this holds over to the 2008 model, making it a more potent performing both on the highway and when it comes to pulling and hauling cargo. For those who need the most power possible, a 367 horsepower 6.0 liter V8 engine is also available, although the 8.1 liter big block is no longer an option. That big engine can be put to work in a number of different trims and weight classes, with the Silverado 1500 WT starting at $17,590 and the 1500 LTZ representing the top of the line at a significantly more expensive $31,000 plus. The Silverado can also be had in 2500 and 3500 versions, which increases the overall strength of the pickup in terms of towing ability and hauling capacity. There are a number of specific suspension packages that can be added to the option list, allowing drivers to specify whether they want their truck to be setup for off road use, towing, or performance. Finally, of course, 4-wheel drive is always an option on almost every trim level.

The base Silverado is a good work truck, but it has relatively few creature comforts and a ride that could best be described as stiff. When empty, the vehicle can feel a little rough around the edges, and it is important for drivers to make sure that they order the options and suspension package that best reflect what they will be using the truck for the most often. If the truck is to be used as a daily driver, it is worth the upgrade to the street suspension. When fully outfitted, the Silverado can make its driver feel like they are in command of an impressive, powerful and comfortable truck that is among the best in its class.

The 2009 Chevrolet Silverado is largely a carryover from 2008, with the exception of a new engine and a new transmission option. The are three different weight classes of Silverado pickup available, the 1500, 2500HD and 3500HD. Each of these classes can be ordered in either WT, LT or LTZ trim, with the 1500 gaining an additional LS trim. Furthermore, each version of the pickup can be ordered in either a Regular, Extended or Crew Cab passenger compartment configuration. A Hybrid edition of the truck is also available in 1500 Crew Cab form only.

The 1500 LS offers the same engine choices, minus the V6, and comes in Crew Cab only. The LT expands the ranges to all three cab choices again, and adds a 6-speed automatic transmission option to the mix, along with the possibility of upgrading to a 367 horsepower, 6.0 liter V8 that also produces 375 lb-ft of torque. The LTZ drops the smallest V8 and adds the option of a 6.2 liter, 403 horsepower 8-cylinder that also cranks out 417 lb-ft of torque. Fuel economy information for the latter two engines is not available. The 2009 Silverado 1500 Hybrid features a 332 horsepower, 6.0 liter V8 engine that combines with an electric generator to offer 367 lb-ft of torque and fuel economy that is rated at 21 miles per gallon in city driving and 22 miles per gallon on the highway.

The Silverado 2500HD and 3500HD are equipped with either the 6.0 liter V8 found in the 1500, or a 6.6 liter turbodiesel engine that produces an astonishing 365 horsepower and 660 lb-ft of torque. A 6-speed automatic transmission is standard equipment for both. Fuel economy ratings for the Silverado HD models is not published, and all cab configurations are available.