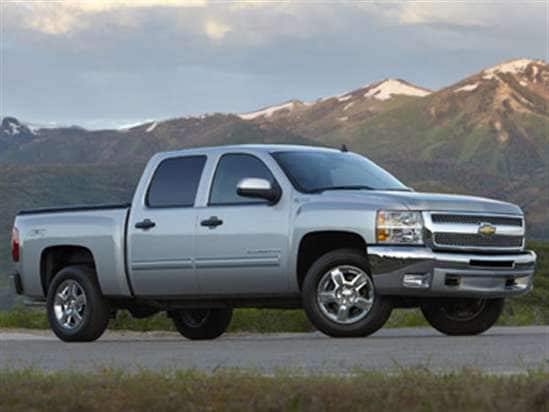 If you’re interested in purchasing a Chevy Silverado Hybrid, you’d better hurry. This is the final year for the fuel-efficient full-size pickup truck. For 2013, there are two new colors: Blue Topaz Metallic and Deep Ruby Metallic.

The 2013 Chevrolet Silverado Hybrid is sold as a crew-cab model with a standard 1HY trim package. A 2HY trim package is optional, and adds leather upholstery with front power-adjustable bucket seats and a center floor console, power adjustable pedals, a reversing camera, rear parking assist sensors, a navigation system, and a Bose premium sound system. Fog lights are also included with this upgrade package, along with power folding side mirrors, auto-dimming glass for the driver’s side mirror, bed rail protectors, and a hard triple-fold tonneau cover for the cargo bed. The 2HY package also includes a universal garage door opener, a rear window defogger, and an auto-dimming rearview mirror.

The 2013 Chevy Silverado Hybrid pickup is equipped with a Two-Mode gas/electric hybrid powertrain. The recipe includes a 6.0-liter V-8 engine equipped with Active Fuel Management technology, which shuts half of the cylinders off under low-load driving conditions in order to conserve fuel, and an Electrically Variable Transmission (EVT) connected to a 300-volt nickel-metal hydride battery pack. The Silverado Hybrid is what’s known as a full hybrid, because it can operate at speeds up to 30 mph on the battery alone.

Total power output measures 332 horsepower at 5,100 rpm and 367 lb.-ft. of torque at 4,100 rpm, and the Silverado Hybrid is offered with rear-wheel drive or 4-wheel drive. Chevy says this truck tows up to 6,100 pounds. An automatic stop/start system is standard, shutting the engine off when the truck is coasting to a stop, or idling in traffic or at an intersection.

According to the EPA, the 2013 Chevrolet Silverado Hybrid is rated to return 21 mpg in combined driving, regardless of whether it is a 2-wheel-drive or 4-wheel-drive model.

In addition to its Two-Mode hybrid powertrain, the 2013 Silverado Hybrid is offered with upgrades that include a touchscreen navigation radio system, rear parking assist sensors, and a reversing camera.