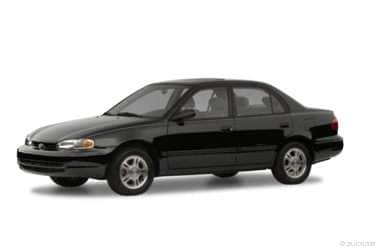 All About Chevrolet Prizm

The Chevrolet Prizm began life as a Geo-badged version of the Toyota Corolla. Geo had been established by General Motors as a way for them to import economy cars from foreign markets without diluting the strength of their domestic brands. The arrangement lasted from 1989 until the end of 1997, when the Geo brand was absorbed into Chevrolet, placing the automaker in the somewhat unusual position of selling a vehicle built by one of its chief rivals. The Prizm was re-designed for 1998 to become one of the most appealing small cars in the entire Chevrolet lineup.

The 2002 Chevrolet Prizm is a four door compact sedan which for all intents and purposes is identical to the Toyota Corolla of the same year. Aside from the vehicle’s mildly face lifted exterior styling, perhaps the greatest giveaway of the Prizm’s Japanese roots can be found under the hood, in the form of a 1.8 liter, 4-cylinder engine. This Toyota power plant generates 125 horsepower and 125 lb-ft of torque at a reasonably low 4200 RPM, making it unusually compliant at low speeds. When equipped with a 5-speed manual transmission, the Prizm returns a spectacular 37 miles per gallon in highway driving, and 31 miles per gallon in the city – largely thanks to Toyota’s variable-valve timing. A 4-speed automatic transmission is also available, with slightly greater fuel consumption numbers.

There are only two trim levels which can be ordered in the Chevrolet Prizm. The entry level model provides air conditioning, power mirrors and power brakes, as well as intermittent wipers and steel wheels. The Prizm LSi is marginally better equipped, adding power windows and door locks and a keyless entry system. Buyers of both models can opt for anti-lock brakes, alloy wheels and a CD player in place of the standard radio or cassette deck. The most high end feature available is a power moon roof.

The interior of the Prizm sports the same general look and feel of the Corolla - a no-nonsense, utilitarian arrangement that makes use of materials that don’t feel bargain basement but which fall far short of being upscale. Seating is reasonably comfortable, although long trips can lead to leg cramping for both front and rear occupants.

On the road, the Prizm acquits itself well, and when the excellent engine is paired with the manual transmission drivers will find themselves zipping in and out of traffic with ease. The Prizm never feels fast, but provided it is not loaded down with cargo or passengers it offers a decent amount of acceleration combined with the solid road-holding feel that is built into most of Toyota’s economy platforms.

The 2002 Chevrolet Prizm is a bit of an odd duck, a competent, barely disguised Japanese import buried at the low end of the Chevrolet lineup. It almost seems as though General Motors was unsure of how to deal with the breakup of the Geo brand. The Prizm was discontinued at the end of 2002 when Chevrolet began to instead import Daewoo-built vehicles to fill the subcompact segment of its lineup.