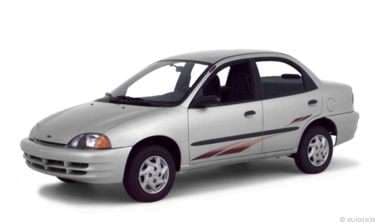 All About Chevrolet Metro

The Chevrolet Metro is a small, entry-level economy car manufactured in partnership with Suzuki. The vehicle has been sold under a variety of names during its almost 20 year production run, with the most familiar alternates known as the Geo Metro, the Pontiac Firefly and the Suzuki Swift. Since 1983 the Metro has enjoyed a cult following amongst those who appreciate the vehicle’s inexpensive operating costs and efficient small-displacement engine. The Metro is one of the smallest cars ever to have been sold as a Chevrolet, a brand more known for its family sedans and pickup trucks than economy hatchbacks.

The 2001 Chevrolet Metro still encapsulates the thrifty values of the original vehicle. Underneath the hood of each Metro is one of two engines designed by Suzuki. The first is a 1.0 liter 3-cylinder that generates 55 horsepower, with the option of upgrading to a 1.3 liter, 79 horsepower 4-cylinder unit. A 5-speed manual or 3-speed automatic transmission can be fitted to either motor. While these power plants may seem quite weak by modern standards, they are more than enough to propel the Chevrolet Metro along at the speed of city traffic – although highway merging and passing are much more of a challenge. The upside of using such small motors is phenomenal fuel mileage: 39 miles per gallon in stop and go driving and 46 miles per gallon on the highway for the 3-cylinder, with slightly lower numbers for the inline 4.

In most other areas, the Metro is also a bare-bones economy machine. The vehicle does come with air conditioning, although using it is to the detriment of passing power. Manual roll up windows are complimented by manual door locks in the base vehicle, along with cloth seats and dual air bags. It is possible to order power locks, power steering and a folding rear seat, but past that, the options list for the Metro is quite sparse. The vehicle is intended as a commuter car, and as such it trades in equipment for weight and cost savings.

In terms of body styles, the Chevrolet Metro can be had as either a four-door sedan or a three-door hatchback, and the interior is fairly spacious for a car with such a small footprint. Despite its low mass and ride height, the Chevrolet Metro is an exceptionally safe vehicle, with a serious amount engineering expertise invested in side impact beams, extensive crumple zones and a rigid chassis that is better equipped for dissipating the shock of a crash than that which was found in previous models.

The 2001 Chevrolet Metro represents an exceptional value for those who are interested solely in reliability and fuel economy. With its stripped interior, lack of luxuries and tiny 3-cylinder engine, the Metro hatchback is one of the most fuel efficient cars ever sold in North America, perfect for in-town city driving, commuting to work, or running errands to the grocery store.**** Production of the Metro was ended after 2001 as General Motors shifted to new subsidiary Daewoo in order to fulfill their quota of re-branded Chevrolet economy cars. The sub-compact replacement was named the Chevy Aveo.