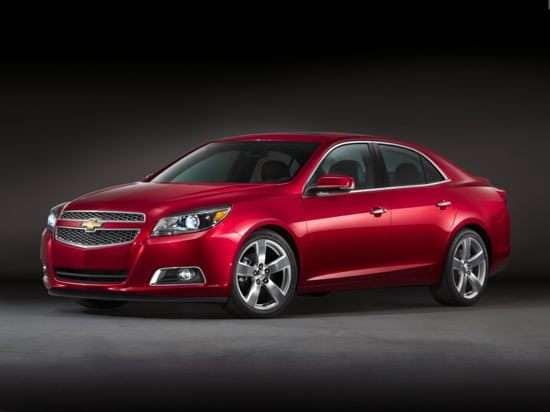 Changes for the 2013 Chevrolet Malibu/Malibu Eco:

Representing an all-new, next-generation take on one of Chevy’s most popular models, the 2013 Chevrolet Malibu is the division’s first mid-size entry designed for the global market, with the brand expecting to sell the redesigned Malibu in more than 100 countries. Of course, the 2013 Chevrolet Malibu will be fine-tuned to meet the specific needs of each marketplace, with U.S. customers, for example, welcoming a dynamically designed sedan that delivers three new powertrains (including one with an eAssist light-electrification system), a premium cockpit that is the quietest Malibu cabin ever, and a full slate of technologies, including Chevrolet’s MyLink infotainment and connectivity feature.

The 2013 Chevrolet Malibu is offered in four basic trim families—LS, LT, LTZ and SA—and each one is further subdivided as follows:

LT—Including 1LT, 2LT and 3LT models, the first step up from the entry point of the 2013 Chevrolet Malibu family adds features like Chevy MyLink with a seven-inch touchscreen, Bluetooth for audio streaming, an eight-way power-adjustable driver’s seat, and a powerful 2.0-liter turbocharged 4-cylinder engine.

Customers can choose from three different powertrains in the 2013 Chevrolet Malibu, including traditional, turbocharged and hybrid setups, and all three boast engines with direct injection and continuously variable valve timing. It all starts with a 2.5-liter 4-cylinder EcoTec engine, capable of making 182 hp and 172 lb.-ft. of torque. For more performance, Chevy also provides a 2.0-liter 4-cylinder unit that’s been turbocharged to produce 259 hp and 260 lb.-ft. of torque. Finally, ensuring the 2013 Chevrolet Malibu Eco lives up to its name, that model welcomes a 2.4-liter 4-cylinder engine mated to GM’s eAssist light-electrification system, which can recapture braking energy, store it in an onboard lithium-ion battery, and then rely on that power for fuel-saving electric-driving assistance in some scenarios.

All models get six-speed automatic transmissions, with Eco drivers benefiting from an upgraded next-gen gearbox.

Unsurprisingly, the 2013 Chevrolet Malibu Eco leads the way here, with EPA grades of 25 mpg city/37 mpg highway/29 mpg combined; in second place is the Malibu when kitted out with its standard 4-cylinder engine, capable of reaching 22 mpg city/34 mpg highway/26 mpg combined; completing the podium is the turbo Malibu, still capable of 30 mpg highway to go with marks of 21 mpg city and 24 mpg combined.

Per the National Highway Traffic Safety Administration (NHTSA), the 2013 Chevrolet Malibu has achieved 5 stars for front- and side-crash protection, along with 4 stars for rollover protection, to achieve an overall 5-star score in the New Car Assessment Program. According to the Insurance Institute for Highway Safety (IIHS), the Malibu is a Top Safety Pick with top scores in all phases of its own testing for front-, side-, rear- and rollover-impact protection.

Leading technologies for the 2013 Chevrolet Malibu include its Chevy MyLink system, which provides interfaces for Stitcher Smart Radio and Pandora Internet radio, hands-free control of audio streaming and smartphones, and a seven-inch color touchscreen. Also in the technology mix are driver-assistance measures like lane-departure warning, forward collision alert, a rearview camera, and OnStar’s Directions and Connections service. Also worth noting: In addition to the entire eAssist powertrain itself, the 2013 Chevrolet Malibu Eco also boasts a stop/start system that shuts off fuel to the engine when the car stops, then seamlessly restarts the car when the driver’s foot comes off the brake pedal.