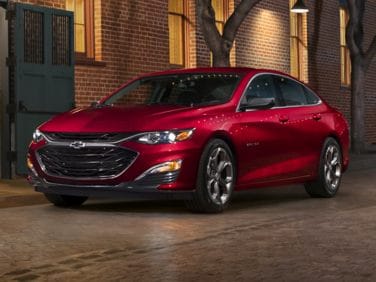 All About Chevrolet Malibu

The Chevrolet Malibu is a four-door, five passenger mid-size sedan. The Chevrolet Malibu has a long history as one of Chevrolet’s primary sedans. Introduced in the 1960’s, the Malibu has seen many different iterations in the ensuing decades. The large sedan of the 1960’s gave way to an even larger one in the 1970’s, before being downsized in the 80’s and then disappearing entirely for a number of years after that. In 1997 the nameplate was revived, and Chevrolet continued to evolve the Malibu into a serious contender for the attention of mid-size buyers looking for value and performance.

For 2008, the Malibu was redesigned and greeted with much fanfare by the automotive press. More than just a skin-deep re-interpretation of the sedan’s appearance, the new Malibu boasts an attractive visual package and a re-worked platform and series of drive train options. A bold, sporty front clip extends out from between two teardrop headlights to give the Malibu a much less pedestrian appearance than its predecessors. The lines of the car are also more muscular, especially where the roof slopes down to meet the rear quarters.

The platform underpinning the new Malibu is a thoroughly updated, extended version of the Epsilon platform, which was co-developed with Fiat and which also provides the basis for several other General Motors vehicles in both North America and Europe. This has lead to improved interior room, despite exterior dimensions that are actually smaller than the previous car. The inside of the Malibu has also benefited from a facelift, and it features more attractive gauges, a sporty dashboard layout, ambient lighting, leather seats and suede accents. A frequent complaint regarding the over-use of hard plastic in Chevrolet interiors has been addressed in the Malibu, and the overall effect is a pleasant deviation from the status quo.

Another welcome change can be found under the hood. The Malibu can be had with three engine choices: a 2.4 liter, 169 horsepower 4-cylinder in the base model, a hybrid version of the same engine, and a 3.6 liter V6 which generates 252 horsepower. The V6 is a capable performer and easily feels the match to any of the power plants offered by the Camry or the Accord, its two chief competitors. All engines come with variable-valve timing and can be mated with a 6-speed automatic transmission – although entry-level trim vehicles only have the option of a 4-speed automatic. The hybrid engine delivers an acceptable 24 miles per gallon in the city and 32 on the highway, but these unspectacular numbers are tied in with the fact that the engine is considered a light hybrid, without the full electrical assistance of a typical hybrid vehicle. Fuel economy is improved over the V6, but is quite similar to the less expensive standard 4-cylinder.

The 2009 Chevrolet Malibu is almost entirely unchanged from 2008, and given the fact that the 2008 model was named North American Car of the Year at the North American International Auto Show, there is little reason for GM to mess with success. The Malibu has finally matured into a true competitor to the Japanese sedans which have long dominated the mid-size market in the United States.

The 2009 Chevrolet Malibu is a carryover from 2008. The 2009 Malibu can be ordered in LS, 1LT, 2LT, LTZ and Hybrid trims. The first four versions of the sedan come with a 2.4 liter, 4-cylinder engine as standard equipment. Rated at 169 horsepower and 160 lb-ft of torque, this unit turns in fuel economy numbers of 22 miles per gallon in the city and 30 miles per gallon on the highway when matched with the 4-speed automatic transmission found in the LS and 1LT. Optional on the 1LT and standard on all trims above that level is a 6-speed automatic which improves highway mileage to 33 miles per gallon. The 2LT and LTZ can also be ordered with a 3.6 liter V6 that improves output to 252 horsepower and 251 lb-ft of torque. The 6-speed auto is the only gearbox option, and fuel economy sinks to 17 miles per gallon around town and 26 miles per gallon during highway cruising.

The 2009 Malibu Hybrid matches a 2.4 liter 4-cylinder engine with an electric propulsion system that together generate 164 horsepower and 159 lb-ft of torque. Fuel mileage is a healthy 26 miles per gallon in stop and go driving and 34 miles per gallon on the highway.