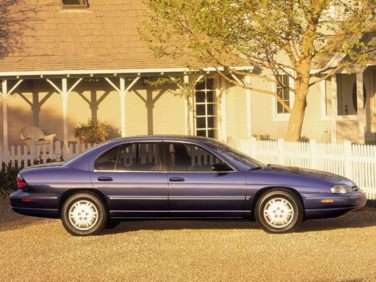 All About Chevrolet Lumina

The Chevrolet Lumina was a grand experiment from General Motors when it came to branding at the beginning of the 1990’s. Released as a two-door, a four-door sedan and a minivan (all three bearing the same name), the Lumina caught the market by surprise. Many buyers didn’t know what to make of the unique three-pronged approach, and the Lumina minivan was removed from the Chevrolet lineup towards the middle of the decade. The coupe was renamed the Monte Carlo in 1995, but the Lumina sedan soldiered on until the year 2001 as a mid-size, entry-level offering.

The 2000 Chevrolet Lumina has been reduced to a single trim level, reflecting Chevrolet’s decision to focus primarily on fleet sales to car rental and taxi companies as well as municipalities. The sole engine to be found in the sedan is a 3.1 liter V6 engine which produces an adequate 200 horsepower, married to a 4-speed automatic transmission. The front-wheel drive Lumina is biased more towards returning good fuel economy than thrilling performance, and at 20 miles per gallon in the city and 30 on the highway it does an impressive job at keeping costs down at the pump for a mid-size car.

The Lumina’s styling also tends toward the middle of the road. With a rounded, almost flattened torpedo shape the 2000 Lumina has lost the sharp, protruding front end of the previous generation. The vehicle is non-descript but certainly not ugly, a good balance for those looking for basic transportation that isn’t boxy and dull. The Lumina comes fairly well equipped with power windows, cruise control, air conditioning and a decent stereo. A la carte options include a CD player, keyless entry, anti-lock brakes and GM’s OnStar system. The car is roomy throughout, with comfortable seating for four adults and good leg room in the rear accommodations matched with a trunk that can handle a fair amount of cargo.

Driving the Lumina reveals some of the weaker aspects of the vehicle’s aging platform. It has been 5 years since the sedan has received serious attention from Chevrolet designers, and during that period the expectations of the average driver have moved on. While the vehicle’s suspension provides a comfortable ride, the 3.1 liter engine fades on steep grades when under load and steering can be vague enough to cause worry on tight corners, particularly at highway speeds.

The Lumina is positioned as a family car, but given its lack of power, it is difficult to recommend it to anyone planning on loading it up with kids and luggage for a weekend getaway. The fact of the matter is that even in Chevrolet’s own lineup, there are much better options than the Lumina including the larger Impala and the new Malibu. The Lumina has become somewhat of an anachronism on Chevy lots, a vehicle whose time has clearly passed, and one which is simply waiting to be put out to pasture.

At the end of the 2000 model year, the Lumina became a fleet-only offering, and was phased out entirely after 2001 and replaced by the Impala.