When you hear someone say "Chevrolet Impala," what comes to mind? Most likely two things: the big, handsome vehicles from the late fifties and sixties, and the vehicle they offer you as an upgrade when you're at the car rental counter. With the 2014 Impala, Chevrolet is aiming to eliminate the latter perspective and replace it with the former.

The 2014 Impala is quite the looker. Whereas the last-generation Impala was just a blob on the roads, Chevrolet's designers decided to give the new model some style. Up front, the 2014 Impala has a resemblance to the Chevrolet Camaro with a narrow grille and headlights. A sculpted hood and LED daytime running lights add a touch of class. Along the Impala's side are two distinct character lines and your choice of eighteen, nineteen, or twenty-inch wheels.

Inside, the 2014 Impala is very impressive. There are an abundance of soft-touch materials and chrome trim throughout the interior. Front-seat passengers get power seats with heating and cooling features. Back-seat passengers get loads of head and legroom, and the benefit of heated seats. The Impala also comes with the next-generation of Chevrolet's MyLink infotainment system which provides navigation, a variety of audio options, and applications you can use with the system.

Under the hood of the 2014 Impala, you have the choice of three engines:

All engines are paired with a six-speed automatic.

Fuel economy for the 2014 Chevrolet Impala is rated at: 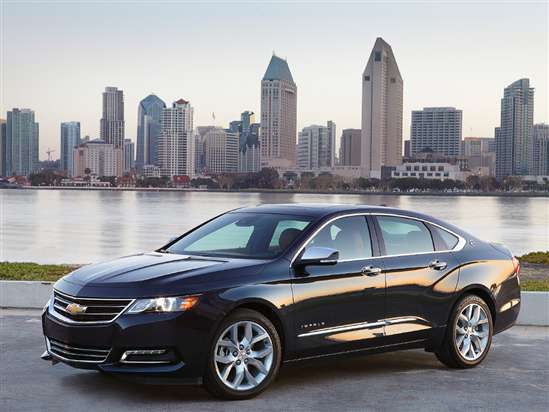