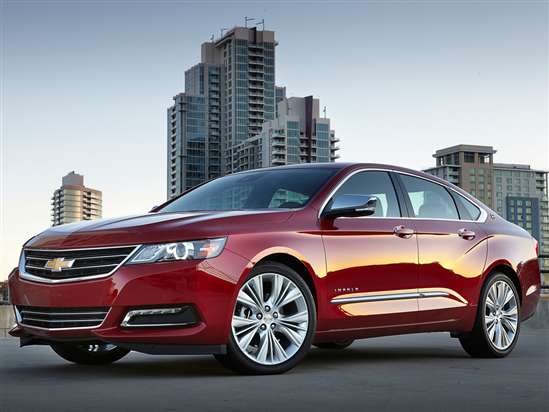 Changes for the 2014 Chevrolet Impala Limited:

With the arrival of a redesigned 2014 Impala, the existing model is re-named the Impala Limited, and will remain in production to serve business buyers for as long as they want the car.

A 300-horsepower, 3.6-liter V-6 engine is standard for every 2014 Impala Limited, the power sent to the front wheels through a 6-speed automatic transmission.

Neither the National Highway Traffic Safety Administration (NHTSA) nor the Insurance Institute for Highway Safety (IIHS) has published official crash-test ratings for the 2014 Impala Limited as this article is written. Last year, the NHTSA gave the 2013 Impala a 4-star overall crash-test rating. However, consumers should note that in the side-impact test, the Impala provided 2-star protection for the driver. Crash-test scores from the Insurance Institute for Highway Safety (IIHS) are “Good” in the moderate overlap frontal-impact and side-impact tests, and “Acceptable” in the roof crush strength and rear-impact injury prevention tests.

Every 2014 Impala Limited is equipped with standard Bluetooth and OnStar telematics. For a limited time, the OnStar system provides free Automatic Crash Response service. Automatic Crash Response activates if the cars airbags deploy, putting a service representative in touch with the Impala’s occupants to check their condition, and the representative can send emergency responders to the Impala’s exact location.