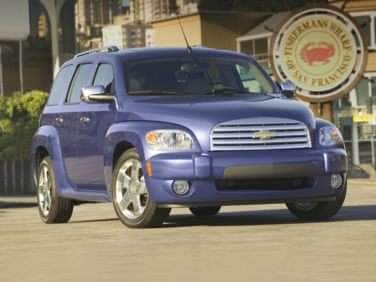 All About Chevrolet HHR

The Chevrolet HHR is a four-door, five passenger compact wagon. Several automobile manufacturers were able to capitalize on the retro-design craze which swept over the market at the beginning of the decade. Two of the most spectacular success stories were the Volkswagen New Beetle and the Chrysler PT Cruiser, with the latter in particular finding popularity far beyond the expectations of its designers. It was clear that there may still be gold left to mine in this styling direction, and with this in mind, Chevrolet came in on the tail end of the trend in 2006 with the Chevrolet HHR.

The Chevrolet HHR is a station wagon that bears a strong resemblance to a stubbier, more fleshed out PT Cruiser – no real surprise, since both were designed by the same person. Whereas the Cruiser was an exercise in thin grace, the HHR is bulkier, with thicker lines that hint at a more utilitarian function. This is no accident – Chevrolet intends the HHR to be reminiscent of the panel wagons it once produced in the 1940’s and 50’s. In fact, the HHR is even available in panel-configuration, with no rear glass to get broken during deliveries.

On the inside, the HHR continues to be functional and practical. All passenger seats fold flat to accommodate extra cargo, although there are not many storage compartments for smaller items built into the vehicle. The compact size of the HHR can definitely be felt in the rear seats, and even some drivers might have to content with a ceiling that is lower than they are comfortable with. Heated leather seats are optional, and OnStar and Stabilitrak stability control are standard features for all trim levels.

Under the hood, there are three options. The base LS and LT versions of the HHR come with a 2.2 liter, 175 horsepower 4-cylinder engine. In the LT, a 2.4 liter engine is available which generates a more potent 172 horsepower. Both of these engines can be had with a 4-speed automatic or a 5-speed manual transmission, and both are up to the task of pulling the front-wheel drive HHR along with more than adequate acceleration and excellent fuel economy. The smaller motor turns in 22 miles per gallon in city driving and 30 miles per gallon on the highway. For those who really want a wagon that screams performance, there is the HHR SS. With a sport suspension and the same turbocharged 2.0 liter Ecotec engine as the Cobalt SS, the 260 horsepower HHR SS is a definite thrill ride and looks the part too, with a more aggressive appearance package and upscale interior. The SS has a number of performance feature built in, such as Launch Assist which helps deal with traction loss during high-speed takeoffs, and No Lift Shift which allows drivers to shift the manual transmission without taking their foot off the gas, keeping boost up between gear changes and improving power delivery.

With so many different versions of the HHR available, it almost seems as though Chevrolet has tried to be all things to all people. The HHR is fit for carrying a reasonable amount of cargo, a family on vacation, or in Panel form even useful as a company vehicle for light hauling and transport. While some buyers might find the styling to be a little over the top, it is a risk that Chevrolet has decided to take in order to generate more excitement over their compact vehicles.

The 2009 Chevrolet HHR is a carryover from 2008. The 2009 HHR offers both passenger and panel body styles and several trim levels for each. The LS and 1LT trim are provided with a 2.2 liter, 4-cylinder engine that produces 155 horsepower and 150 lb-ft of torque. A 5-speed manual is found in the LS with the option of a 4-speed automatic, while the LT sees the auto tranny as standard equipment. Fuel economy for this engine comes in at 22 miles per gallon in city driving and 32 miles per gallon on the highway. The HHR 2LT is afforded a 172 horsepower, 2.4 liter 4-cylinder motor that also cranks out 167 lb-ft of torque. A 4-speed auto is the only transmission choice, and fuel mileage is identical to the smaller motor. Both of these engines can also run on E85 Flex Fuel.

The 2009 HHR SS is outfitted with a 2.0 liter, turbocharged 4-cylinder engine that provides a spirited 260 horsepower and 206 lb-ft of torque. Fuel economy is reduced to 21 miles per gallon in city driving and 29 miles per gallon on the highway, and both 5-speed manual and 4-speed automatic transmissions are available