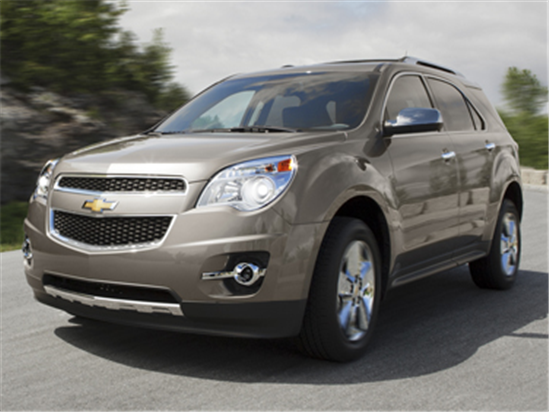 Changes for the 2013 Chevrolet Equinox:

The 2013 Chevrolet Equinox gets a significant upgrade in content for the new model year, highlighted by a new V6 engine that delivers more power than the unit it replaces, but without sacrificing fuel economy. Also improving performance is a newly available FE2 suspension package, while other fresh features include Chevy’s MyLink Radio with Navigation, an eight-way power-adjustable front-passenger seat, a rear-seat entertainment system, a universal home remote and three additional exterior colors: Champagne Silver Metallic, Atlantis Metallic and Tungsten Metallic.

Following the traditional Chevy template, the 2013 Chevrolet Equinox is available in three trim levels: The starting point is the LS model, available solely with an I4 engine; the LT trim brings two increasingly enhanced levels of premium amenities and technologies, as well as an optional V6; and the range-topping LTZ provides the most premium environment and also offers the V6. Additionally, Chevrolet provides an available all-wheel-drive system across all trim levels.

The standard powertrain for all 2013 Chevrolet Equinox models pairs a six-speed automatic transmission with a 2.4-liter, direct-injection I4 engine that makes 182 hp and 172 lb.-ft. of torque. In the LT and LTZ trim levels, customers can opt for the new 3.6-liter V6, also with direct injection; this engine delivers 301 hp and 272 lb.-ft. of torque, marking increases of 37 hp and 50 lb.-ft. of torque as compared to the V6 in the 2012 model.

The 2013 Chevrolet Equinox is a Top Safety Pick of the Insurance Institute for Highway Safety (IIHS); in testing for the New Car Assessment Program of the National Highway Traffic Safety Administration (NHTSA), the Equinox received a four-star overall rating, with four stars awarded for frontal and rollover crash protection and five stars for side crash protection.

Among the key technologies in the 2013 Chevrolet Equinox are its MyLink infotainment and connectivity system, which enables voice- and touchscreen-control over key vehicle features, including audio resources (backed by interfaces for Pandora and Stitcher SmartRadio), Bluetooth for hands-free calling and audio streaming, and full-function nav capabilities. Back-seat passengers also get a tech upgrade, thanks to an available entertainment system with dual displays and wireless headphones. And all occupants will benefit from Equinox safety technologies like Forward Collision Alert and Lane Departure Warning: a programmable, power-operating rear liftgate; and, on I4 models, Active Noise Cancellation.