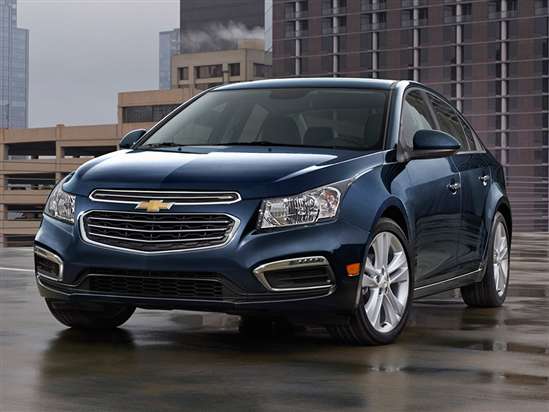 Changes for the 2015 Chevrolet Cruze:

The 2015 Chevy Cruze lineup continues to offer LS, LT, 2LT, LTZ, Eco, and Diesel models, some of which can be optioned with a racy-looking RS Package.

There are three different engines offered for the 2015 Cruze. The LS model features a 138-horsepower, 1.8-liter 4-cylinder engine. So do the LT, 2LT, LTZ, and Eco models, but the difference is that in these versions of the Cruze the engine is a turbocharged 1.4-liter 4-cylinder that makes its power, and greater torque, at lower rpm, resulting in a car that feels more responsive.

With either engine, a 6-speed manual gearbox is standard, unless you’re getting the Cruze 2LT or the Cruze LTZ. Those versions get a 6-speed automatic. Cruze Eco models come with either transmission, and get aerodynamic tweaks and other modifications in order to eke out higher fuel economy ratings.

Of course, if you want a fuel-efficient Cruze, look no further than the Diesel model. Not only is this the most powerful version of the car, thanks to 151 horsepower and 264 lb.-ft. of torque from a 2.0-liter 4-cylinder turbo-diesel engine, but it’s also the thriftiest model, boasting up to 46 mpg on the highway.

The 2015 Cruze is structurally identical to the 2014 Cruze, which received a 5-star overall crash-test rating from the NHTSA and earned top ratings of “Good” from the Insurance Institute for Highway Safety (IIHS) in all tests except the small overlap frontal-impact assessment. That test produced a “Marginal” rating.

This year, Chevrolet upgrades the Cruze’s standard OnStar services package, adding natural voice recognition and 4G LTE connectivity that turns the car into a mobile Wi-Fi hotspot. The Internet service is free for the first three months or 3GB of data usage, while other OnStar programs are available without a subscription for the first six months of ownership. They include Automatic Crash Response, Turn-by-Turn Navigation, and more.