Does the world need more small, diesel cars?  The answer to that question is a resounding ‘yes.’  While market and media focus might sometimes make it seem as though hybrids or electric cars are the only alternative fuel fish in the sea, in truth diesel has made enormous in-roads outside of North America due to its winning combination of power and efficiency.

Until very recently, if a U.S. resident wanted to pilot a diesel passenger car that didn’t wear a luxury price tag it was necessary to visit a Volkswagen showroom.  The 2014 Chevrolet Cruze breaks VW’s stranglehold on the compact diesel car segment, and it also banishes the ghosts of GM’s diesel past, a tableau haunted by the soot-spewing, clattering monsters that played a key role in driving American buyers away from this alternative fuel in the first place.  Like a phoenix rising from its own ashes, the Chevrolet Cruze Diesel stands tall above diesel’s domestic funeral pyre and points the way towards its potential revival in America.

The 2014 Chevrolet Cruze Diesel comes in a single trim level that can be customized via several options and packages.  For an MSRP of $24,885, the Chevrolet Cruze Diesel delivers the MyLink vehicle interface, power windows and door locks, Bluetooth connectivity, power adjustments for the driver’s seat, cruise control, a leather-wrapped steering wheel with audio controls, heated leather seats, and 17-inch rims.  On the outside, the car gains low-rolling resistance tires as well as a few aerodynamic improvements not found on non-Eco models of the car.

Chevy fans who are thinking that the Cruze Diesel is equipped essentially identically to the 2LT trim – albeit at a $2,000 price premium – you are correct.  The fact that the Diesel trim level is the most expensive of all Cruze models is not reflected in its features list, as the less dear LTZ comes with more creature comforts for less money.  My test vehicle came with a few bottom-line boosters such as the Convenience package (rearview camera, heated mirrors), a sunroof, and navigation, bringing the total price to $27,770.

The 2014 Chevrolet Cruze Diesel doesn’t go far out of its way to call attention to the fact that there are no spark plugs to be found under its hood.  From the outside, the Cruze Diesel’s secret identity is betrayed only by a discrete ‘2.0 TD’ badge on the rear and a special set of 17-inch rims.  In order to help the sedan cut through the air as effectively as possible, the Diesel model gains the active grille shutters and other assorted aero bits originally found on the Cruze Eco, and it also features low-rolling resistance tires in a bid to improve its frugality at the fuel pump.  Although not as sporty-looking as when wearing the RS package’s body kit, the Cruze Diesel is still a handsome small car.

As indicated in my discussion of the 2014 Chevrolet Cruze Diesel’s pricing structure, the additional costs associated with the turbodiesel model pay for its drivetrain, not any premium extras.  This means that the passenger compartment of the compact sedan is identical to that of the 2LT, with attractive fabric mesh webbing its way across the dashboard and door panels and a fair amount of harder plastic splashed throughout its cabin.  It’s a nice place to spend some time, from an entry-level car perspective, but its personality does clash somewhat with the higher price point of the Diesel model.

Keeping diesels clean from an emissions perspective requires some engineering ingenuity, and, in the case of the 2014 Chevrolet Cruze Diesel, this means the installation of a urea tank for its exhaust treatment system in place of a spare tire.  Chevrolet includes a fix-a-flat inflation device with the car, and trunk space stays solid – and unchanged – from the year before, but until they start making run-flat low-rolling resistance tires I recommend you keep your roadside assistance dues paid up.

The 2014 Chevrolet Cruze Diesel continues to offer the base model’s comfortable front and the rear seating positions, and the driver’s view of the road ahead – and behind – is excellent (with the latter becoming rarer and rare as rooflines plunge more dramatically downward).  It’s also important to note that the Cruze Diesel’s interior is as quiet as that of a gasoline car.  Yes, occasional clatter might intrude from the admittedly noisy-from-outside-the-car diesel mill, but at speed there’s really nothing to indicate – sonically, at least – that the Cruze isn’t burning 87 octane.  Kudos to GM’s sound insulation team for keeping the interior of the Cruze Diesel serene and calm.

The 2014 Chevrolet Cruze Diesel keeps things simple, with all of the major comforts present and accounted for save one: automatic climate control.  Call me old-fashioned, but I feel that when you pay $25k for a car it should at least keep you comfortable without asking for you to constantly jiggle with vents and heating dials.  I don’t quite understand why the Diesel doesn’t provide this feature, as it doesn’t make sense to ‘protect’ the LTZ trim level given its different customer base, but at least there are heated seats to keep you toasty on colder days.

One nice piece of gear that I was pleased to see included as standard with the Chevrolet Cruze Diesel is the Chevrolet MyLink system.  Consisting of an LCD touchscreen mounted at the top of the car’s center stack – and paired with enough redundant hard buttons that it’s really not necessary to actually make contact with the screen for most basic commands – MyLink is an intuitive interface that does a good job of looking great while it ties together communications and multimedia features.  Although I had trouble getting the Cruze Diesel to pair my Android phone with the MyLink system, I assume this was tied to having been paired to a different Chevy product just a few hours earlier, as it’s the only difficulty I’ve ever experienced in using MyLink across several models.

The 2014 Chevrolet Cruze Diesel comes with disc brakes both front and rear, an upgrade over the base Cruze that reflects the increased power offered by the model.  Side impact airbags for front and rear passengers, side curtain airbags that extend the entire length of the passenger compartment, dual forward airbags, and knee airbags for each forward position are also included free of charge with the Cruze Diesel, as are electronic traction control and stability control.  The OnStar telematics system, which is bundled with every GM product, can contact fire and rescue services automatically should a severe accident be detected, and it can also track a stolen vehicle.  It’s possible to order the Cruze Diesel with a blind-spot monitoring system, which also provides cross-traffic detection while reversing the car.

The 2014 Chevrolet Cruze Diesel comes with disc brakes both front and rear, an upgrade over the base Cruze that reflects the increased power offered by the model.  Side impact airbags for front and rear passengers, side curtain airbags that extend the entire length of the passenger compartment, dual forward airbags, and knee airbags for each forward position are also included free of charge with the Cruze Diesel, as are electronic traction control and stability control.  The OnStar telematics system, which is bundled with every GM product, can contact fire and rescue services automatically should a severe accident be detected, and it can also track a stolen vehicle.  It’s possible to order the Cruze Diesel with a blind-spot monitoring system, which also provides cross-traffic detection while reversing the car.

The 2014 Chevrolet Cruze Diesel’s 2.0-liter, turbocharged four-cylinder diesel engine is a fresh one for the Cruze lineup, and it generates a respectable 151 horsepower and 264 lb-ft of torque.  This output is harnessed by a six-speed automatic transmission (there is no manual gearbox available with the sedan), which has seen its internals massaged to better match the powerband of the turbodiesel mill.  The vehicle’s urea tank needs to be replenished once every 7,500 miles, which is roughly the same as the Cruze Diesel’s oil change interval.

The front-wheel drive Chevrolet Cruze Diesel returns fuel efficiency figures of 27-mpg in stop and go driving and 46-mpg on the highway, for a combined total of 33-mpg.  This compares quite favorably with the less-mighty 1.4-liter turbocharged gasoline engine found in the Cruze Eco, which matches the Diesel in combined driving, tops it by one mile per gallon around town, but falls behind to the tune of four miles per gallon during highway cruising.

The 2014 Chevrolet Cruze Diesel pours on the same charm that had me smiling behind the wheel of the gas version when I first drove the car a few short years ago.  The Cruze Diesel is consistently well-behaved over rough roads, it offers communicative, if not sporty, steering, and above all it feels very solid at a wide range of speeds.  There’s nothing about this car’s ride that would keep it from taking its place alongside the top picks in the compact sedan segment, even with the extra weight of a diesel mill sitting up front.

The new turbodiesel engine has found an excellent home in the Cruze platform, where it pulls the car effortlessly from a stop and keeps it moving forward when it’s time to pass.  The vehicle’s transmission works seamlessly with the low-revving four-cylinder, and torque is available with only the slightest turbo hesitation when stomping on the accelerator.  Although it does well around town, it seems clear that the Cruze Diesel’s long legs (thanks to an almost 700 mile cruising range) make it an even better road trip companion.

It’s not the same, tossable Cruze that I had come to know in RS trim, nor does it spin its engine freely in search of boost in the same way as the car’s 1.4-liter turbocharged gas unit.  Think of the Cruze Diesel as the most mature member of Chevrolet’s small car family – the little sedan that graduated from college, bought a three-piece suit, and works a steady 9-to-5 for a living.

The 2014 Chevrolet Cruze Diesel stands on its own as a frugal, if somewhat expensive, compact sedan.  Of course, it’s going to be compared again and again to the Volkswagen Jetta TDI, its closest turbodiesel rival but one that it trumps in terms of power and torque while giving up almost nothing in fuel efficiency or driving experience.  Prices are comparable when factoring in equipment level, too, and while the Jetta TDI does come with the added wrinkle of featuring both an available six-speed manual and its six-speed dual-clutch automated manual, after having experienced the latter’s somewhat balky behavior in sub-zero conditions I don’t think it’s necessarily an advantage when comparing these diesel sedans.  Taken on their respective merits, both of these cars offer a compelling argument to step away from the gas pump and embrace an alternative fuel lifestyle.  The Cruze Diesel just happens to do it with more power and technological pizzazz.

GM Canada supplied the vehicle for this review. 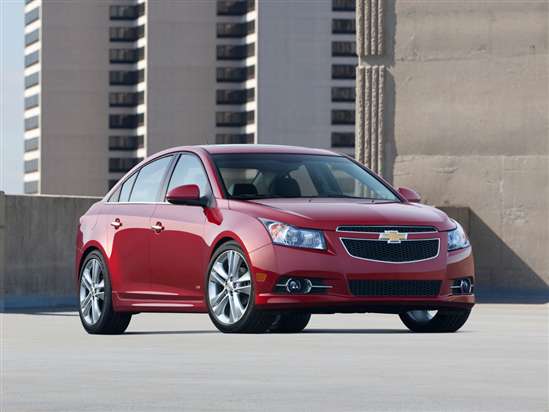