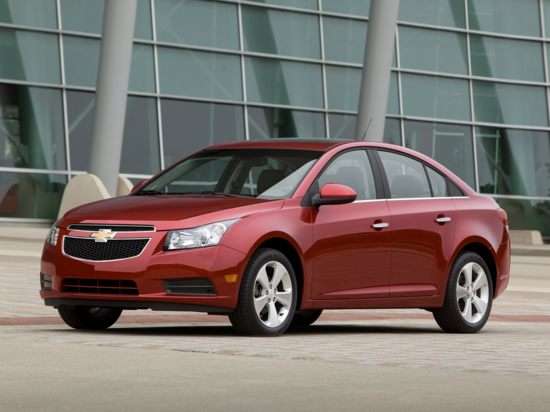 Changes for the 2013 Chevrolet Cruze:

Now in its third model year in this country, the 2013 Chevrolet Cruze welcomes some notable new infotainment and safety features for the current selling season, including a Chevy MyLink system that is standard on upper-level trims, as well as new driver-assistance measures like a rearview camera and Side Blind Zone and Rear Cross-Traffic Alerts. Two new color-touch audio choices also are on the menu, led by a premium system with a seven-inch touchscreen and integrated GPS navigation. Some important adjustments were made to the Cruze’s powertrains, too, allowing the car to meet enhanced emissions guidelines in California and other states. Finally, the 2013 Chevrolet Cruze will show off a trio of new exterior colors: Cyber Gray Metallic, Champagne Silver Metallic and Atlantis Blue Metallic.

The 2013 Chevrolet Cruze is available in four basic trim levels, beginning with the fairly well-equipped Cruze LS and its 1.8-liter, naturally aspirated 4-cylinder engine. The mid-range LT models—in both 1LT and 2LT configurations—then debut a 1.4-liter I4 turbo, along with increasingly premium style enhancers. The LTZ model delivers near-premium levels of comfort and design to cap off the Cruze’s “regular” lineup. But the Bowtie brand also offers the 2013 Chevrolet Cruze Eco that has been fine-tuned specifically for enhanced efficiency—and delivers with up to 42 mpg on the highway.

The standard 1.8-liter engine in the 2013 Chevrolet Cruze LS is a double overhead-cam unit with continuously variable valve timing, and it’s capable of releasing 138 hp and 125 lb.-ft. of torque. All other Cruze models, including the high-efficiency Cruze Eco, rely on a turbocharged 4-cylinder engine, also with CVVT technology, that makes 138 horses and 148 lb.-ft. of twist. All models except for the Cruze LTZ can be spec’ed with six-speed manual or automatic transmissions; the LTZ is an automatic-only affair.

According to the EPA, the 2013 Chevrolet Cruze’s standard powertrain—with 1.8-liter engine and six-speed DIY gearbox—can achieve efficiency ratings of 25 mpg city/36 mpg highway/29 mpg combined; with the same powerplant paired with an automatic, the Cruze is rated at 22/35/27. Then, the smaller yet more powerful turbo engine enables the Cruze to reach 26 mpg city/38 mpg highway/30 mpg combined regardless of transmission. The Eco model raises the bar to 26/39/31 with the autobox and 28/42/33 with the manual.

The 2013 Chevrolet Cruze is a five-star overall performer in the New Car Assessment Program of the National Highway Traffic Safety Administration (NHTSA), with the compact sedan posting five-star scores for frontal- and side-crash protection and a four-star grade in rollover scenarios. The Insurance Institute for Highway Safety (IIHS) also has named the 2013 Chevrolet Cruze to its roster of Top Safety Picks.

The Chevrolet MyLink system brings a suite of fresh technologies to the Cruze, including access to Apple’s “Siri” virtual assistant (for owners with compatible iPhones); Bluetooth for both audio streaming and hands-free calling; voice-recognition capability for phone, music and radio systems; and built-in interfaces for Pandora and Stitcher Smart Radio. From the safety department, the 2013 Chevrolet Cruze debuts a rear park-assist feature, a rearview camera, and both Side Blind Zone and Rear Cross Traffic Alert systems. In the Cruze Eco, drivers also enjoy efficiency-boosting technologies like active air shutters that optimize aerodynamics and engine cooling for improved fuel economy.