General Motors Proving Grounds, Milford, Michigan -- We have been here many times before. Usually, it’s to see static displays of new car and truck models set up under a big white tent, and go through the ‘dog and pony’ show of palming the flesh of executives, engineers, designers and marketing managers. They strut like proud mammas and papas after the birth of a new baby and scan your every eye blink to assess your level of interest, chart your enthusiasm or indifference, and predict your questions or haughty observations during the formal Q & A.

But this time it’s different. This time, there is a palpable excitement that zings through the outside air that is heavily laden with moisture and drizzle. Who could dare to not be electric at this moment, I think, as I look up at the storm clouds for hints of lightning. This nervous energy isn’t about seeing a true icon of America, skinned, with parts displayed like fine art under the Big Top -we’ve all seen it, in spy photos and auto shows, for what seems a long time. Many of those have been either leaked, or shared directly with the press.

I have that first-day-of-school-feeling as I descend the stairs of the bus and hit the tarmac, where I am surrounded by previous generation C5 Corvettes and, at last, a fleet of the new C6 models. Clean as a whistle, except for the beaded up rainwater, they are in Corvette colors that smirk at the weather. There are auto transmissions, 6-speed trannies and Z51 versions. I suddenly figure it out--it’s about driving 51 years of the past packaged for the present—it’s a car nearly symbolic of America and -- for a few hours of an afternoon -- politics, terrorism, and the price of fuel at the pump goes away. The sound of engines, the smell of rubber and the feel of power rule the land, even in the rain.

Chevrolet’s Corvette has been a defining character in the General Motors lineup since 1953. This fiberglass sports car has captivated enthusiasts worldwide, with sales of over a million models. So when designing a new version of Corvette, The General had to respond to the car’s heritage, in order to maintain this icon’s appeal. But nothing lasts that looks behind too longingly. The latest rendition, dubbed C6 because it’s the 6th generation model, thrusts mightily into the 21st century, with new styling in and out and with some of the latest techno-gizmos straight from the electronics’ parts bin. At the glance, it’s easy to see that the C6 is smaller than its C5 predecessor. Over five inches shorter and about an inch narrower, the newest Vette approaches Porsche 911 dimensions.

Despite the reduction in length, however, the wheelbase has grown an inch, thanks to shorter overhangs. It’s a tightly packaged machine communicating athleticism and performance potential, buzz words and concepts from today’s design language.

Perhaps the most notable styling characteristic in that language is the headlight configuration, which includes exposed lenses containing high-discharge Xenon bulbs. Corvettes have not had exposed lamps since 1962, but fixed headlights reduce complexity and weight while increasing effectiveness, according to GM. They’re also designed to signal a “lean, purposeful, performance oriented” look. It’s taken us a while to get used to them, especially since they look very Porsche-like. The taillights, however, are traditionally designed as four round lamps, a cue dating back to 1961. A bulged hood and more sharply defined front fenders are cues that suggest fat performance is available when you climb inside, as do the standard 18-in. front and 19-in. rear wheels. Out back four circular tailpipes exit through the center of the rear valance, another Corvette signature. So the look is good, and different. Getting in, however, is still a bit of work, somewhat like the plunge of dropping into a claw-foot bathtub in a low-slung room – but well worth the price of entry. Once there, you see that the inside is noticeably new. Soft-touch materials around the instrument cluster blend with aluminum trim plates and woven like surfaces to create an air of precision.

Flush mounted audio and climate controls also lend to this exacting execution. Additionally, the instrument cluster gauges have been improved to deliver better legibility and an optional DVD-based navigation system keeps you informed via a 6.5-in. touch screen. Another option, dual-mode head up display, projects vehicle speed and other information onto the windshield. Two modes – Street and Track – can be selected to accommodate various driving circumstances. On the road, Street mode projects data such as speed, turn signal operation, audio information, and high beam use. Track mode, the one that gives the thumbs-up to enthusiasts, shows a tachometer, speedometer, engine condition gauges, and even a lateral accelerometer. All of this instrumentation and projection attending to the powertrain indicate that the engine is something special. For 2005, an all-new 6-liter aluminum small-block V8 is wedged into the engine compartment. The LS2 mill delivers 400 horsepower and 400 lb.-ft. of torque, making it the most powerful standard small-block V8 engine ever fitted in a Vette. Features include flat top pistons, revised cylinder heads, 10.9:1 compression, a 90-mm throttle body, and a 6,500-rpm redline.

This year, a 6-speed manual Tremec transmission arrives as standard equipment. Gearing of this tranny is altered when Z51 performance option is checked, providing better acceleration in the lower gears and higher fuel economy in 5th gear. It also gets a transmission cooler to help the unit sustain high-intensity driving over long periods. Either Tremec has been revised to include shorter throws through a smaller shift lever. Computer Aided Gear Selection is meant to improve fuel efficiency.

The optional 4-speed automatic transmission has been strengthened to withstand the impressive 400 lb.-ft. of twist spooled by the engine. Both a five-pinion planetary gear set and a four-plate oil cooler have been added to increase performance and add protection. Performance Algorithm Shifting assists electronically, picking the proper gear for a given driving circumstance. Hard cornering, for example, is aided by a transmission that knows not to shift unnecessarily.

Four-wheel disc brakes with ABS are standard. Base rotor diameters are 12.8 in. up front and 12 in. out back. The Z51 package increases the fronts to 13.4 and the rears to 13. Active Handling stability control employs the ABS and traction control to create a web of safety. GM emphasizes, however, that these electronic assistants will not hamper spirited driving.

In the case that driving talent runs out, dual front airbags and optional side impact airbags in the seats maintain occupant integrity. Convertible C6s arrive standard with the side impact bags. Droptops also receive power tops with five layers of cloth, providing durability and better insulation.

Our long-awaited first drive of the new model was not without disappointment. As rain poured down and left deep puddles on GM’s newest test track, dubbed the ‘Lutz-ring’ (after GM V.P Bob Lutz and the famed Nurbring race track in Germany), we were relegated to the nearby roads surrounding the GM Proving Grounds. Fine for a Saturn VUE, even a Red Line version, but a travesty for a C6.

How did it handle? While it steers straight as an arrow, takes corners on point, powers like the wind, and sounds like a tornado brewing under full power, it was a bit squiggly in the puddles under hard throttle, just as it should be, with the back end choosing a separate course from the front on one occasion. Now, for a day with a dry track!

Corvette C6 raises the bar for performance among Vettes. The standard 400-hp engine nearly matches the output of previous high-performance Z06 models. Thanks to revised gearing, however, the C6 also achieves excellent fuel economy. That said, the Corvette defining the 21st century is one of exceptional flexibility and promise.

Will there be an automatic transmission? Chevy will offer an upgraded version of its 4-speed automatic from the previous generation Vette as a no-cost option.

What are its options? Currently, options include a power convertible top ($1995) and a DVD navigation system ($1400).

When was the first Corvette built and how many have sold? The General built 300 Corvettes in Flint, Michigan in 1953. Now, 51 years later, Corvettes there have become an American icon, with sales of over a million. A special racing version of the Corvette was the winner of this year’s 24-Hours of LeMans event in France.

How did it feel? It drives straight as an arrow, steers with ease and confidence, powers like the wind, and sounds like a tornado brewing under full power. 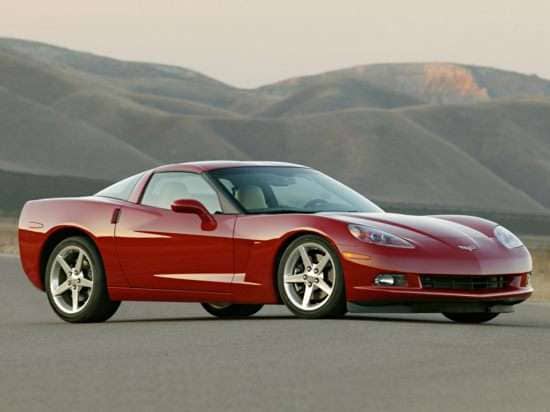