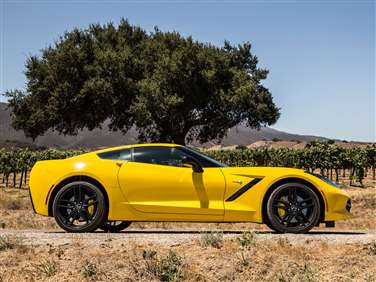 All About Chevrolet Corvette Stingray

The Sting Ray name (used both without and with the space) was introduced on the second generation Chevrolet Corvette, in 1963, and the name carried through the end of that model’s production run, in 1967. It was the first time the Corvette was available as a coupe, as the first generation of the Corvette was only built as a convertible. The Sting Ray was designed by Larry Shinoda, who also designed the Ford Mustang and the Mako Shark concept car. The Mako Shark was designed in 1961, specifically to guide development on future Chevy Corvette models. There are a lot of styling elements evident on the Mako Shark that helped guide the Corvette Sting Ray and are visible in the finished production car, even though the Mako Shark was a convertible and the Sting Ray had a fixed roof. Other inspiration for the Sting Ray came courtesy of the 1957 Q-Corvette project, which was initiated to help the Corvette evolve into a smaller, tighter, more technologically advanced model. The Q-Corvette project featured a rear transaxle, an independent rear suspension, disc brakes at all four corners, and more aggressive exterior design. Most of the car’s mass was shifted to the front, since the car’s nose was elongated and its tail was cropped. Peaked fenders hinted at the graceful shark and stingray comparisons yet to come. The 1957 Corvette SS race car project was also influential in helping shape the direction of the Sting Ray. This car was intended to be the flagship of Chevrolet’s official racing program, but shortly after the car’s premiere at the 12 Hours of Sebring, it was retired because the Automobile Manufacturers Association banned manufacturer involvement in racing. However, the Corvette SS was noted for its light weight and solid performance on the track. Rather than let the investment in the Corvette SS go to waste, a lot of its elements were adapted to the Corvette Sting Ray.

The finished 1963 Sting Ray was a light, nimble small block V8, available with 250, 300, or 340 horsepower, paired to a three-speed manual transmission, a four-speed manual, or a four-speed Powerglide automatic. For the 1965 model year, the standard drum brakes were swapped out for discs, reminiscent of the Q-Corvette. Halfway through 1965, a big block V8 engine became available and would be standard on the 1966 and 1967 models. The 1967 version of the engine was the most race-inspired production engine Chevy had offered to date, and the 1967 Sting Rays became especially desirable because they were the best example of the Sting Ray’s continued evolution through the second generation Corvette lifecycle, with the best combination of specs and features.

Though the name did not appear on the 1968 Corvette, the first year of the third generation, Stingray reappeared in 1969, although this time around, Chevrolet had changed it to one word and it remained that way until 1976. In 2009, the Corvette Stingray name enjoyed a brief return on a show car that debuted at the Chicago Auto Show to commemorate the car’s 50th anniversary. This show car merged classic Corvette cues with advanced technology. The seventh generation Corvette, beginning with the 2014 model year, resurrects the Stingray name and adorns each car with a small casting of a stingray, along with other Corvette badging.