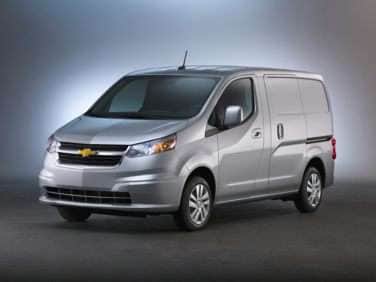 All About Chevrolet City Express

Chevrolet, the General Motors vehicle brand, has been established since 1911. This Detroit-based auto manufacturer focuses mainly on passenger vehicles, such as small, mid size, and full size cars, and many of its vehicles are designed and built in the United States. However, fleet vehicles are also important for Chevy's bottom line, and the 2015 City Express van was developed to take advantage of the recent evolution of the fleet van segment and throw some competition at Ford, which has the upper hand in the small commercial van market. To accomplish that, Chevy tapped into a partnership between General Motors and Nissan, which allowed Chevy to use the design, engineering and mechanicals from Nissan's NV200 small van to create the City Express. When Chevy's van comes to market, the visual similarities to the NV200 will be apparent, but Chevy has restyled the front and back ends to ensure the City Express fits in with the rest of Chevy's model lineup. The City Express will also carry Chevy badges.

The City Express is an all-new model for the Chevrolet brand, and is expected to go on sale in the fall of 2014. Its primary competition is the Ford Transit Connect, a small but tall van that offers a lot of cargo space despite a small footprint. To capture similar benefits, the City Express was designed on a car platform rather than a truck platform. This will help the City Express provide competitive fuel economy, good handling, and a tight turning radius for easier city driving. It won't be as large or provide as much capacity as most of the other vehicles available in the segment, coming in at 13 cubic feet less than the Ford Transit Connect. That is in part because, for the sake of garage parking, the City Express avoids the "tall wagon" profile that gives the Transit Connect its interior space as well as its distinctive look. However, Chevy is betting that the benefits will help the City Express find a niche, even though the Nissan NV200 was first to market. Other interior and utility features are also likely to mirror the Nissan version, which is equipped with plenty of storage in the cabin, a fold-flat passenger seat, a long load floor, sliding doors on both sides, and rear cargo doors that are split 40/60 so the left door doesn't stick too far into the street. The cargo space can be outfitted with a variety of optional modular storage packages from the factory. The LS is the base trim, and standard equipment is modest. Up front, the driver gets an infotainment system with a CD player and auxiliary input jack. Safety features include six airbags, electronic stability control, and a tire pressure monitoring system. Upgrading to the LT trim adds a rear camera and rear park assist, and a Technology package on the LT trim also adds a touchscreen display, voice recognition, navigation, satellite radio, and Bluetooth wireless integration.

Like the Nissan NV200, the Chevy City Express is powered by a 2-liter four-cylinder engine paired to a continuously variable transmission. This drivetrain yields a modest 131 horsepower, so accelerating with a full cargo load might be a challenge. For day-to-day driving, though, the City Express should achieve fuel economy of about 24 miles per gallon combined.