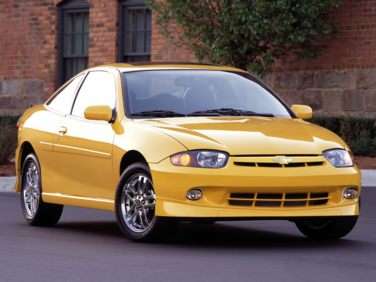 All About Chevrolet Cavalier

The Chevrolet Cavalier has a long history at General Motors. In 1981, Chevrolet needed a front-wheel drive compact car to help balance out their lineup of large sedans. The Cavalier would step into that role and fill it admirably, competing against the Honda Civic and a variety of offerings from Ford. Although the Cavalier was often the subject of poor reviews from the automotive press, specifically regarding its engineering shortcomings and poor quality, it was a runaway success for Chevrolet and one of the best-selling cars in North America. The Cavalier was dramatically re-designed midway through the 1990’s in order to address several previous faults, improving the overall platform and adding a new generation of buyers to the fold.

The 2005 Chevrolet Cavalier rides on that same improved chassis that turns 10 years old with this model year. Available as both a coupe and a four-door sedan, the Cavalier can be configured to fit the needs of most buyers at a very low and appealing price. Each version of the Cavalier is powered by a 2.2 liter Ecotec 4-cylinder engine, which generates 140 horsepower and 150 lb-ft of torque – more than enough to help the Cavalier keep up with the flow of traffic. The engine also provides excellent fuel economy, with up to 33 miles per gallon available in highway driving, making it competitive in its segment. A 5-speed manual transmission is recommended in order to get the best combination of power and efficiency out of the motor, but a 4-speed automatic is also an option.

In addition to the base model, the Cavalier can be ordered in LS and LS Sport trim. Air conditioning is standard on the compact, but that is the only frill that can be found in the vehicle’s spartan interior. Upgrading to the Cavalier LS adds power windows and locks as well as cruise control and anti-lock brakes, making it a much better choice at a price that is still affordable. The LS Sport swaps out the base model’s shocks and springs for a more competition inspired set and also upgrades the wheels to 16 inches. The sport suspension does improve cornering, particularly in terms of body roll and control over uneven road surfaces – two issues which leave some vehicles in this class scrambling to regain their stability.

When it comes to passenger space, the Cavalier does not fare poorly, with good leg room in the rear seat of both the coupe and sedan, and a fair amount of head room all around. The Cavalier is far from luxurious, but it is comfortable for short trips or medium-range drives between cities.

The 2005 Chevrolet Cavalier is vehicle which doesn’t impress with speed, power or comfort, but merely excels at being an inexpensive, reliable option for those who need a fuel-sipping car with more interior room than the typical subcompact. 2005 was the final model year for the Cavalier, and it was replaced by Chevrolet Cobalt, a vehicle with a similar appearance and range of options riding on a much more modern platform.