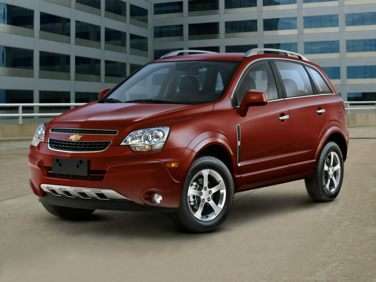 All About Chevrolet Captiva Sport

The General Motors vehicle brand Chevrolet was established in 1911. This Detroit-based auto manufacturer focuses mainly on passenger vehicles, such as small, mid size, and full size cars. Most Chevrolet vehicles, including Chevy SUVs, are designed and engineered in Michigan, in the United States, and are built in various production facilities around the world. However, General Motors has a global reach that includes many divisions around the world, and on occasion, Chevrolet will import international GM vehicles and sell them in the United States under the Chevy brand. The Chevy Captiva Sport is one example of this strategy. It’s a compact SUV that was introduced in Germany in 2006 as the Opel Antara. Opel had already shared the car with partners around the world, resulting in badging such as the Vauxhall Antara in the United Kingdom, the Holden Captiva 5 in Australia, the GMC Terrain in the Middle East, the Daewoo Winstorm MaXX in South Korea, and even the Saturn Vue in North America. A Mexico GM production facility supplies the vehicle to some Latin and South American countries with Captiva Sport badging. Though all of these vehicles are basically the same, there are differences among them based on the needs of each market. For example, some offer seating for seven passengers instead of five, and all have interior and exterior styling consistent with the particular brand.

The vehicle now known in the United States as the Chevy Captiva Sport was mainly imported to fill a void in Chevy’s fleet lineup. General Motors introduced the Captiva Sport in 2012, and it immediately bypassed Chevy dealerships and went straight to rental and commercial fleets. That's not to say that the Captiva Sport isn't suitable for mainstream buyers. On the contrary, the Captiva Sport is basically the same as the second generation of Saturn's Vue SUV, which was killed off when GM decided to shutter the Saturn brand as part of its overall consolidation and restructuring efforts. GM had other plans for the Captiva Sport, though. Demand for Chevy's popular Equinox crossover was so high that GM couldn't supply the vehicle for fleet orders without compromising a steady flow of the Equinox to dealerships. So, GM figured that bringing over the similar Captiva Sport could take off some of the edge, with minimal inconvenience. After all, the Captiva Sport was already being built, and it had already gone through the required National Highway Traffic Safety Administration testing.

The five-seat Chevy Captiva Sport was initially available in the United States in three trim levels, but the vehicle's options have since been streamlined. It comes standard with 17-inch aluminum wheels, power windows, power locks, remote keyless entry, climate control, and the StabiliTrak electronic stability and traction control system. The Captiva Sport is front-wheel-drive, and the all-wheel-drive option has been discontinued. Upgrades and optional features are available, such as a rearview camera, sunroof, leather upholstery, remote start, navigation, tire pressure monitoring system, and Bluetooth wireless integration. Initially available with several drivetrain options, as of the 2014 model year, just a 2.4-liter four-cylinder ECOTEC engine remains. It's paired to a six-speed automatic transmission and yields 180 horsepower.