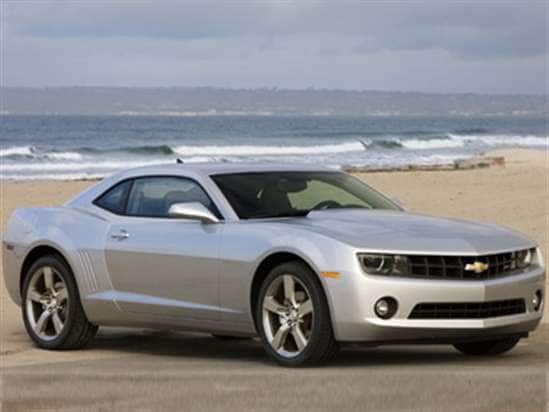 Changes for the 2013 Chevrolet Camaro:

The Bowtie Brand provides a hot new 1LE handling package for the 2013 Chevy Camaro SS, enabling the car to pull more than 1 g on the skidpad, and those super-sporty SS models also welcome a performance-oriented electric power-steering system and an available dual-mode exhaust. Other fresh features being offered across the 2013 Chevrolet Camaro lineup include:

Chevy’s modern-day muscle car is available in both coupe and convertible body styles, as well as in four trim grades that kick off with the 2013 Chevrolet Camaro LS. Right out of the starting gate, the Camaro LS features an up-level six-speaker sound system with 90-day complimentary satellite-radio trial, filtered air conditioning, front sport seats, Bluetooth technology, a multi-function steering wheel, and power windows and programmable door locks. The striking exterior of the 2013 Chevrolet Camaro LS is set off by a rear spoiler, composite halogen headlamps, power-adjustable body-color mirrors, body-color door handles and 18-inch wheels. Technically, the LS trim is further subdivided into 1LS and 2LS designations, with the key difference being that the former relies on a six-speed manual transmission while the latter is equipped with a standard six-speed automatic.

Similarly, the next step up the hierarchy here—the 2013 Chevrolet Camaro LT—also offers individual 1LT and 2LT packages. Each serves up a more premium cabin, with a Chevy MyLink infotainment system with seven-inch screen, as well as a leather-wrapped steering wheel and shift knob. Seating is enhanced as compared to the LS group, too: The 1LT features sport cloth seat trim, for example, and the front two places in the 2LT gain heat and leather seating surfaces. Additionally, the 2013 Chevy Camaro 2LT piles on nine premium audio speakers from Boston Acoustics, an auto-dimming rearview mirror, an auxiliary gauge package, a head-up display system, a standard rear-vision package (with rear-view camera system), and heated power-adjustable outside mirrors. Also standard with the 2013 Chevrolet Camaro LT models: Fog lights and their own distinct 19-inch wheel designs.

The 2013 Chevrolet Camaro 1SS and 2SS offer pretty much the same content found in the 1LT and 2LT, respectively, but SS drivers also get to enjoy Chevy’s 6.2-liter V-8 engine and massive 20-inch staggered-width wheels. Enthusiasts also can push the performance limits of the 2013 Chevrolet Camaro yet one step further, with the ZL1 model that’s been supercharged—and kitted out with Magnetic Ride Control and a Brembo braking system—for record Camaro performance.

Also providing high performance in safety testing from the National Highway Traffic Safety Administration (NHTSA), the 2013 Chevrolet Camaro garnered a 5-star overall grade for occupant protection—with 5 stars in evaluations of front, side and rollover crash safety. The Insurance Institute for Highway Safety (IIHS) has not yet tested the 2013 Chevrolet Camaro for its Top Safety Pick program.

Top technologies in the 2013 Chevrolet Camaro fall into three essential categories: Performance-oriented advantages, including Magnetic Ride Control, one of the quickest-reacting suspensions in the world, along with brake components from the experts at Brembo; safety measures, ranging from OnStar service to a rearview camera to Rear Park Assist; and infotainment benefits like navigation, Bose premium audio and Chevrolet MyLink technology, which allows owners to leverage select smartphones for hands-free calling, audio streaming and access to popular mobile apps.