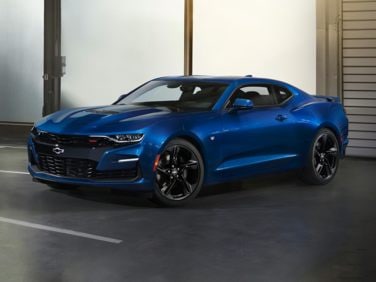 All About Chevrolet Camaro

The muscle car is alive and well in the 21st century. First the Ford Mustang was updated in well-received (to say the least) retro style in 2005, and then the Dodge Charger came back to life, with the Dodge Challenger soon to follow. Now it's General Motors' turn, as they announce the return of their pony car, the Chevy Camaro.

We last saw the Camaro in 2002, on its 35th anniversary, and now it's slated to roll onto dealer lots early next year as a 2010 model. It's always fun to peruse the 'net for spy shots and gather the little bits of information that leak out (even the ones that are officially announced are a pleasure) while a much-anticipated vehicle is in its concept stage, even if they're tenuous. But just hearing speculation on what the horsepower might be and seeing glitzy glimpses from the big auto shows can get a true gearhead drooling.

Since it's still in concept, the new Camaro remains a bit of a mystery. Somewhat of an early incarnation known by the character name Bumblebee has buzzed through the car-show circuit of late; this bright yellow car (a look-alike pair, actually) appeared in the 2007 feature film Transformers and had the scuffs and scars to show for it. Alas, this seeming sneak-preview was really a Pontiac GTO underneath a '77 Camaro shell, but nevertheless it looked fresh and it helped to rekindle a "Camaro lust" that had been dozing within many old fans.

Look for the 2010 incarnation to hold about 400 horses, as the concept version does, under that beautifully long and bulging hood. The power should be churned out by a Corvette-derived 6.0-liter, aluminum, small-block V8–although you can expect a V6 in the base trims. Word has it that GM plans this as an Active Fuel Management vehicle, so four of those cylinders will shut off when they're not needed. Although loyalty to a particular American car family tends to run deep, anyone who's remotely undecided in shopping for a muscle car a year or two from now just might be swayed by that efficiency factor, which should be further enhanced by a six-speed, manual transmission. Imagine that: rear-wheel drive and fuel-efficient appearing in the same sentence. Well, who's to say gas won't be in the $5-a-gallon range by then?

The new Camaro was designed and developed in Warren, Michigan, with the '69 model as the main inspiration, and the new generation (expect convertibles as well as coupes) will be assembled in Oshawa, Ontario. The classic Camaro appearance is a necessity, because it needs to be immediately recognizable as well as simply to fit the trend (see Exhibit A: Ford Mustang). The grille on the concept is prominent but contemporary. The fenders are flared, the look is low-slung, and the wheels are super-sized. Those huge wheels (21 inches in front and 22 in the rear) will be stopped by big four-wheel disc brakes, visible in those wheel wells. The car is certainly a looker, and you can bet it'll be a performer. That said, its look leans closer to no-nonsense–that is, it's not a Chevrolet Corvette and nor is it trying to be one.

Those good looks plus performance and relative affordability and practicality (hey, there is a backseat in there!) are the traits behind the Camaro's decades of popularity. The car seems to have attained just as much immortality in rock 'n' roll than its big brother the Corvette has. There's a band called Bang Camaro that's wildly popular in its native Boston. An act called the Kings of Leon had a song simply entitled "Camaro," while the Ramones did "Go Li'l Camaro." Camaro songs are generally fun, and the famous Dead Milkmen tune "Bitchin' Camaro," fits the bill.

Judging by the eager crowds who've milled around it at car shows, craning for a really good gander, we can expect the Camaro to remain popular with its old fans and to draw in some converts as well. GM will once again get its slice of the pony-car pie, and this may be just the beginning. Stay tuned, as there's always the possibility that the Pontiac Firebird will also rise like the phoenix.