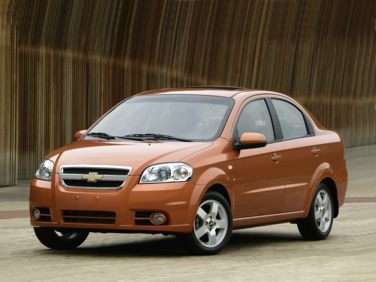 All About Chevrolet Aveo

The Chevrolet Aveo is a four-door, five-passenger subcompact sedan, and a five-door, five-passenger subcompact hatchback. The Chevrolet Aveo is a vehicle that is manufactured by the Korean automaker Daewoo, and then marketed by General Motors under a variety of different brands and names. Introduced as a 2003 model, the Aveo serves the North American market. This vehicle is a subcompact economy car that is priced low and targeted at first-time car buyers.

Now in its second generation, the Aveo is the smallest car sold by Chevrolet. It is also powered by one of its smallest engines. Underneath the hood lurks a 1.6 liter 4 cylinder motor which generates 103 horsepower and 107 lb-ft of torque, which isn’t spectacular, but which does a decent job of motivating the 2500 lb vehicle – especially when mated with the 5-speed manual transmission. A 4-speed automatic is also on offer, but it renders the driving experience far less pleasant, and it also lowers the gas mileage of the automobile. The Aveo is rated at a respectable 34 miles per gallon on the highway, and a slightly less attractive 24 miles per gallon for city driving.

In 2007, the Aveo was given a facelift and an interior redesign, although the basic platform remains the same as it did when the car debuted. The vehicle is available as either a 4 door sedan or a hatchback, and has a variety of trim levels to satisfy everyone from the most frugal buyers to those who are looking for something with a few more creature comforts. The base model starts around $10,000 and the top of the line LT model adds an mp3 player, 15 inch wheels, a sunroof and air conditioning, along with a number of other small luxuries. However, anti-lock brakes remain optional even on the LT, and are not available at all on the base model.

Further upgrades for the new generation of Aveo included a re-tuned suspension system that was made both tighter and stiffer in order to help the vehicle handle better. Understeer is still an issue with the vehicle, and since it is quite tall, the body leans deeply into tight corners. The exterior was streamlined to give it a more modern look that is much less clunky than the outgoing model. The front of the car bears the new Chevrolet corporate look, with a single bar crossing the grille horizontally, centered by the bowtie logo. The plunging, bulky aerodynamics of the front bumper are meant to suggest a European sport sedan or Japanese pocket rocket (such as the Nissan Sentra Spec V), but from the side the vehicle’s economy-based origins are revealed. The rear end of the Aveo is also done up to fit better within the overall Chevrolet lineup.

In terms of basic transportation, the Chevrolet Aveo fits the bill. While its performance and build quality may best be described as ‘adequate’, the low pricing is the main attractor for those who are shopping in this segment of the market. Entry-level vehicles are not known for their sparkling performance or excellent fit and finish. However, the Aveo is up against fairly stiff competition from both the Honda Fit and a few different models from Hyundai.

The 2009 Chevrolet Aveo is a carryover from 2008. The 2009 Aveo is sold in two body styles, the sedan and the Aveo5 hatchback. Each can be ordered in either LS, 1LT or 2LT trim. All versions of the Aveo make use of a 1.6 liter, 4-cylinder motor that generates 106 horsepower and 105 lb-ft of torque. A 5-speed manual transmission is standard equipment, but a 4-speed automatic can be ordered on the 1LT and 2LT. Fuel mileage is rated at 27 miles per gallon in stop and go driving, and 34 miles per gallon during highway cruising.