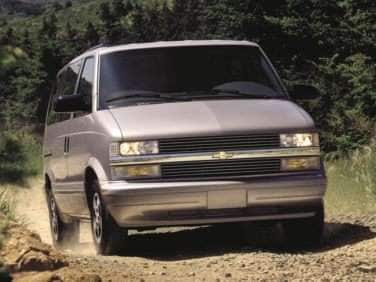 All About Chevrolet Astro

The Chevrolet Astro was the automaker's first minivan. Quickly brought to market in 1985 in order to combat the rival Dodge Caravan which had been introduced the year before, the Astro was always a step removed from other minivans of its era. The vehicle’s unique drivetrain and the fact that it could be ordered in panel configuration for use as a commercial vehicle gave it a utilitarian rather than family flavor. Chevrolet considered the van’s larger than normal dimensions to be a competitive advantage, and the Astro was often advertised as being more capable than its smaller competitors.

The 2005 Chevrolet Astro bears an improved chassis when compared to the first generation of the vehicle. The front suspension has been updated to replace the earlier Caprice-derived setup, but the van retains its strong frame and rear-wheel drive layout that sets it apart from the front-wheel drive market. As a result, the Astro’s towing capacity is an impressive 4,900 lbs, giving it truck-like utility when compared to the minivan offerings from other manufacturers. All-wheel drive is also available as an option.

Powering the Astro is a 4.3 liter V6 engine. Similar to the unit which can be found in the Chevrolet S10 pickup truck, the motor produces 190 horsepower and a hefty 250 lb-ft of torque. It is matched to a 4-speed automatic transmission. The engine in the Astro is partially located underneath the front of the passenger compartment, due to the stubby front end, and this can result in some noise and harshness for the driver – not to mention difficult servicing. The rest of the van’s interior offers spacious seating for 8, or in the case of the panel versions of the vehicle, a tall compartment which can be modified to house tools racks, equipment or even bunk beds and a kitchen for camping purposes.

Road manners are not as impressive as some of the other minivans on the market. The Astro suffers from handling that is reminiscent of a pickup truck crossed with a mid-80’s full-size sedan: solid, but difficult to coax around sharper corners. Comfort is also sacrificed by the Astro’s rugged construction, making it more suited for hauling cargo than people. The acceleration provided by the 4.3 liter V6 is not spectacular, but it does keep the van moving at a respectable pace, even when fully loaded down with a trailer.

The 2005 Chevrolet Astro is a compromise between the capabilities of a full-size van and the comfort and drivability expectations of minivan customers. Unfortunately, the vehicle is largely unsuccessful at being all things to all people, and instead reveals itself to be at best a smaller version of a commercial hauler. In recognition of this fact, and of the slow sales that had dogged the Astro van for years, General Motors discontinued production of the vehicle and its GMC Safari cousin at the end of 2005. There was no direct replacement for the Astro, as GM decided to shift its focus from minivans to crossover vehicles in an attempt to recapture market share in the people moving segment.