The Chevrolet Bolt EV introduced the world to affordable long-range electric vehicles when it debuted in 2017, hitting the market with more than 200 miles of range per charge for under $40,000, along with a spacious interior.

Since then, the Bolt has summoned a closely matched rival. And we don’t mean the Tesla Model 3, the best-selling electric car. That’s a sharp-driving, high-tech sedan with less cargo space, more complicated controls, and — in its base form — the same range as the Chevy. Instead, we mean the Hyundai Kona EV, the fully electric version of Hyundai’s subcompact crossover. It aligns closely with the Bolt on the spec sheet while delivering even more features for the money. (Both models, despite some SUV-like qualities, have only front-wheel drive.) If you want a practical, user-friendly electric car that’s capable of long drives without recharging, which one is the best? Read on as we discuss how the Bolt and Kona compare in eight ways, and which is the top choice overall.

First, Kona EV buyers are eligible for a $7,500 federal tax credit for electric vehicles. Each automaker is currently allocated a fixed number of tax credits, and by selling more plug-in vehicles than Hyundai, General Motors has already burned through its supply while Hyundai has not. That puts the Bolt at a powerful disadvantage. A second issue for the Bolt is that it has few standard safety features, compared with the generous list that’s included on the Kona EV. It’s also unavailable with Kona features like a power-adjustable driver’s seat, ventilated front seats, a sunroof, or adaptive cruise control. One Bolt perk is that a heated steering wheel is available even on the base model, a smart choice that lets you stay warm without the battery-draining heater. You may also be able to negotiate a big discount off the Bolt’s sticker price to offset the price difference. But for the most part, the Kona EV is the better deal.

The 2021 Bolt EV travels an EPA-estimated 259 miles per charge, squeaking past the Kona EV’s 258-mile range. However, the Kona EV’s efficiency is rated for the equivalent of 120 miles per gallon, edging out the Bolt EV’s 118 MPGe. They have equivalent charging times, too: about 4 miles of range per hour on a 120-volt household outlet, a full charge in 10 hours on a 240-volt car charger, and 30-minute boosts of about 100 miles from a fast-charging public station. That means you can commute with no concerns and still manage a road trip in a pinch.

We tested the Kona EV during mild weather and the Bolt EV during a cold snap. Our Bolt told us we lost 7 miles of range due to chilly batteries and another 24 miles from using the heater. We also saw slower 120-volt charging. Still, the Bolt’s computer said we were on track for 210 miles at a rate of 3.1 miles per kWh. Our Kona EV, in near-ideal temperatures, was on track for a mighty 285 miles of range at 4.7 miles per kWh. Since we can’t fairly compare these figures, we’ll call this category a tie based on the official specs.

The Bolt also has a tiny front end; since it will never need to fit a gasoline engine under the hood, it gives more of its length to the cabin. By contrast, the Kona EV shares its body with the gas-powered Kona, so it has a more conventional long hood and separate body. Yet in other ways, it’s the Bolt that looks more like a regular car. For example, Hyundai removes the Kona EV’s grille (since there’s no engine under the hood that needs a cooling airflow) and gives it an unusual wheel design. Chevrolet gives the Bolt the impression of a front grille, and its wheels could belong to any car. Neither EV looks like it would cost $40,000, and we won’t pick a stylistic winner between these two approaches.

Some electric cars feel like a vision of the future, with advanced (and sometimes intimidating) technology and high-end designs. Others feel more like ordinary economy cars — and that’s generally where the Bolt EV and Kona EV fall.

The Kona EV shares much of its interior with the gas-powered Kona. The EV has its own exclusive gauge cluster and replaces a conventional shifter with a push-button gear selector, and it carves out a storage area below a floating center console. It also offers an optional 10.3-inch infotainment screen that’s not yet available on the gas Kona (base EVs have 7-inch screens). Everything works well, but the interior fails to feel special with an ordinary design and many low-end materials. The Bolt EV isn’t any fancier, also filled with basic plastics, but it’s less generic than the Kona. Chevy uses some unique interior materials like geometrically textured white trim, along with an all-digital gauge cluster. Its infotainment touchscreen can be slow to respond, but it’s a generous 10.2 inches even on the base model.

Although it’s the Hyundai Kona EV that calls itself an SUV, the Chevrolet Bolt EV has the more SUV-like seating position. You’re higher off the floor, you have a bigger glass area around you, and you have a more open, airy cabin feel. However, for a couple of reasons, we’re going to give this category to the Hyundai.

First of all, the Chevrolet’s front seats aren’t all that comfortable. They’re hard, flat, and narrow, while the Kona’s provide more support. Secondly, the Bolt’s height-adjustable driver seat stops at an awkwardly high position for some drivers; if you’re tall, your eye level rises past the big windshield and makes you hunch forward to see the stoplight in front of you. Thirdly, the Kona EV provides a wider range of comfort features, including a power-adjustable driver’s seat and ventilated front seats.

While the Kona EV has comfortable front seats, the rest of the cabin is measurably smaller than the Bolt’s. The Chevrolet’s rear seat is more supportive and provides more legroom; you won’t stretch out relaxedly in the back of a Bolt, but even tall folks will fit without jamming their knees into the seatbacks. (They won’t enjoy an excess of headroom, though; blame the extra-high seats again.)

For cargo, the Kona EV is back in the lead behind the rear seat, providing 19.2 cubic feet of space compared with the Bolt EV’s 16.9 cubic feet. But the Chevy wins decisively when you fold the seat down. It’s not a long car, but it’s tall, meaning it’ll fit bulky items well. Total cargo volume measures 56.6 cubic feet to the Hyundai’s 45.8 cubic feet. The Bolt also has a handy height-adjustable cargo floor, and its rear seat folds more easily than the Kona’s.

A big advantage of a small electric car over a small gasoline-powered car is its performance. That’s because electric motors provide peak torque right off the line, and they’re nearly silent even when they’re working hard. That’s a strong contrast from the groans of protest you’ll get if you rev many small cars’ gas engines to the limits. What’s more, both the Kona EV and Bolt EV are especially quick — not Tesla-like, but more like a sports car than an economy car.

They’re good to drive in other ways, too. They have firm, responsive steering and nicely composed suspensions, making them feel expensive in a way that their interior designs do not. If you do actually push these EVs hard, both cars’ steering racks are inclined to go numb and stop telling you what the wheels are doing, but they feel upscale and fun to drive the rest of the time. Hyundai gets a narrow win thanks to its quieter highway ride, as the Bolt suffers from extra wind and road noise at high speeds.

The 2021 Hyundai Kona EV comes standard with advanced safety features that include automatic emergency braking, lane-keeping steering assistance, and blind-spot monitoring with a rear cross-traffic alert. You need the top trim level (Ultimate) for adaptive cruise control and a more sophisticated automatic emergency braking system that includes pedestrian-detection capabilities. However, the 2021 Chevrolet Bolt EV doesn’t have any of these systems as standard; all cost extra, except for adaptive cruise control, which isn’t available at all. At least they’re optional on both the base LT and top-level Premier models, rather than restricted to a top trim level like on some Chevrolets.

The gas-powered Kona also edges out the Bolt’s crash-test performance, earning top scores from both the Insurance Institute for Highway Safety and the National Highway Traffic Safety Administration. (Neither has specifically tested the electric Kona.) The Bolt did well too, but it slipped to a slightly lower rating than the Kona in a couple of crash tests.

Even though the 2021 Chevrolet Bolt EV is an older design than the Hyundai Kona EV, it puts up a strong showing. It’s still roomy and quick, it’s still efficient, and it still has a longer range than most of its non-Tesla competitors. Perhaps even more impressive, its driving experience feels more upscale than you’d expect from its interior and exterior design; this isn’t an EV that only looks good on paper.

Still, the 2021 Hyundai Kona EV is our winner. While it has less space, it’s more comfortable for the driver, it’s quieter, and it has a longer list of features. Even more significantly, buying one will get you a $7,500 federal tax credit that the Bolt can no longer offer. We have seen dealerships offering massive discounts on Bolts, so we’d still encourage you to give it a look, too — especially if you like a higher seating position and value a roomier cabin. But overall, the Kona EV is our top pick if you’re looking for an easy-to-use, high-range electric vehicle for less money than you’d pay for a Tesla. 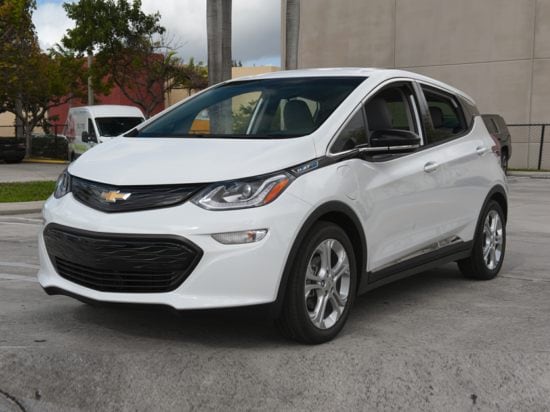