For years, America’s favorite full-size SUV had the smallest interior. That was the Chevrolet Tahoe, which offered big-car flavor, plenty of towing capacity, and two comfortable rows of seats — but which barely wedged in an uncomfortable third row, and left little cargo space with it in use. The most family-friendly competitor was the roomier Ford Expedition, which broadened its appeal beyond mere interior space during a 2018 redesign. It easily became the class leader.

But now the Tahoe has been redesigned, too. Due to a growth spurt and a more sophisticated suspension design, it has become even roomier than the Expedition. Does that mean the Ford has been outclassed, or does it have other strengths to retain its place as a class leader? Here’s what we learned from testing a 2021 Chevrolet Tahoe and 2021 Ford Expedition.

The 2021 Ford Expedition starts at $50,595 for the newly introduced XL STX trim level, compared with $49,600 for the base 2021 Chevrolet Tahoe LS. And the difference is even bigger than it looks at a glance. Most notably, the Expedition XL STX strips out its third-row seat, which reappears on the $53,410 XLT model.

Moving up the trim ladder, leather upholstery arrives on the $54,300 Tahoe LT and the $62,175 Expedition Limited, while even non-heated leatherette starts at $54,895 on the Ford. Both SUVs are available with nearly every imaginable luxury, but the Chevrolet tends to be the better bargain. We’d encourage you to get price quotes from local dealers, though, in case you’ll find the older Expedition for a much bigger discount than the freshly redesigned Tahoe.

There are only so many ways to style a big box, but Ford and Chevrolet have chosen two different ones. The Expedition is rounded off at the edges for a gentler approach to massive size, while the Tahoe is in your face, especially on our tested off-road-focused Z71 model.

Where the Ford’s headlights and taillights are big rectangles with rounded corners, the Chevy has pinched headlights that curve back and forth from the grille. While the Tahoe’s aggressive front end is straight up and down, the Expedition’s leans back. And while the Tahoe’s front end is dominated by a massive chrome bar across its grille — except on the blacked-out Z71 and RST models — the Expedition’s grille is smaller and less imposing. The winner will depend on whether you favor handsomely conservative or boldly new. You can also consider the 2021 GMC Yukon, which puts a more angular front end and even more chrome on the same Tahoe body.

The redesigned Tahoe has a modern and high-tech interior, with a 10.2-inch touchscreen and clean, straight lines. And the big infotainment screen, included as standard equipment on all models, is responsive and nicely laid out. Other controls are easy to use, too. Overall, the Tahoe’s interior design is contemporary without being overwhelmingly cutting-edge, perfect if you like an SUV interior with truck-inspired cues. Some critics have wished for high-quality plastics given the Tahoe’s $50,000 starting price, but while there are definitely some low-rent bits, we weren’t bothered by the overall ambiance.

Meanwhile, the Expedition’s dashboard doesn’t merely pay homage to a truck. It’s essentially straight out of the F-150 pickup — and not even the current-generation F-150 at that. While the Ford’s 8-inch touchscreen would be a decent size in a sedan, it gets a little lost in the Expedition’s wide dash. And the overall design is more utilitarian than posh, even if the materials are generally high-quality. An upgraded Expedition interior with a more modern design and a bigger touchscreen is expected for the 2022 model year, but the Tahoe wins for now.

Ford has been winning the interior space battle for nearly 20 years, ever since the 2003 Expedition switched to a space-saving independent rear suspension. But for 2021, the Tahoe ditched its old solid rear axle in favor of the same suspension type; it also grew several inches longer. The result is that the Chevrolet can finally match the Ford for passenger space in this segment and now offers even more room for cargo.

The Tahoe has firm, supportive front seats. The Expedition’s are cushier and more welcoming, yet they also retain their support over time. Both SUVs have a choice of bench seats or captain’s chairs in the second row, and three passenger bench seats make up their third rows. Even adults will be comfortable in both vehicles’ third-row seats, which is a big change from past Tahoes. The Expedition has bigger third-row windows for a better view out, while the Tahoe’s second-row seats pivot out of the way better for easier third-row access.

Ford has invested heavily in its EcoBoost line of turbocharged engines, and the Expedition uses the company’s best-selling unit: a 3.5-liter V6 it shares with the F-150 pickup truck. It makes 375 horsepower and 470 lb-ft of torque on most trim levels, including our test vehicle, and 400 hp and 480 lb-ft on the top Platinum. It provides vigorous acceleration, a rich but not overpowering engine note, and crossover-rivaling EPA ratings: up to 17 mpg in the city and 23 mpg on the highway.

Most Tahoes, including our test vehicle, have a 5.3-liter V8 engine with 355 horsepower and 383 lb-ft of torque; the top High Country model is also offered with a 6.2-liter V8 making 420 hp and 460 lb-ft of torque. But no Tahoe has more torque than the six-cylinder Ford, and the 6.2-liter’s EPA ratings max out at 15 mpg city and 20 mpg highway on premium fuel. The 5.3-liter uses regular, but its 16 mpg city/20 mpg highway still trails the Expedition. Chevrolet does offer a six-cylinder turbodiesel with 270 hp and 460 lb-ft of torque, and it manages an outstanding 21 mpg city/27 mpg highway, but the Expedition otherwise wins easily here.

Even though the Tahoe is newer than the Expedition, we didn’t feel an advantage in its ride and handling. Both giant SUVs handle with commendable composure for their bulk, even if you don’t choose their selectable “sport” driving modes. Firm, responsive steering is more confidence-inspiring than the looseness that once plagued big truck-based SUVs. They can still feel intimidating if you’re used to smaller vehicles, but the learning curve has gotten much less steep.

At the same time, neither vehicle has the extra-cushy ride some folks might expect from a big luxury vehicle. If you’re expecting a pickup truck, you’ll be pleasantly surprised. If you’re expecting a Mercedes-Benz or even a Honda, you’ll find them bumpy. You can ease that feeling a bit by choosing smaller wheels and avoiding the off-road-tuned suspensions, but neither SUV is an isolation chamber. With similar experiences between the two vehicles, we’ll call this category a tie.

The redesigned 2021 Chevrolet Tahoe earned a middling four-star overall safety rating from the National Highway Traffic Safety Administration, losing points for less-than-perfect frontal-impact protection. Fortunately, the Tahoe is full of technology to help keep you from needing that type of protection. A forward-collision warning with automatic emergency braking and pedestrian-detection capability is now standard equipment on all models, and you can also upgrade even the base model with blind-spot monitoring with a rear cross-traffic alert, and a lane-departure warning with lane-keep assist.

The 2021 Ford Expedition has all of the above as standard equipment, along with a top five-star NHTSA crash score. That earns it the win for us. The Tahoe does provide many optional safety features for less money than the Ford, and it also has some options that the Expedition doesn’t offer: a rear view camera mirror for improved visibility and a vibrating Safety Alert Seat. And many GM owners swear by the OnStar collision-alert system. But we find the crash-test scores more significant.

It’s never good news for a class leader when a top competitor gets a full redesign. Sure enough, the 2021 Ford Expedition slips behind its roomier and less expensive rival. The 2021 Chevrolet Tahoe make impressive strides forward, and it does so without inflating its price tags.

There’s still a lot to like about the Expedition. Its engine remains a gem — powerful, capable, and fuel-efficient. It scored better in crash tests. We prefer its seats. Some customers are bound to prefer its styling. And you might find a bigger discount on the Ford, offsetting the Tahoe’s price advantage. Still, for its well-rounded excellence and superior value for the money, it’s now Chevy that makes the best full-size SUV in town. 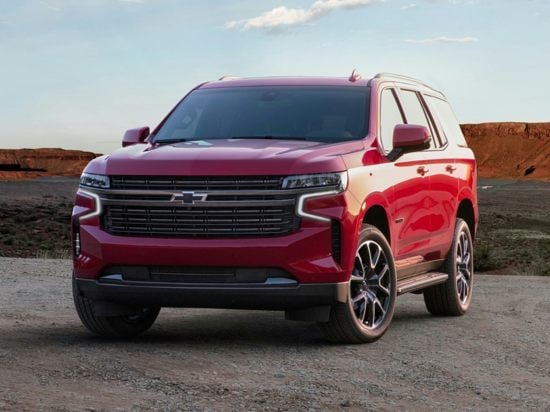