Towing With the 2020 Ford Explorer 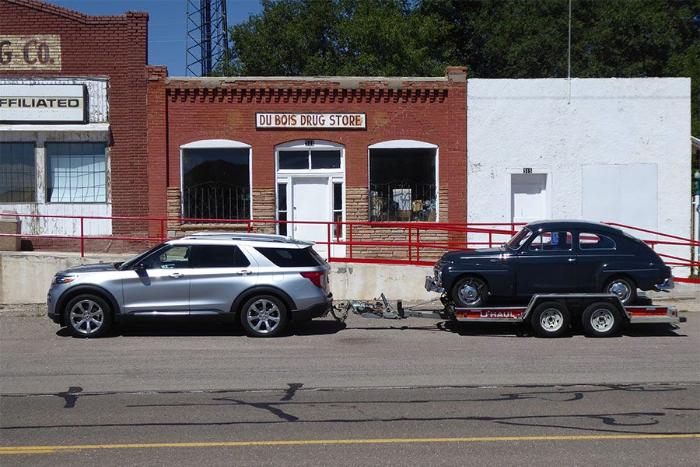 My first opportunity to get behind the wheel of Ford’s all-new 2020 Explorer coincided with a need to transport a vintage 1960 Volvo from my old domicile near Detroit to new digs in Tucson, Arizona. As an auto journalist, it’s commonplace to spend a few hours and drive a hundred miles or so at a vehicle introduction. But it's rare to get several days and a couple thousand miles of cross-country stick time in a new vehicle pulling a trailer and collector car nearly equaling the weight of the towing vehicle.

The 2020 Ford Explorer introduces an all-new rear-drive-based platform with more power, more standard technology and safety features, and, most applicable here, increased towing capacity. You can read about all of the 2020 Explorer’s new features in previously published Autobytel articles here and here. 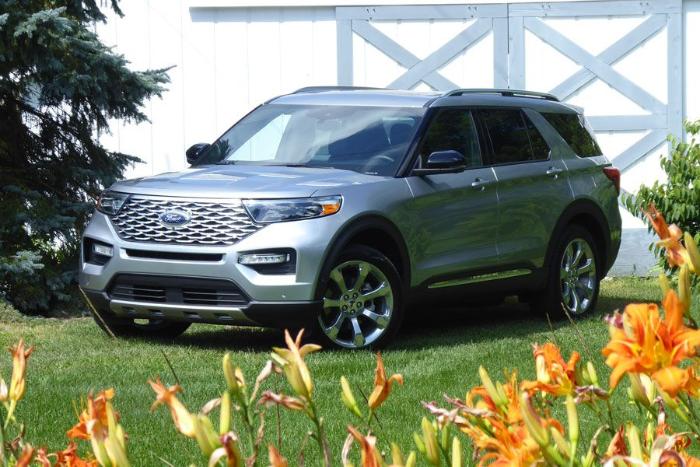 What to Drive?
Ford’s first-ever Explorer Hybrid and the high-performance ST model weren’t available for the trek, but a 2.3-liter EcoBoost four-cylinder-powered Explorer Limited was. It makes a healthy 300 horsepower and 310 lb-ft of torque. And the EcoBoost four-cylinder’s EPA estimates of 21 mpg city/28 mpg highway weren’t that far off the F-150 3.0-liter PowerStroke V6 diesel’s 22 mpg city/30 mpg highway ratings (another vehicle I considered for the cross-country towing trek). Further, the 2.3-liter EcoBoost-powered Explorer can tow up to 5,300 lbs, well above the combined weight of the 2,100-lb Volvo PV544 and 2,200-lb U-Haul car trailer.

Also available was a top-of-the-line Explorer Platinum equipped with Ford’s 3.0-liter EcoBoost V6, pumping 365 hp and 380 lb-ft of torque, which made an even more compelling case to be the best towing vehicle for the job. Its 5,600-lb max tow rating added an extra margin of capability, and the Platinum’s standard intelligent four-wheel drive added some peace of mind for weathering the intense summer thunderstorms common in the desert Southwest. The 18 mpg city/24 mpg highway EPA estimates weren’t that far below the 2.3-liter EcoBoost four-cylinder’s, and just the thought of the extra margin of six cylinders instead of four was reassuring. Also, common sense suggested that six cylinders wouldn’t have to work quite as hard as four and maybe stay out of turbocharged boost more of the time, thus saving fuel. 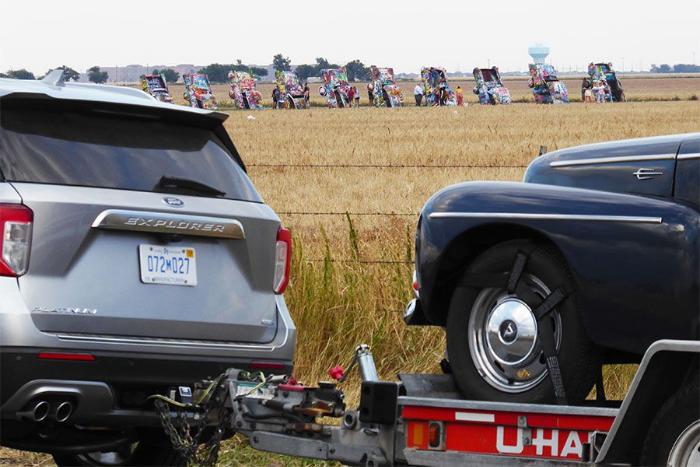 Hooking Up
After getting familiar with the all-new 2020 Ford Explorer on Michigan’s back roads, it was time to hook up a trailer and start the towing exercise. Unlike Ford’s larger Expedition SUV and F-Series pickups, there is no Pro Trailer Assist option in the Explorer to help drivers align the hitch ball with the trailer. But the Explorer’s new 10.1-inch infotainment touchscreen display and customizable backup camera angles (including a new 360-degree overhead view) helped with trailer hookup immensely. It was like having a second set of eyes back there. Also convenient were both four-pin and seven-pin electrical connectors alongside the Explorer’s built-in Class III hitch receiver for trailer lights and turn signals. 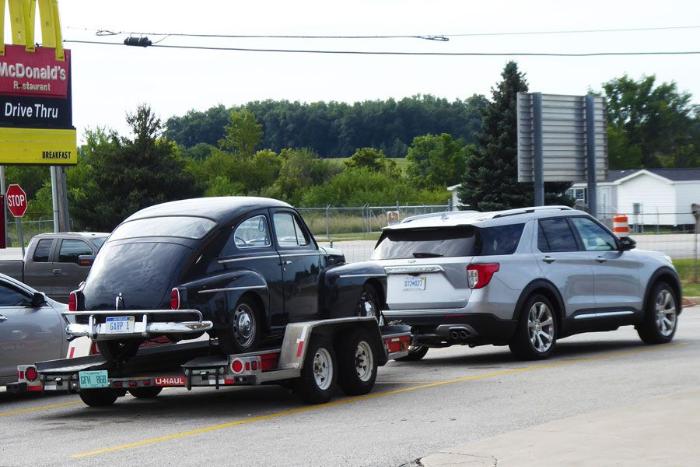 The Ride
I was surprised and impressed by how little the 4,300 lbs of towing weight impacted the performance and dynamics of the 4,700-lb Explorer Platinum.

For starters, the twin-turbo 3.0-liter EcoBoost V6 was a model of smoothness, flexibility, and responsiveness. Regardless of engine speed, there was an abundance of torque available, even at part-throttle, with absolutely no turbo lag at low speeds and great pulling power for merging onto freeway speeds and climbing grades. The 10-speed automatic swapped cogs with surgical precision and always landed in the right gear for the driving situation at hand.

The Explorer Platinum’s standard adaptive cruise control helped make 300-mile legs between fillups less tedious, and speed sign recognition gave a helpful heads-up for reduced limits (and potential speed traps) in construction zones and local municipalities. Through the undulating hills of Missouri and Oklahoma, tow/haul mode (one of seven drive modes selectable via a console switch) helped the adaptive cruise control avoid dropping below and then overshooting the set speed as it worked to maintain a preset following distance to the vehicle ahead.

Also seemingly unaffected by the trailered load was the Explorer’s nicely weighted, friction-free, and pleasantly linear steering. Despite sometimes gusty crosswinds in Oklahoma, the Explorer and trailered treasure didn’t get blown around much, no doubt aided by the vehicle’s side-wind stabilization system.

Another new tech feature is standard blind-spot monitoring that can be configured to also advise the driver of vehicles approaching from the rear quarters of the trailered load. When a trailer is hooked up, the vehicle monitor will display a message asking the driver if the trailer is of a certain width and length. If the trailer does not exceed those parameters, the blind-spot system will extend to cover the trailer as well as the vehicle. Pretty cool. 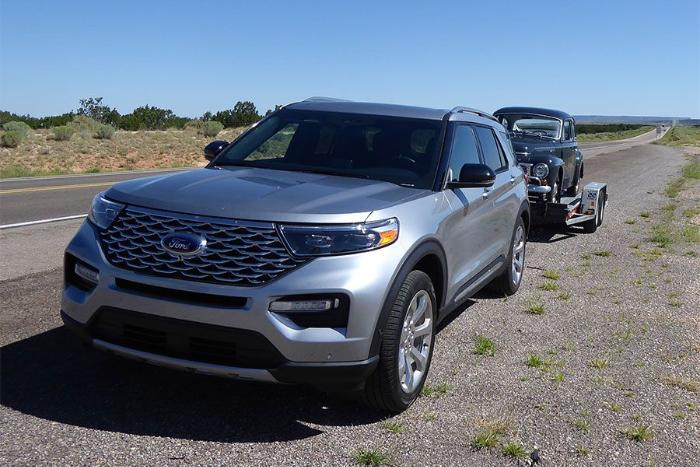 Towing Fuel Economy
I was able to run all 2,000 miles using the recommended regular unleaded gasoline. Premium unleaded would have no doubt added a few horsepower, but frankly, the tiny performance boost would not have been worth the considerably higher fuel costs. And the EcoBoost V6 didn’t need the higher octane fuel, despite temperatures well north of 100 degrees in Missouri, Oklahoma, Texas, and Arizona, and elevation topping 6,000 feet in New Mexico.

The 2020 Ford Explorer EcoBoost V6 returned an average of 15.6 mpg over three days and the 2,000 miles of mostly interstate and rural two-lane highways. That exceeded my expectations by a long shot.