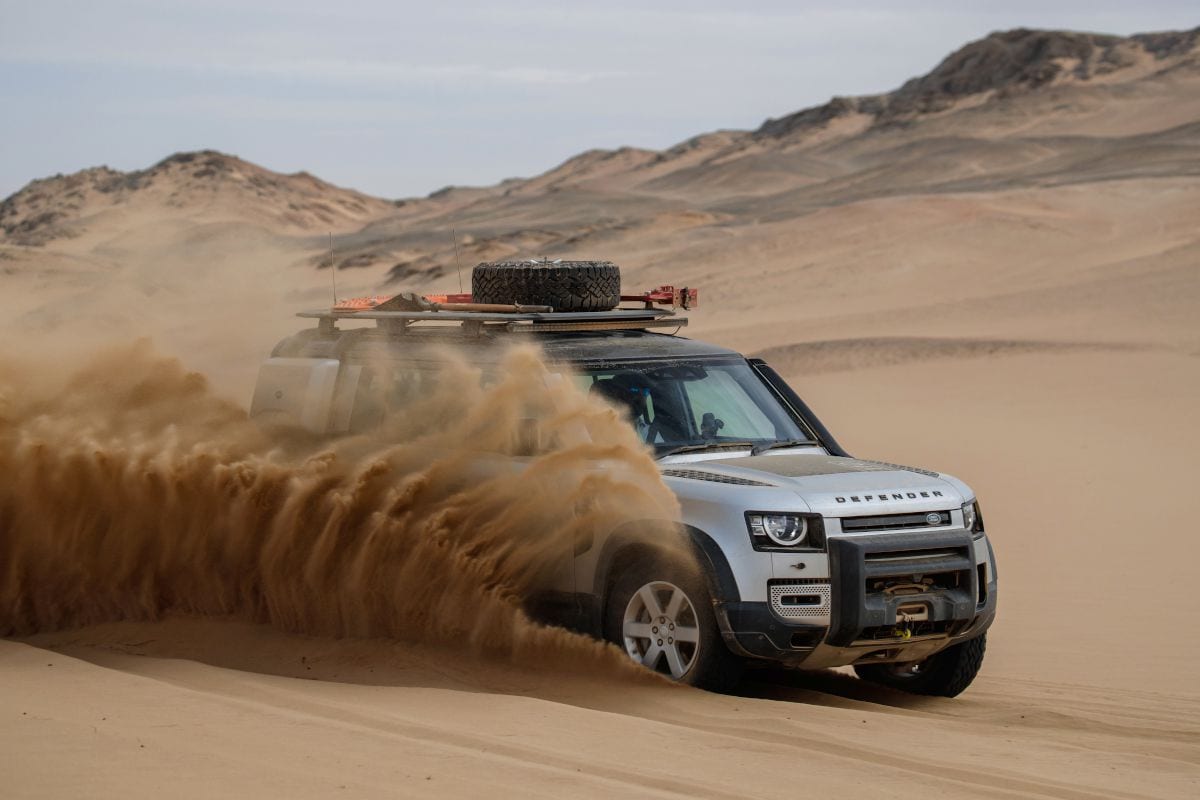 After more than 20 years, the Land Rover Defender makes its debut at the 2019 Los Angeles Autoshow Photo by Land Rover 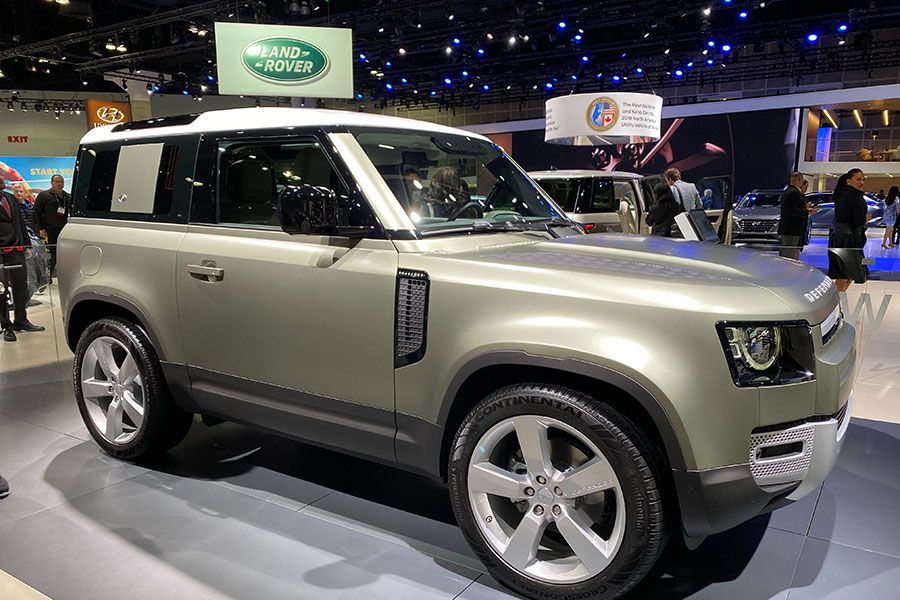 As one of the most anticipated vehicles of 2020, the Land Rover Defender made its first public appearance in the United States at the 2019 Los Angeles Auto Show. This all-new iteration of the classic nameplate should not be mistaken for some genteel high-class crossover that fills up parking lots at Whole Foods; the Defender is a serious and extremely capable off-roading SUV.

This new generation revives the Defender name that hasn’t been on sale in the United States since 1997. The Defender had always been the archetypal Land Rover, the sort of vehicle the British Army would drive over the North African deserts or through the jungles of Belize. The 2020 Defender brings this formidable reputation into the 21st century, but without the agricultural demeanor.

Instead of the traditional body-on-frame construction, the new Defender has a super-rigid one-piece body. Its aluminum-intensive platform is shared with the Range Rover, and an adaptive air suspension will be on the options list. So it can be genteel when necessary. 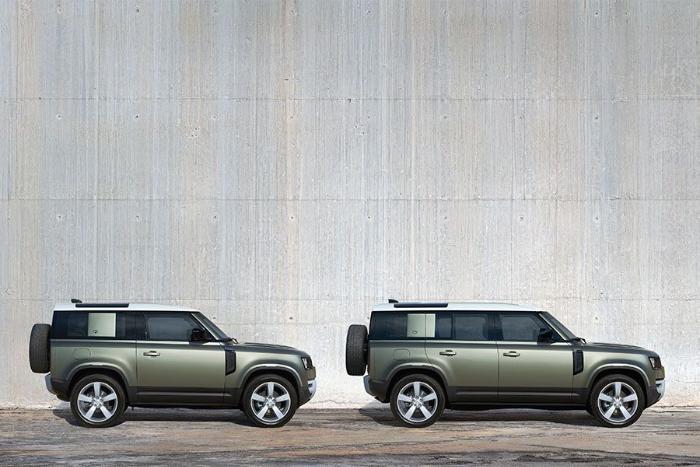 90 or 110?
We say new Defender in the singular, but there are two variants: 90 and 110. These numbers relate to the wheelbase length and refer to the classic Defender variants. In reality, the 90’s wheelbase (the distance between the front and rear axles) measures 101.9 inches. The 110 comes with a 119-inch equivalent. This longer model, with four passenger doors instead of the 90’s two, brings the chance to add a third seating row for a total of seven occupants.

Both versions come with “the square” -- otherwise known as a thick, block-like C-pillar. It’s a styling touch with no structural importance, but will enhance the outward vision of those sitting in the back. And both models have off-road-friendly short overhangs, plenty of ground clearance (11.5 inches, with a wading depth of 35.4 inches), plus generous headroom for all. The full cargo space specifications have yet to be released, but the 110 has 38 cubic feet of luggage space behind the last row. 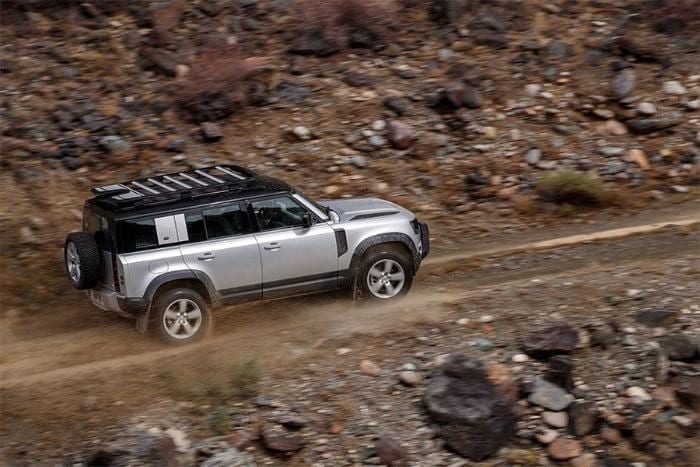 P300 or P400?
These figures refer to the engine choices. The bottom two trims -- base and S -- have a 296-hp 4-cylinder unit (rounding that figure up gives us the 300). It’s turbocharged and has a 2.0-liter displacement. Torque (the amount of thrust) is often more important than outright power, especially off-road, and the P300 engine should generate something in the region of 295 lb-ft.

The SE, HSE, First Edition (more on this in a moment) and X trims have the P400 drivetrain which is a mild hybrid, with an electric supercharger, plus an electric motor running a 48-volt setup for various functions. The combustion engine is a 3.0-liter V6; output is 395 hp and 406 lb-ft of torque.

Thanks to the muscle of each drivetrain along with the strong body, towing capacity is an impressive 8,201 pounds. An 8-speed automatic transmission is standard, as is an all-wheel drive system with 2-speed transfer box. A Terrain Response System, to make driving easier off-road and/or through rough weather, is also available. 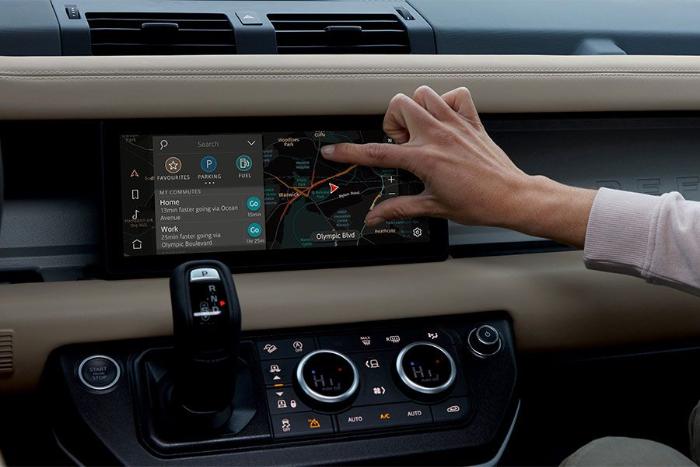 Apple CarPlay or Android Auto?
Even though the new Defender can trace its roots back to the original Land Rover whose design was drawn in the sand, it’s still coming into the world as a 2020 model. Meaning it has plenty of technology as both standard and optional, such as smartphone integration, a 10-inch touchscreen, wi-fi, Bluetooth, digital instrumentation, “3D” navigation, a head-up display, forward-facing camera, and over-the-air software updates. 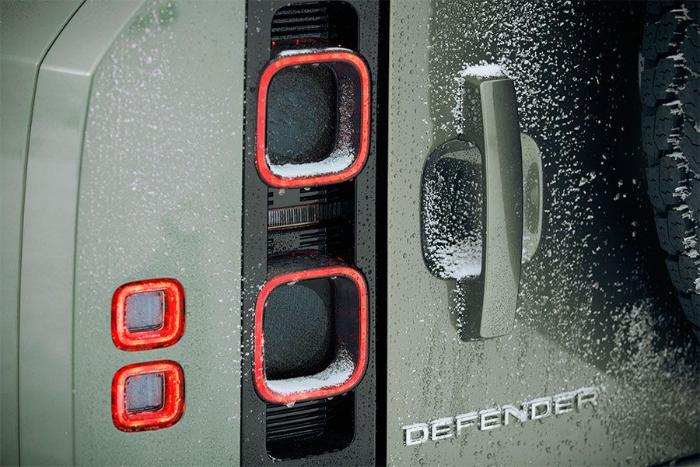 Urban or Country?
These are just two option bundles available. There’s also an Adventure pack and an Explorer pack. Land Rover’s Activity Key is another extra. It’s a shockproof and waterproof gadget worn on the wrist that takes the place of the conventional key for when the driver goes surfing, kayaking or something similar.

Audiophiles may choose between a standard 6-speaker audio setup or an array of Meridian systems from 180 to 700 watts.

Once the whole range comes on stream, the starting price will be $50,925. At the other end of the pricing spectrum, the X versions start at $81,925.

Like other Land Rover vehicles, the new Defender is squarely in the premium bracket, but there’s a good chance that this one will have the most adventures. 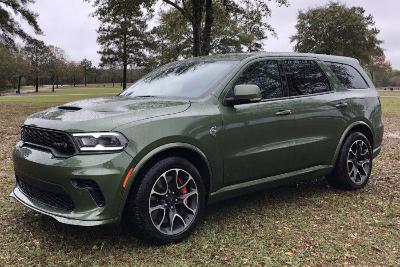 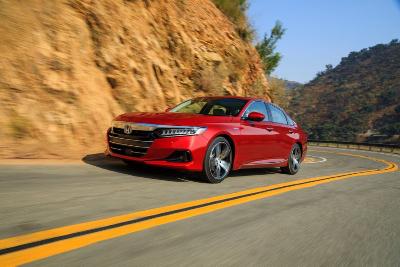 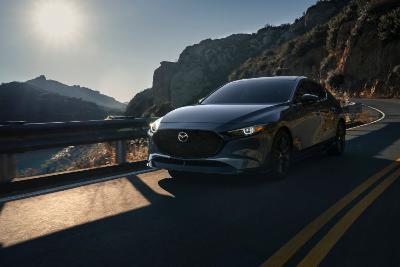 About the Land Rover Defender

Land Rovers are luxury SUVs, but the Defender isn't really a typical Land Rover. The 2020 Defender has a base price of just below $50,000. This means that anyone who is really looking to use the utilitarian features and treat the vehicle like the true off-roader it is, will probably be able to afford one. However, the Defender, like most Land Rovers, can be seriously luxury optioned. The top of the line 110 X trim will set buyers back around $80,000 before options. No matter the Defender, buyers will have a vehicle that looks like nothing else on the road, with a presence and cool factor that go a long way towards justifying any price one might pay.