The 2014 Cadillac XTS Vsport is yet another sign that Detroit's nascent luxury brand is very serious about challenging the best from Europe and Japan.  It would have been easy for Cadillac to focus on the sportier members of its sedan line-up - the entry-level ATS and the mid-size CTS - and ignore the XTS as a placeholder model designed to keep fans of the automaker's old-school, floaty full-sizers in the family.  With the introduction of the Vsport model it's clear that this is not the case, as the car packs a serious horsepower punch that's delivered with a surprising level of technological sophistication.

The 2014 Cadillac XTS Vsport may represent the pinnacle of the big Caddy family, but is it enough to sway potential buyers of rivals like the Audi A6, BMW 5 Series, or Hyundai Genesis sedan?  I spent a week - and almost 1,000 highway miles on the way to the New York Auto Show and back - with the car in an attempt to answer that very question

The 2014 Cadillac XTS Vsport is split across two trim levels: Premium and Platinum.  The Vsport Premium model (MSRP $63,020) represents a hefty $19,000 hike over the entry-level edition of the XTS, but in addition to its drivetrain upgrades it also comes with the CUE interface, LED interior lights, three zones of automatic climate control, heated and cooled leather seats with power adjustment, an LCD gauge cluster, automatic HID high beam headlights, a head-up display, a number of active safety features, and 20-inch rims.  The Vsport Platinum (MSRP $70,020) adds a panoramic sunroof, power sunshades out back, an imitation suede headliner, adaptive cruise control, extra chrome, and extended leather throughout the cabin.

My tester was a 2014 Cadillac XTS Vsport Platinum that featured the option of a rear seat entertainment system.  The total MSRP for the vehicle I drove for a week came to a whopping $71,615.  In case you're keeping score, about the same price you'd pay for a base Audi S6, which is about as powerful as the Vsport and almost the same size.  It's also close to the same amount of cash that you'd fork over for the Lexus LS flagship sedan.  In other words, Cadillac has set the bar very high for XTS Vsport Platinum from a pricing perspective.

The 2014 Cadillac XTS Vsport doesn't deviate too far from the big car styling playbook already established by GM's shared full-size Epsilon II platform.  More bulbous than its  Buick LaCrosse cousin, the XTS Vsport does streamline things a bit up front through the addition of a sportier grille.  20-inch rims also do a better job of filling up the sedan's tall arches.  I like the XTS a lot from certain angles, particularly in profile and when seen at front three-quarter.  From the rear, things are a little less graceful, as the short deck and quick slope of its back window give it a somewhat abrupt character.  One thing that Cadillac has definitely managed to accomplish with the XTS is to give it an imposing personality: when it's parked, you notice it, and when it's sidling up alongside you in traffic, it comes across as sufficiently stately and not overly flashy.  Think 'ostentatious light' and you'll get the idea.

The wide-open nature of the Cadillac XTS Vsport's cabin imparts the sensation that you have stumbled into a much larger automobile.  The dashboard and center stack will be familiar to anyone who's piloted either the XTS or the CTS, as the CUE interface figures prominently, and a configurable LCD dash cluster adds color to the real estate directly in front of the driver.  Leather is everywhere inside the XTS Vsport, complimented by wood trim on the console and steering wheel.  I was discouraged that I could catch my finger on the wheel's laminated wood appliqué, which wasn't properly seated.  This isn't up to the standards of a $70,000 automobile, and planted the seed of doubt inside my brain about how well the rest of the interior would hold up over the course of ownership.

The 2014 Cadillac XTS Vsport is a plush place to spend some time, regardless of whether it's found in Premium or Platinum trims.  Driving from Montreal, Quebec to New York City for the annual auto show certainly gave me enough time to get my butt acquainted with the car's driver's seat, and aside from a tall position which had me feel like I was looking down over top of the hood rather than across it, I had no complaints.  The rear row is generous in terms of the space it affords passengers, and I could see hauling five people around inside the XTS Vsport with nary a complaint.  Trunk space is predictably huge, given the car's proportions: there's 18 cubic feet of total space back there.

It's quiet inside the XTS Vsport even with the car's 20-inch rims riding over rough pavement.  This surprised me a bit, as the car features Cadillac's HiPer front struts for added control and rides a slightly stiffer suspension system compared to the base XTS.  I never felt jostled by the car, even when dealing with the atrocious potholes common to Montreal roads.

Cadillac's CUE vehicle interface is a polarizing feature, as it does away with physical buttons for the vehicle's climate, communications, and entertainment controls and instead replaces them with capacitive touch panels and an LCD touchscreen.  Personally, I'm of two minds when it comes to CUE, as I like the haptic feedback from the LCD screen as well as the way it responds to the presence of my hand before I even make contact.  I don't appreciate the lag when using the touch panels to turn up the stereo, or adjust the air conditioning.

One aspect of CUE that works almost flawlessly is its LCD gauge display.  You can play around with this feature to your heart's content, moving information around the screen, choosing different layouts, and customizing what you want to see until you have a completely personalized readout.  There aren't too many rules with the gauge panel, which means you can duplicate displays if you want to or even see them provide the same information in analog or digital formats.  It's a great feature, especially on a long trip when you're understandably curious about how long you have left to go and how many miles are remaining before the next pit stop, as it integrates perfectly with the navigation system.

The 2014 Cadillac XTS Vsport comes with electronic stability control and traction control (which can be completely turned off), seat-mounted side impact airbags front and rear, knee airbags for forward occupants, dual forward airbags, and side curtain airbags.  The OnStar telematics system is also included free of charge, and it can do things like track a stolen car or automatically call for help if you are involved in an accident.

The Vsport Premium trim also comes with a blind spot monitoring system and a lane departure warning feature, each of which makes use of GM's excellent safety alert seat technology that vibrates either side of the bottom cushion to let you know where danger might be approaching from (Premium also includes a forward collision alert system).  The Platinum model I drove added adaptive cruise control which can automatically bring the car to a complete stop in bumper-to-bumper traffic.

The 2014 Cadillac XTS Vsport is the beneficiary of a twin-turbocharged edition of the same 3.6-liter V-6 that is standard in the base model of the sedan.  The unit produces 410 horsepower and 369 lb-ft of torque, which is enough grunt to accelerate the big car to 60-mph in a scant 4.9 seconds.  Helping to corral all of that output is a six-speed automatic transmission as well as no-charge all-wheel drive.  Fuel economy for the car is listed at 16-mpg city and 24-mpg highway, and I saw roughly 20-mpg overall during my road trip.

Stuffing a 410 horsepower, twin-turbo V-6 under the hood of the 2014 Cadillac XTS Vsport was an inspired decision, as it gives the hefty sedan the requisite level of 'oomph' to be taken seriously by luxury shoppers.  Hammer the Vsport's throttle and you'll be rewarded with a surge of boosted torque that does an excellent job of zipping the four-door from 45 to 75 miles per hour, and it's also no slouch from a dig.  Nary a hint of torque steer can be felt through the HiPer struts up front, and the six-cylinder's exhaust note is sufficiently throaty to curl a smile while traveling through an underpass.

If you were hoping for handling to go with the XTS Vsport's muscle car bravado, then unfortunately you are going to be disappointed.  Fast in a straight line and effortless on the highway, the XTS Vsport falls flat when pushed to take a corner in boisterous fashion.  Understeer, body roll, and a general unwillingness to party define the automobile's dynamics, leaving it trailing more rewarding cars like its own CTS sibling.

The focus on power over dexterity is perfectly illustrated by the car's paddle shifters: tug on them with the car in Drive and they accomplish nothing - you have to shift over to M on the center console in order for them to engage.  Even then, M doesn't light up, but instead the word 'Sport' appears on the dash to let you know that you have indeed chosen the most aggressive shift pattern available.  There's no adjustable suspension system available either, but the car does feature magnetic ride control, which automatically adjusts shock performance to current driving conditions.

I don't want it to sound like I'm putting the Cadillac XTS Vsport down via this litany of non-sport sedan characteristics.  I honestly think that a fast, comfortable, and stylish people mover was the perfect template to use when designing this vehicle.  It's important, however, that potential buyers go into their Vsport test drive knowing that they won't get the same level of handling satisfaction from the XTS as they would from a 5 Series.

The 2014 Cadillac XTS Vsport comes closer to satisfying Cadillac's quest for a touring sedan that balances the brand's traditional luxury values with the demands of the modern luxury market than any that has come before it, eclipsing even the original STS.  Those who want a modern ride that can zip along the interstate for hundreds of miles with absolute authority while providing a high level of comfort will be perfectly happy with the XTS.  Drivers who want more engagement from behind the wheel will unquestionably be more content with the CTS Vsport - which, I should add, can be acquired at a hefty discount when compared to its full-size sibling.

And therein lies the rub: the Cadillac XTS Vsport is too expensive for what it has to offer, at least in Platinum trim.  This is a car that should be serving as a brand ambassador to those turned off by the sticker shock of a European luxury ride, but instead it offers no incentive for long-time Germanophiles to switch teams.  I'm afraid that give the high cost of entry, few will get the chance to discover what a competent car the XTS Vsport truly is.

GM Canada supplied the vehicle for this review. 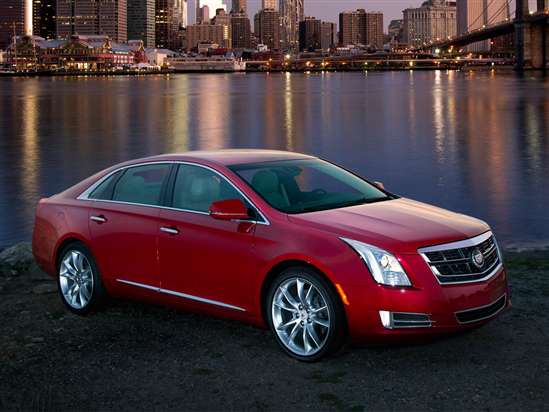