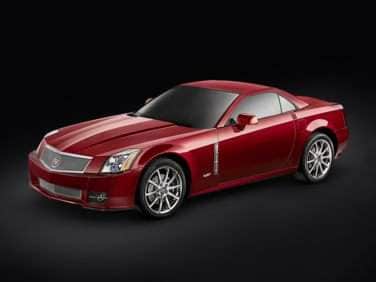 All About Cadillac XLR-V

The Cadillac XLR-V was a performance coupe that was produced by the luxury automaker from 2003 until 2009. The XLR-V was the higher performance version of the Cadillac XLR, a front-engine, rear-wheel-drive coupe convertible that was closely related to the Chevy Corvette sports car and was designed to be the flagship sports car of the Cadillac brand. The Cadillac XLR and XLR-V were assembled at a General Motors production facility in Bowling Green, Kentucky, in the United States. The Cadillac XLR was introduced at the North American International Auto Show in Detroit in 2003, and was released as a 2004 model year vehicle. The Cadillac XLR-V followed a year later, teasing customers by being previewed in a Super Bowl commercial that year with a formal introduction later at the New York International Auto Show. The XLR-V was released in the United States in early 2006, and at the time, it was one of the most expensive vehicles in the General Motors lineup. Production of the Cadillac XLR and XLR-V ended in 2009.

Standard features for the Cadillac XLR-V included remote keyless entry and ignition, 19-inch alloy wheels, dual zone climate control, climate controlled leather seats, wood interior accents, side airbags, a high end Bose audio system with nine speakers, and a DVD player and navigation system integrated into a seven-inch control screen integrated into the dashboard. Over the years, options such as an Alcantara headliner were added, and the XLR-V’s interior was treated to some textile refinements that helped smooth down some of the harder surfaces found in the cabin of the base XLR.

The Cadillac XLR-V borrowed its drivetrain from the Cadillac STS-V, which happened to be similar to that found in the base XLR. Though the Cadillac XLR also boasted a Northstar V8 engine with a displacement of 4.6 liters, the XLR-V upped the ante by reducing displacement to 4.4 liters to increase durability, then adding a supercharger to the mix, which built into the intake manifold along with four intercoolers. This combination yielded 443 horsepower and a 0-60 acceleration time of 4.6 seconds, and a 0-100 time of 11.3 seconds. The car’s top speed was limited electronically to 155 miles per hour. The Cadillac XLR-V was fitted with a six-speed automatic transmission. 19-inch wheels were necessary to fit over a larger set of brake pads and calipers borrowed from the Z51 Chevy Corvette.

Though the body of the XLR-V was shared with the XLR, the extra power meant that Cadillac needed to make some upgrades. The suspension was improved thanks to the addition of a solid front anti-roll bar and a rear anti-roll bar, stiffer control arm bushings, and recalibrated ride quality. Adjustable stability control and traction control allowed the driver to customize the driving experience somewhat, although the stability control could not be turned off completely. The retractable hardtop of the Cadillac XLR and XLR-V was constructed of aluminum for its light weight and strength, so as to affect weight distribution and handling as little as possible.