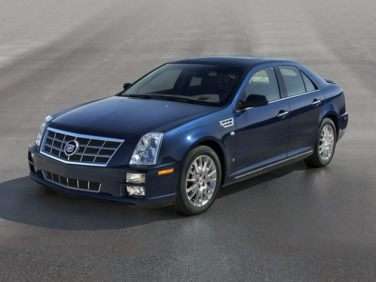 All About Cadillac STS

The Cadillac STS is a four-door, five passenger luxury sedan. The Cadillac STS first graced showroom floors in 2005 as a replacement for the popular Cadillac Seville. The Seville had ended its production cycle as the sportiest large sedan from the luxury automaker, but Cadillac had made the decision to up the ante even further by introducing a new platform which was rear-wheel drive and re-designed to further explore the company’s angular visual style.

The Cadillac STS was refreshed in the previous model year in order to bring its appearance more in line with the popular, trend-setting CTS sedan. The changes to the exterior were subtle, but tightened the design and gave it a more aggressive feel. Under the hood, a 3.6 liter direct-injection V6 is now the standard engine choice, making 302 horsepower with excellent efficiency and fuel mileage for a car of its size – 17 miles per gallon in the city, and 26 on the highway in either rear-wheel or all-wheel drive trim. There are two optional V8’s available for drivers who crave a little bit more go underneath their right foot. The first is the 4.6 liter Northstar engine which has been a Cadillac mainstay for many years. In the STS it generates 320 horsepower and 315 lb-ft of torque, making it an excellent option for effortless highway driving. A six-speed automatic transmission is mated to each motor for quick, smooth shifts.

The third V8 option can be found in the ultra-high performance STS-V edition of the sedan. This vehicle uses a supercharger to squeeze 469 horsepower and 439 lb-ft of torque out of a 4.4 liter version of the Northstar engine. Brembo brakes and an upgraded suspension system help to make sure that the STS-V is able to obey a driver’s every command at high speed.

All versions of the STS come with a plethora of luxury features, such as rain-sensing windshield wipers, adaptive cruise control, heated and cooled seats and an excellent Bose entertainment system. The STS is also offered with OnStar Turn-by-Turn navigation, which uses voice commands to direct drivers to their destination. Advanced StabiliTrak even incorporates a feature which can physically turn the steering wheel during a skid in order to help regain control.

The STS is also loaded with interesting technologies such as a lane departure warning system and a blind-spot monitor which uses radar to alert drivers of any vehicles which may not be visible in their mirrors. If greater luxury is required, then the STS, like most Cadillacs can be ordered with a Platinum package which upgrades the quality of interior materials and adds a few more bells and whistles such as 18-inch wheels.

While the STS has been a popular vehicle during its short production run, Cadillac has announced that they will be removing it from production along with the DTS in order to combine them both into a large sport sedan to go on sale in 2010. Until that comes to pass, the STS makes an excellent choice for anyone looking for a great combination of comfort and performance in a full-size vehicle.

The Cadillac STS has gone through a few changes in its most recent incarnation. The 2009 models have had several exterior color option changes. Gone are Sunset Blue, Blue Chip, Light Platinum and Radiant Bronze. The new colors that are offered in 2009 include Blue Diamond Tricoat, Black Ice and Radiant Silver.***** The 2009 STS no longer has the 18” by 8” chromed or polished aluminum cast wheels. Both of these wheel types have been deleted as options. Another deleted option is the Preferred Equipment Group that was offered on previous model years.

There are a number of new features added to the STS in 2009. The navigation radio in the vehicle now has a Speed Limit notification system to help drivers avoid speeding. The antenna on the new vehicles is now body colored. The interface for a Bluetooth phone is now available on all STS models. The Platinum Edition STS does have 18” by 8” chromed aluminum cast wheels. The Platinum Edition also has a new headliner material made from ultra-microfiber for extra comfort. The DIC has Japanese as a new language. Some models of STS have 18” wheels available.

The STS has just one trim level in 2009, but it comes with two different engine options. The base model has a 3.6 liter, V6, 302 horsepower engine. This engine makes use of variable valve timing in order to deliver a stronger thrust and better performance. It gets 17 miles per gallon in the city and 26 on the highway. The V8 model has a 4.6 liter, V8 engine that gets 320 horsepower. It gets 15 mpg in the city and 22 on the highway. Both STS types have a six-speed automatic transmission system that does have some manual control. The STS is available with either all-wheel or rear-wheel drive.