The market for midsize luxury crossovers is seeing both strong competition and strong sales, which helps explain the situation with the 2016 Cadillac SRX. Though still a relatively popular choice in its own right, the SRX is being replaced in the Cadillac lineup by a next-generation entry known as the 2017 XT5. For Autobytel experts—and customers—that creates a potential high-value sales scenario, since dealers may be more eager to negotiate on the current SRX to make room for the new XT5.

And again, the SRX continues to offer noticeable benefits versus its rivals from other brands. Cadillac specifically singles out the Lexus RX, Mercedes-Benz M-Class (now the GLE), BMW X3 and Audi Q5 as competition for the SRX, yet as detailed in this review, shoppers may not always find these models directly comparable in the real world. This is why we've also included the Lincoln MKX as a possible alternative to the Cadillac.

Now, there are some surprising omissions from the SRX at that price point—e.g., the standard model lacks a rear-vision camera—but there are luxury tech cues like Bose audio and a mobile Wi-Fi hotspot. Also, the SRX Luxury Collection trim, with an MSRP of $43,640, ups comfort levels considerably with standard leather seating, heated and cooled front seats, a heated steering wheel and an UltraView sunroof.

The Premium Collection then represents the range-topping trim for the 2016 SRX, and shoppers will note that the MSRP for this vehicle, at $48,920, is about $2,200 less than the basic Mercedes-Benz GLE. Despite that pricing disparity, the Cadillac comes with heated and ventilated front seats, heating for outboard rear passengers, and Cadillac's full suite of driver-assistance measures.

Cadillac claims that "performance is integral" for its midsize crossover, and that's reflected in the vehicle's standard and only engine choice, a 3.6-liter V6 with direct injection and lightweight construction. Indeed, because a lowered curb weight is vital for increased athleticism, engineers developed an integrated cylinder-head/exhaust manifold design for the 2016 Cadillac SRX that reduces engine weight by 13 lbs.

In terms of output, the SRX serves up more standard horsepower (308) than any of its rivals, as well as more standard torque (265 lb.-ft.) than all but one. True, some competitors come close to that, but the horsepower differences are particularly large if you contrast the Cadillac with the BMW and Audi entry models. Both the X3 and Q5 provide smaller 4-cylinder turbos as their standard engines, with those units limited to 240 and 220 horses, respectively.

The SRX additionally meets crossover-customer needs with an available all-wheel drive system, in this case one that relies on an electronic limited slip differential that can vary torque distribution from one side of the rear axle to the other, for both optimum grip when things start to slip and improved cornering capabilities.

High-tech toys are common in many upscale vehicles, but the 2016 Cadillac SRX still gets a competitive advantage against some of its rivals, thanks to an OnStar-enabled mobile Wi-Fi hotspot and 4G LTE connectivity. This technology is increasingly in demand by premium customers, yet while it's standard for the SRX, the Germans charge extra for the feature and it's not offered at all by either the Lexus RX or the Lincoln MKX.

SRX infotainment is handled by Cadillac's CUE system with an 8-inch LCD touchscreen. That screen supplies easy-to-see icons, haptic feedback and the ability to recognize smartphone-style touch commands, all for a simplified user experience that's complemented by advanced voice recognition. For a further bonus, the screen also automatically lifts out of the way to reveal a hidden storage bin, complete with a built-in USB port for device connectivity.

As mentioned, Bose furnishes a premium soundtrack for the SRX, starting with a standard 8-speaker setup and then allowing customers to step up to a 10-speaker, Centerpoint Surround system with active noise cancellation for a lux-style listening experience.

Nor has Cadillac forgotten about second-row passengers. With an available rear-seat entertainment system, those folks can enjoy independently operated, dual 8-inch screens mounted on the back of the front-seat headrests, each of which can be used for movies or gaming. Two sets of headphones, a remote control and Blu-Ray compatibility are included as well.

Cadillac additionally leverages its signature lighting cues for the SRX, from its vertically oriented headlamp and taillamp treatments to its LED "light pipe" front-fender accents. Also, in keeping with the brand's focus on technology, the Twilight Sentinel feature is standard on the SRX, to automatically turn on exterior illumination as daylight fades, and up-level SRX trims welcome adaptive forward lighting. That latter technology turns on the front lights as the front wheels turn, brightening the path ahead of the SRX even in turns.

The 2016 Cadillac SRX is 190.3 inches in length, so it is roughly the same size as the Lexus RX, Lincoln MKX, and Mercedes-Benz GLE; the other two rivals, the Audi Q5 and BMW X3, are at least half a foot shorter than the Cadillac, with a correspondingly less imposing road presence. Shoppers who appreciate the bold style of premium SUVs also will find much to like in the Cadillac's chiseled sheet metal and robust grille design—something that's distinctly missing from the X3.

It's not just all the premium benefits that make the 2016 Cadillac SRX so popular. It satisfies the requirements for crossover customers, too. Consider how the SRX stacks up against the Lexus RX: Even though the RX is a few inches longer than the SRX, the Cadillac's 29.9-cubic-foot rear cargo hold behind the back seats can carry 62.5 percent more than in the Lexus. Needless to say, the SRX also has more total cargo space than the RX, as folding down the rear second row opens up 61.1 cubic feet of storage capacity. Meanwhile, a standard cargo management system in up-range SRX trims helps owners make the most of that extra room.

Perhaps unexpectedly, the 2016 Cadillac SRX joins the BMW and Lincoln on the sidelines in IIHS Top Safety Pick testing, but it did earn a 5-Star Overall Safety Score from NHTSA, for both front- and all-wheel-drive configurations. Audi and the FWD Lexus are 4-Star performers, with the Mercedes unrated at this time.

The SRX supplies an especially wide variety of proactive high-tech safety measures, however, with two premium bundles: The Driver Assist package provides adaptive cruise control, automatic-collision preparation, and front and rear automatic braking, with the Driver Alert package pitching in with forward-collision alert, lane-departure warning, automatic high beams, and the GM-exclusive Safety Alert driver's seat. Equipped with that feature, the SRX can vibrate the driver's seat to provide a tactile alert about vehicles on the road around the Cadillac. An extra measure of awareness comes because the vibrations are felt on the same side of the seat that represents the direction of those other vehicles.

It's worth pointing out as well that the stylish front end of the 2016 SRX has been engineered to meet the same pedestrian-protection standards now in place throughout Europe.

There's no getting around the fact that the 2016 Cadillac SRX isn't quite at the leading edge of the premium midsize crossover segment. The Cadillac contender in that position is the brand-new 2017 Cadillac XT5. That said, the SRX is a comfortable, powerful entry with a still-fresh exterior design and owner-friendly levels of versatility. Also, since the SRX is backed by GM's OnStar technology, it is able to match some rivals—and exceed others—with a mobile Wi-Fi hotspot and 4G LTE connectivity that are becoming increasingly important for owners at all price ranges.

Speaking of which, the actual price of the Cadillac SRX could be another key for shoppers, as the vehicle's relatively low cost - a base MSRP of $37,605 - and pressure from that XT5, do open up a potential value play for premium customers. 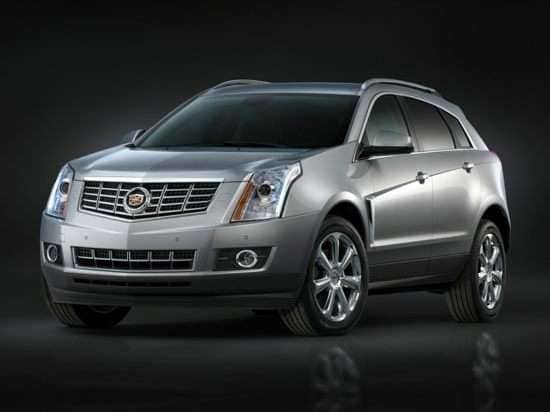