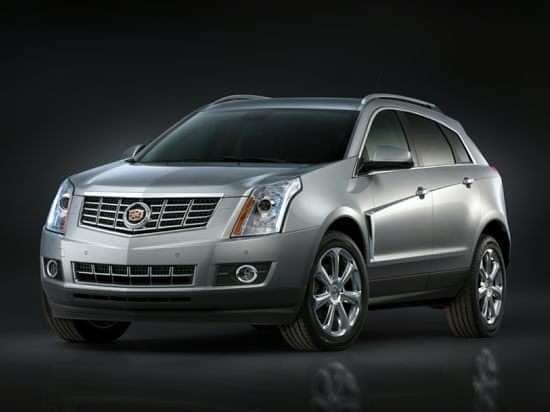 Changes for the 2014 Cadillac SRX:

Few changes are made to the 2014 SRX. Intellibeam headlights are added to the optional Driver Awareness Package, and Luxury models can be optioned with chrome wheels. Three new exterior colors and a new Caramel interior color are available for 2014.

Standard, Luxury, Performance, and Premium “Collection” versions of the 2014 Cadillac SRX are on sale.

Every 2014 Cadillac SRX is equipped with a 3.6-liter V-6 engine generating 308 horsepower. A 6-speed automatic transmission delivers the power to the front wheels. All-wheel drive is optional.

The National Highway Traffic Safety Administration (NHTSA) gives the 2014 SRX a 5-star overall crash-test rating. As this vehicle summary is written, the Insurance Institute for Highway Safety (IIHS) has not rated the 2014 SRX. In 2013, the essentially identical model received the best rating of “Good” in the moderate overlap frontal-impact test, the side-impact test, the rear-impact injury prevention test, and the roof crush strength test.

The 2014 SRX is equipped with a standard Cadillac User Experience system, or CUE. Featuring natural voice recognition and proximity sensing, the 8-inch CUE touchscreen also offers haptic sensory feedback and the ability to pinch, spread, and swipe content just like a tablet computer.

OnStar telematics is also standard, and it includes Automatic Crash Response service, which helps to speed emergency personnel to the scene of an accident following an airbag deployment. A RemoteLink App allows the SRX owner to remotely access certain vehicle functions using a smartphone, and FamilyLink location sharing is available as an opt-in service.

All SRX models except the Standard version are equipped with Side Blind Zone Alert and Rear Cross Traffic Alert. Options include a reversing camera, Intellibeam headlights, Adaptive Forward Lighting, a lane departure warning system, an adaptive cruise control system, Front and Rear Automatic Braking, Forward Collision Alert, and a Safety Alert Seat that vibrates depending on which side a potential threat exists.