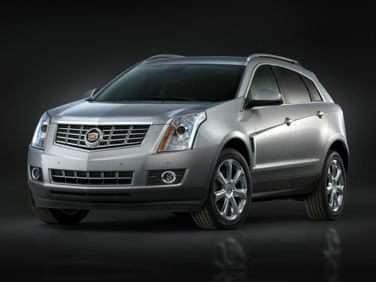 All About Cadillac SRX

The Cadillac SRX is a four-door, up to seven passenger luxury crossover. In the mid-2000’s Cadillac decided that they had space in their lineup for a mid-size crossover vehicle. While the large Escalade SUV had been a success, Cadillac had nothing to compete with the smaller crossovers and sport-utility vehicles which were cropping up from both Lexus and Acura. The Cadillac SRX was introduced in 2004, and the same platform underpins the current edition of the crossover.

The Cadillac SRX has a mish-mash of styling cues. While the standard Cadillac grille and headlights grace the front end of the car, the rear panels and roofline rise up to a somewhat angular skirt spreading out over the vehicle’s hindquarters. The effect is as though a station wagon and a minivan were combined to create a vehicle with a large greenhouse and high ground clearance.

Appearances aside, Cadillac has done their best to make sure that drivers and passengers get to their destinations as comfortably and quickly as possible. Buyers can choose between either a 3.6 liter V6 engine which makes 255 horsepower, or a 320 horsepower Northstar V8. Each of these technologically advanced motors uses variable-valve timing and electronic throttle control to help pump out the maximum amount of power while still preserving fuel economy. The V6 makes do with a 5-speed automatic transmission, but the Northstar is only available with a 6-speed auto. All-wheel drive is optional, and rear wheel drive is standard. While there is no V performance edition of the SRX, a sport package can be had which incorporates some of the same exterior styling cues, as well as 20-inch wheels and a limited-slip differential.

The SRX offers a seating capacity which rivals even the enormous Escalade. Up to seven passengers can fit themselves into the crossover when the optional third row seating is installed. If there is a greater need to haul cargo instead of people, everything behind the two front seats can fold flat, creating ample storage room. Third row seats can even be replaced by a specialized cargo compartment which allows for greater management and control over the objects and luggage being transported.

In terms of luxury, the SRX offers everything that buyers have come to expect from Cadillac. Heated leather seats, front and rear air conditioning, and a Surround Sound DVD system help to make the miles pass smoothly. The cockpit of the vehicle is hand-built, and as with all General Motors products, the SRX also comes with the OnStar service installed.

While it would be difficult to mistake the SRX for a sporty vehicle, the 320 horsepower V8 does provide a significant amount of motivation – more than enough to help it keep pace with the Japanese crossovers it is competing against. For 2010, Cadillac plans to produce an entirely new version of the SRX based on a platform developed for the Saab 9-4X. This new vehicle will shift to front-wheel drive, and will most likely adopt a more truck-like appearance. This will bring it more in line with the overall Cadillac look, and could open the door for the introduction of an entry-level sized SUV from the luxury automaker.

The 2009 Cadillac SRX is very little changed when compared to the 2008 models. The overall design has proven popular enough that the few changes made are cosmetic in nature. One of the most noticeable changes is likely the color choices that are available for the exterior. The colors Radiant Bronze, Blue Chip, Sunset Blue, and Light Platinum have been discontinued from the color options. Replacing those colors are the new choices of Black Ice, Blue Diamond Tricoat, and Radiant Silver. The only other change to the new models is that a few of the options packages have been reshuffled to include different options.

There are two 2009 Cadillac SRX trim levels: the V6 and the V8. The V6 has a 3.6 liter, V6 engine with 255 horsepower. It has a power driver seat, rear parking assist system, leather seats, a rearview mirror with auto-dimming, 17-inch alloy wheels, the OnStar system and a dual-zone climate control system that works automatically. The V6 also includes a Bose audio system that features eight speakers, an auxiliary audio jack and satellite radio.

The V8 trim has a 4.6 liter, V8 engine with 320 horsepower. It not only has a larger engine, it has larger wheels as well. It features 18-inch alloy wheels, heated seats in the front, wood accents, a six-CD changer, xenon headlamps, driver seat presets, pedals that are power adjustable and a powered passenger seat in front. Many of the standard features on the V8 are options on the V6 trim models.

Options for both trim levels includes a separate system for cooling the rear seats, a DVD entertainment system in the rear, Magnetic Ride Control, a third-row seat with power folding, a steering wheel that is heated, a navigation system, a surround-sound stereo system and a super-sized sunroof that features an “UltraView.”