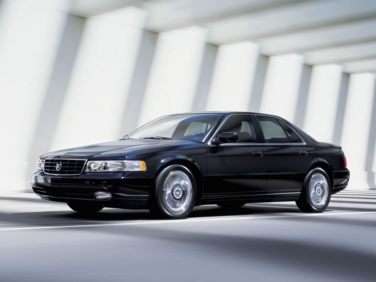 All About Cadillac Seville

The Seville name has been used on several different Cadillacs stretching all the way back to the 1950’s. The Seville has had a number of incarnations over the years, but those that are the most familiar to automobile fans are the four-door sedans which began production in 1975. These square, conservatively-styled vehicles would become a staple of the modern Cadillac lineup, and by the time the 1990’s rolled around the Seville had morphed into a full-size performance sedan that followed the Eldorado coupe’s lead in terms of styling.

The 2004 Cadillac Seville represents the ultimate refinement of Cadillac’s engine and technology programs. On the outside, the Seville’s quiet confidence and muscular flanks hint at the high level of performance lurking beneath its civilized façade. The car looks chiseled, like a bodybuilder in an Armani suit, and this has contributed to the vehicle’s popularity across a wide demographic.

After the attractive exterior package, the Cadillac Seville’s most appealing feature is the 4.6 liter Northstar V8 that slumbers underneath the sedan’s long hood. Once awoken with the turn of the key, the engine bursts into life and makes available the full potential of its 300 horsepower and 295 lb-ft of torque in STS trim. SLS buyers have to make do with a slightly reduced 275 horsepower – still excellent numbers from a very responsive engine. Both trim levels use a 4-speed automatic transmission and acceleration is quick enough to put a smile on the face of even the most jaded driver.

The rest of the Seville’s chassis is also well put together, and works in harmony with the vehicle’s magnetic ride-control suspension in order to present a level of firmness that is ideally suited to the speed of the car and the road conditions it is faced with. Similar technology is used to vary the response of the steering rack. The final piece of the technology puzzle when it comes to vehicle performance is the advanced StabiliTrak traction control system that has become a celebrated feature across the Cadillac lineup. This system is able to control the vehicle’s brakes at each individual wheel as well as the throttle. By working them in concert it can help to avoid any dangerous loss of control, skidding or spinning which could injure vehicle occupants.

The interior of the Cadillac Seville is up to the standard set by the Eldorado, employing a similar level of wood trim combined with beautiful leather treatment for the seats and interior panels. The seats themselves are a compromise between comfort and support, providing a reasonable amount of side bolstering to prevent upsetting driver and passengers during spirited driving. A DVD navigation system, Bose entertainment center and OnStar in-car communications and support service are all available should drivers wish to load up on technological bells and whistles.

The Cadillac Seville was a popular seller for the luxury brand, but the decision to move ahead with a rear-wheel drive based vehicle lineup meant that the Seville was the odd man out at the end of 2004. It was replaced by the 2005 Cadillac STS, a very similar vehicle in form and function riding on a radically improved platform.