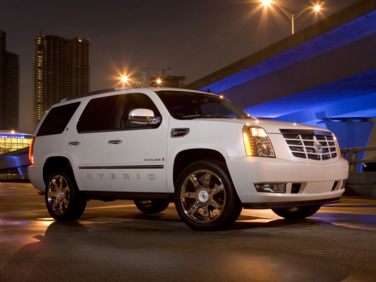 All About Cadillac Escalade Hybrid

The Cadillac Escalade Hybrid occupied a unique position in the market as the only luxury hybrid sport utility vehicle with enough seating for eight occupants (when the second-row chairs are swapped out in favor of the optional bench, that is). It was available in both rear-wheel-drive and all-wheel-drive configurations. The Escalade Hybrid uses a regenerative braking system that captures the vehicle’s kinetic energy and feeds it back to the electric motor to be stored or reused. A system called Active Fuel Management turns off half the engine’s eight cylinders when the engine is not under heavy load, in order to save gasoline. The 6-liter V8 gasoline engine, combined with two 60 kW electric motors and a battery pack, produces a total of 379 horsepower. The hybrid drivetrain is mated to what Cadillac calls a “two-mode” automatic transmission. The Escalade Hybrid’s 0-60 acceleration time is 8.2 seconds. The Environmental Protection Agency rated the Escalade Hybrid’s fuel economy at 20 miles per gallon city, 23 miles per gallon highway, and 21 miles per gallon combined, which beats the traditional gasoline Escalade’s combined rating by five miles per gallon. EPA ratings are the same for both rear-wheel-drive and all-wheel-drive versions.