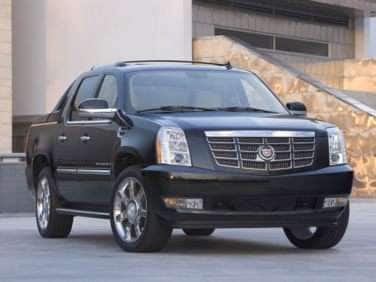 All About Cadillac Escalade EXT

The Cadillac Escalade is a full-size luxury SUV than has been available from General Motors since 1999. The Escalade was Cadillac’s first major foray into the sport utility vehicle market, and was developed and engineered to stave off strong competition from German and Japanese luxury brands, as well as the 1998 introduction of Ford’s competing full-size Lincoln Navigator sport utility vehicle. The first generation of the Escalade took only ten months from approval until production, although it shared many components as well as much of its design with the 1999 GMC Denali sport utility vehicle.

The first major update to the Cadillac Escalade was in 2002, to distinguish it visually from the GMC Denali, after a year-long hiatus for the 2001 model year. The Escalade EXT was released around this time, for the 2002 model year, and it was based on the Chevrolet Avalanche, a sport utility pickup truck that was released at the same time. The Cadillac Escalade EXT featured a pickup truck bed that could be extended into the truck’s cab through a hinged door at the bottom of the back cab wall. Though the Escalade was known for its ability to seat eight occupants, the Escalade EXT was an exception to this rule, due to its pickup truck bed. The Escalade EXT had four full size doors and the cab could seat five occupants. The Escalade EXT and the Escalade ESV were both built in Silao, Mexico, from 2002 until 2006. This model, which was the second generation Escalade although the first available generation Escalade EXT, was a rear-wheel drive vehicle with optional all-wheel-drive. A Vortec 6-liter V8 engine was also an available option for high-end buyers. For the 2003 model year, the Escalade lineup, including the Escalade EXT, was given an upgraded four-wheel version of the StabiliTrak electronic stability control system, and the Escalade EXT also got HID headlights. In the following years, the Escalade family got some standard features and options that were excluded from the EXT truck model, such as satellite radio and a tire pressure monitoring system; however, the omission of updates such as second row seating upgrades is understandable due to the EXT’s necessary truck-like seating configuration. In 2004, Cadillac introduced options such as 20-inch chrome wheels, climate controlled seating and cup holders, and new premium interior options.

The Cadillac Escalade family entered its third generation for the 2007 model year, including a redesigned extended wheelbase Escalade ESV as well as a redesigned Escalade EXT. Production moved to Arlington Assembly for this generation Escalade, except for the Escalade ESV and EXT, which remained in Mexico, and the vehicle was based on a completely new platform. The Vortec all-aluminum V8 engine was upgraded to a displacement of 6.2 liters and featured variable valve timing, mated to a new six-speed automatic transmission. The 2007 Cadillac Escalade with the Vortec V8 yielded 403 horsepower. Throughout the years, this generation of the Cadillac Escalade also featured a newly designed keyless entry system, updated gauges, Bluetooth wireless integration, an updated navigation system, power tilt steering wheel, standard blind spot assistance, updated tailllights and new exterior color options. Though the Cadillac Escalade is continuing the second generation through the 2014 model year, the Escalade EXT was discontinued along with the short-lived Escalade Hybrid as well as the Escalade EXT’s sibling, the Chevy Avalanche.