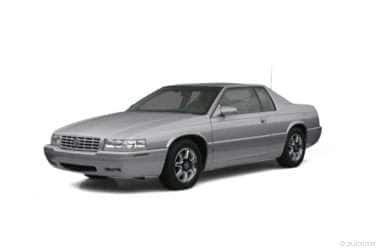 All About Cadillac Eldorado

Personal luxury is a concept that American automakers have been perfecting for decades. While European car companies tended to give their coupes roadster or sport attributes, Detroit manufacturers have never been shy about building full-size, two-door coupes with excellent power and a comfortable, luxurious ride. Cadillac and Lincoln were two domestic brands who kept the segment alive the longest, through the Eldorado and Mark series respectively. While competition in this class dropped off during the 90’s due to the move towards sport-utility vehicles, these two vehicles held the flickering torch as high as they could, for as long as they could.

The 2002 Cadillac Eldorado is an angular, bullet-shaped coupe with a strong, attractive front end and a short rear deck. The automobile stands out from the competition through its muscular good looks and sizable road presence, and this attitude is backed up by the snarl of a 4.6 liter V8. The Northstar engine found under the hood can be had in a 275 horsepower version for the base ESC model of the car, as well as a more potent 300 horsepower edition in the ETC or Eldorado Touring Coupe trim. A 4-speed automatic transmission helps launch the Eldorado ETC to 60 miles per hour in just 7 seconds, an excellent number for such a large car. Fuel economy is an acceptable 18 miles per gallon in town and 27 miles per gallon in highway driving.

The Eldorado’s interior feels spacious but at the same time personal, with beautiful wood touches and a well designed console contributing to the vehicle’s cockpit feel. Easy to read gauges are matched with steering wheel-mounted controls for both the stereo and climate management systems. Heated seats are available, and all versions of the Eldorado come with comfortable leather buckets. The rear seats suffer from the typical lack of space common to most coupes, but given the overall size of the Cadillac they are bearable for shorter trips.

The Cadillac Eldorado is definitely on the heavy side, but it makes excellent use of its engine’s wide power band to provide great throttle response at all vehicle speeds. The coupe does suffer from wheel spin during hard launches, even with traction control turned on, but this is a function of the front-wheel drive layout that is difficult to compensate for even with the high level of electronics stuffed into the Eldorado. Like most Cadillacs, the coupe uses a version of the company’s adaptive suspension which can vary the firmness of the ride based on road conditions. This works surprisingly well to insulate drivers from rough asphalt while still providing a modicum of connection to the road. The Eldorado’s StabiliTrak stability control system is top notch, keeping the vehicle pointed in the right direction in even the most inclement weather conditions.

2002 was the final year of production for the Eldorado, as Cadillac moved forward with a dramatic makeover for their entire vehicle lineup that focused on sedans and SUV’s. The next coupe offered by Cadillac, the high performance XLR, would not bow onto the scene until 2004.