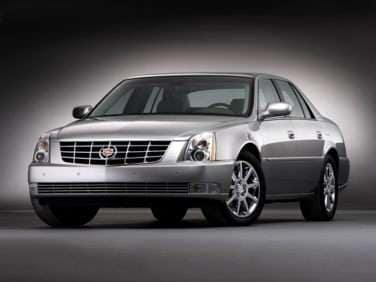 All About Cadillac DTS

The Cadillac DTS is a four-door full-size luxury sedan that seats up to six passengers that was discontinued in 2011 and replaced by the Cadillac XTS. The Cadillac DTS is manufactured in Hamtramck, Mich. alongside the Buick Lucerne. Main competition to the DTS includes the Lincoln Town Car, Mercedes-Benz S-Class and BMW 7 Series. While Cadillac has made a significant shift in their product lineup in order to reflect a new emphasis on performance and style, at the same time the company realized that it would do them no good to leave their established customer base without an example of the type of vehicle they had grown accustomed to buying from the automaker. The DTS represents an evolution of the large, comfortable front-wheel drive sedan which Cadillac became associated with throughout the 1980’s and 90’s.

Of course, the 2009 Cadillac DTS is far more refined than any of the large sedans which have come from the company before. The DTS is available in two different versions, with the standard DTS being complemented by an extended wheelbase version of the car intended to compete with the Lincoln Town Car and, to a lesser extent, the BMW 750Li. A full 8 inches longer than its regular wheelbase sibling, the DTS-L is specifically designed to provide extra privacy for rear-seat occupants.

Each version of the car is powered by a separate iteration of the 4.6 liter Northstar V8 which has long been the workhorse of the Cadillac lineup. The DTS-L is only available with the L37 engine, which has 275 horsepower and which is configured to afford better low-end response in order to facilitate moving the extra weight of the extended chassis. The standard DTS can be had with either the L37 engine or the LD8, which produces 292 horsepower in addition to providing sportier performance through greater peak rpm’s. Both vehicles employ a 4-speed automatic transmission to deliver power to the front wheels, and each feature a plethora of technologies designed to facilitate a safe and comfortable ride. The most notable of these are a magnetically adjustable suspension, Stabilitrak stability control and four channel antilock brakes.

Inside the DTS, driver and passengers alike can enjoy a number of luxury features which help to make each trip enjoyable. The front and rear seats are heated along with the steering wheel, and the front seats also offer a cooling feature. Dual-climate control is standard, as are high-grade leather seats and accents. Ordering the Platinum package gives drivers the choice between two exclusive interiors with wood accents, a sunroof, and DVD navigation and entertainment systems.

While the DTS is not designed as a sporting driver’s car, it does come with several technologies which are extremely useful on modern highways. Adaptive cruise control uses radar in order to keep the vehicle a safe distance from traffic in front of it, while a lane departure warning system lets drivers know if the vehicle has strayed from its intended course by using cameras to keep track of lane marking. This feature can be a lifesaver for those at the end of a long day of driving who are fighting to stay awake.

The Cadillac DTS is scheduled to be replaced for the 2010 model year by a vehicle which will be more in line with the current Cadillac design philosophy. Until that time, however, the DTS offers a comfortable, luxurious ride for those in the market for a large sedan.

The 2009 Cadillac DTS is the largest sedan made by Cadillac, and it remains largely the same as the 2008 models. The DTS was once called the Cadillac DeVille, and the newest models still bear a strong resemblance to the DeVille. There are a few small differences between the DTS model years, including the exterior color choices available. The new color choices are Gray Flannel, Radiant Silver and Ocean Pearl Tricoat.

Another addition to the 2009 models is the roof-mounted, body-color antennae for the vehicle’s XM Satellite Radio/OnStar. There are new ChromeTech, 17-inch aluminum wheels, XM NavTraffic, a speed limit advisor and a speed alert that is located in the driver’s information center. There are new brake rotors that are made with a ferritic-nitro carburizing system that inhibits rust. Also new to 2009 is the Bluetooth capable OnStar 8.0. There are new chrome rings added to the dashboard that surround the dials. The steering wheel of the 2009 DTS has a Cadillac crest in the center, unlike the bowtie shape of the 2008 steering wheels.

The seats of the 2009 models have new switches that control the heating and cooling of the seats. The new switches are easier to see during the daytime. There are also new features on the XM Satellite Radio display. The new display includes song titles and artist names for the music being played. The new control for the sunroof is easier to use on the new models and has a new feature that allows for faster closing.